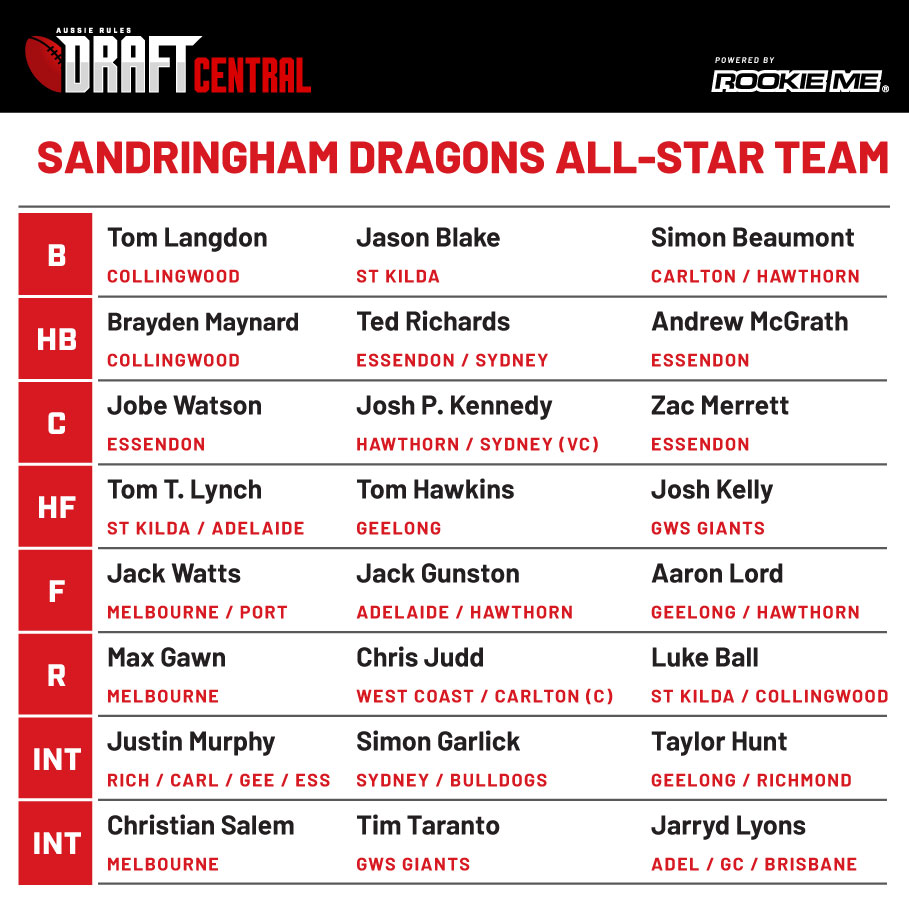 SANDRINGHAM Dragons have had no shortage of elite talents making their way into the AFL through the AFL Draft, with the last two decades being particularly fruitful. Led by captain, Chris Judd who was voted the All-Star Player of the AFL Draft era by you, the public, on our Instagram channel, the Dragons are certainly one of the stronger sides running around.

Sandringham Dragons only have half a dozen players who debut in the 1990s, with the majority of their talent coming in the 2000s, starting with the famous 2001 AFL Draft. With two of the top three from that year in Judd and Luke Ball, the Dragons have since become a powerhouse when it comes to churning out top-end draftees thanks to the close association with the private school system, similar to Oakleigh Chargers. Their midfield is elite, and they have plenty of scoring options up forward, and run out of defence.

The Dragons’ defence is well balanced with two negating talls in Ted Richards and Jason Blake, a third tall in Tom Langdon, and three players able to rotate between midfield and defence. Richards player 261 games and earned All-Australian honours, while Blake was as reliable as they came, though became famous for the longest stint without a Brownlow vote at one stage. Langdon has had his injury concerns of late, but at his best he slots into this side, originally drafted as an overager.

In terms of their medium types, former Blue and Hawk, Simon Beaumont is in the back pocket, though he could push up the ground as well. Current players Brayden Maynard and Andrew McGrath are others who could push into the midfield, but their dare, run and carry has been superb, with Maynard in All-Australian form and McGrath quickly becoming one of the best young talents in the AFL. Off the bench, Taylor Hunt and Christian Salem could both slot in, with McGrath’s Rising Star award the difference there.

Nothing short of an elite midfield, almost a dozen players could have a case to slot in here. In the end, we opted for consistency over the years, led by captain Judd who is the clear standout player with two Brownlows, six All-Australians, two Most Valuable Players (MVP)s, five best and fairests and a Norm Smith. Ball slots into the rover position because while he had his injuries over the journey, at his best he was a war horse and a crucial cog in some terrific St Kilda and Collingwood teams. Also on the ball is Josh P Kennedy who has won three All-Australians, three best and fairests and been in the All-Australian 40-player squad a further three times in 250 games.

In the front six, modern day forwards Tom Hawkins and Jack Gunston slot in as the keys, after three All-Australians, a best and fairest, five All-Australian squad nominations, and five premierships between them. Rotating as another tall in there is the often-maligned but incredibly talented Jack Watts, with Geelong and Hawthorn forward Aaron Lord in the other pocket.

Kelly is at half-forward an area he could easily play, while Adelaide’s Tom Lynch makes it onto the other flank after almost 200 goals in his 140-odd games. Justin Murphy and Simon Garlick are two players who could play through the midfield or up forward that have been named on the bench, with so many rotating midfield options making it tough to decide on a starting team.

Picking the bench was as difficult as any task, because you had to weigh up past contributions against the modern contributors. Matthew Robbins (146 games) and Stephen Powell (142) were the two players with the most games who missed out, while other talls in Danny Jacobs, Tyrone Vickery and Chris Dawes provide some good depth in the key position stocks. The next in line ruck was Robert Warnock (88 games), while Angus Brayshaw (80 games) and Ed Langdon (68) could well have deserved places in the team already, but will no doubt squeeze into there over time.