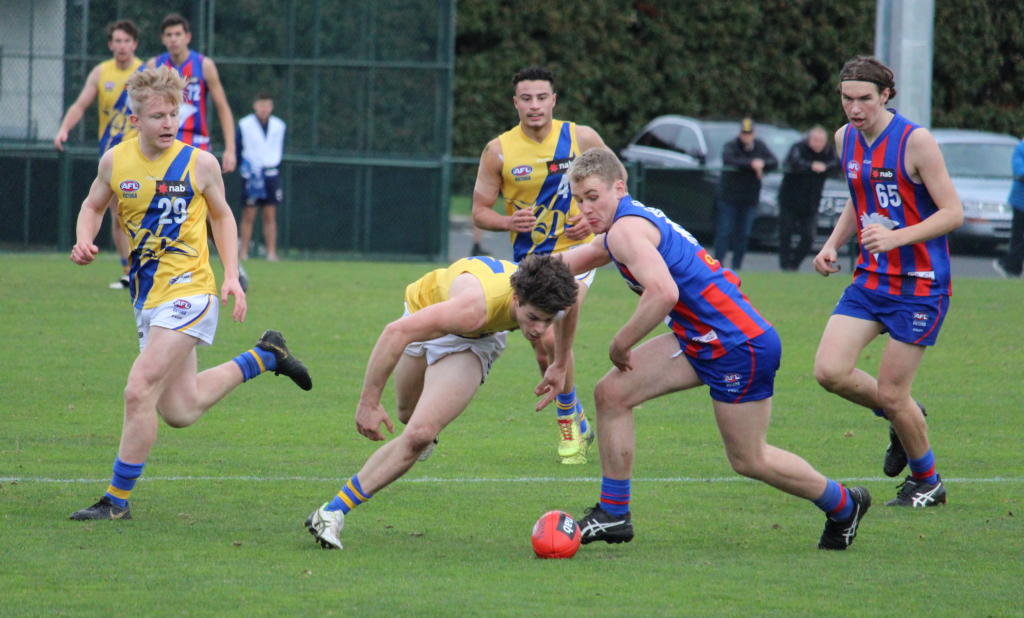 THE PENULTIMATE round of last year’s NAB League season saw Oakleigh and Eastern secure big wins en route to their respective top three finishes, with the Chargers going a game clear in third while the Ranges all but secured the minor premiership with a week left to play. In a shortened, four-game set of fixtures, Geelong made the trip down to Tasmania and Bendigo made its way over to Ballarat to complete a couple of close encounters, with only one game decided by more than seven points. Meanwhile, Calder, Gippsland, Murray, Northern, and Sandringham all enjoyed the bye.

The biggest margin of the round belonged to Oakleigh, as the Chargers coasted to a 22-point win over Western at Box Hill City Oval – the first of four unique venues used. After conceding a one-goal deficit to the main break, Oakleigh turned on the jets with six goals in the third term, while keeping Western scoreless. It made for a defining lead, as the Jets could only claw back to within four kicks after being as far as 39 points adrift.

Continuing the action on Saturday’s triple header, Geelong headed down to Tasmania to take on the Devils in a contest which went down to the wire. A Chris Seymour sealer with under three minutes left helped the Falcons edge home by seven points, after leading by as much as three goals in the second and third terms. The scores were levelled three times in an enthralling final quarter, with Tasmania twice taking the lead but unable to hold on. It was a decisive turnaround in form for Geelong, who had previously made a habit of falling away towards the end of games.

Charlie Sprague added another three-goal haul to his season tally, combining with Max Annandale (two goals) to make up over half of their side’s total of eight majors. The versatile defensive pairing of Oliver Henry (24 disposals, 11 marks) and Cam Fleeton (21 disposals) worked well for Geelong, with captain Jesse Clark (21 disposals, one goal) thriving through midfield. Fleeton’s worked doubled with a shutdown role on Jackson Callow, keeping the dangerous forward to one goal after a lively start. Oliver Davis was again Tasmania’s prime ball winner, accumulating 23 touches while North Melbourne rookie Matt McGuinness trailed closely with 20.

Saturday’s final fixture was another close one, with Eastern again finding a way to win, this time against a strong Dandenong lineup. The Stingrays weren’t quite able to snap their six-game losing run despite leading at two of the four breaks, with Eastern’s inaccurate tally of 5.16 (46) just enough to trump Dandenong’s 6.5 (41) at Shepley Oval. The win would put Eastern within touching distance of the minor premiership, with the four points proving crucial after a loss to Oakleigh in Round 15.

The sole Sunday fixture for the weekend saw Greater Western Victoria (GWV) take on the Bendigo Pioneers on home turf at Mars Stadium, with the home ground advantage enough for a four-point win in what was a high-scoring affair compared to the remainder of the round. The Rebels worked back from a five-goal deficit after half time, cutting it to three points with a quarter left to play, and eventually sneaking home via an Izaac Grant major at the death.

Bottom-ager Jack Ginnivan booted four goals in the losing effort as one of three Bendigo multiple goalkickers, while Grant and Collingwood draftee Jay Rantall made up half of the Rebels’ quartet to have claimed two snags each. Cooper Craig-Peters led all comers with 22 disposals for GWV, while Riley Wilson was the sole Pioneer to crack the 20-disposal mark.