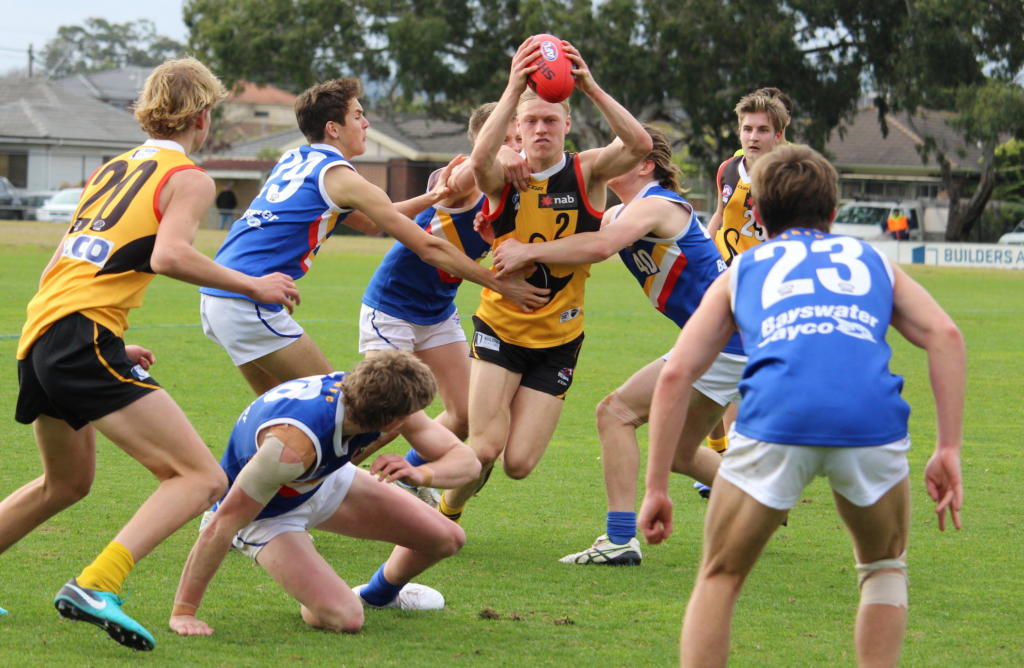 IF you are missing footy like we are, then let us somewhat salvage that with a look back in a new series of Classic Contests. In today’s contest we look at one of the would-have-been Round 16 clashes in the NAB League this year between the Dandenong Stingrays and Eastern Ranges. In this edition, we wind the clock back almost a year to August 2019, when the two sides slugged it out in a low-scoring thriller.

Conditions were not overly conducive to a footballing spectacle when the Dandenong Stingrays and Eastern Ranges met late in last year’s NAB League regular season, but the two sides managed to make a game of it at Shepley Oval. A win would see Eastern all but wrap up the minor premiership, holding a one-game buffer to second with only the ultimate round to be played, while Dandenong sat in a mid-table slump at 6-6-1, right in the middle of a six-game losing streak having started the season unbeaten across their first seven outings.

The two sides looked good on paper too, with Dandenong only missing Cody Weightman from its eventual handful of 2019 AFL draftees, while Eastern boasted its typical midfield core and a handy mix of under-agers, but were made to adjust slightly with Jamieson Rossiter absent from the forward 50.

After Ben Hickleton booted the first goal of the game in just under four minutes, it took a further half-hour of play and 11 behinds between the two sides before Dandenong could get a major on the board, through Corey Ellison. While it didn’t exactly burst open the floodgates, it represented a superior period of play for the Stingrays, as they snuck ahead by five points at the main break, largely thanks to Ned Cahill‘s first major near the end of the second term.

Having gotten a feel for the clearing conditions, the scoring ante was upped after half time as either side managed three goals, with the point of difference being Eastern’s inaccurate tally of 3.4, compared to Dandenong’s 3.0. The Stingrays’ lead got out to as much as 20 points midway through the term, but was pegged back to just one to set up a grandstand finish.

The scores were tied up twice throughout the final term, and Ellison’s second major made it seem as if Dandenong would accelerate towards victory, but a Harrison Keeling reply and the following five behinds from the Ranges helped them to an 11th win for the season, by that exact margin. With one hand on the minor premiership, the winning celebrations would have been even sweeter for Eastern.

Despite the two regions combining for just 11 goals, three multiple goalkickers game to the fore, with Cahill and Ellison bagging a pair apiece for Dandenong while Eastern skipper James Ross snuck forward in a revised role to also boot two majors. His efforts earned him best-afield honours for his side, with bottom-ager Clayton Gay named Dandenong’s best for his 15 disposals, six marks, and six tackles.

It was no surprise to see Hayden Young starring among the most prolific ball winners, racking up 26 touches to finish second behind only Jack Toner and Zak Pretty – a representative from either side. Mitch Mellis was another to earn plaudits from the Ranges midfield on the back of 24 disposals, while 16-year-old prodigy Tyler Sonsie was terrific for his 20 touches, five marks, six tackles, and five inside 50s.

The Ranges would inevitably go on to secure a remarkable minor premiership, rolling on into the grand final but falling well short in the decider to a rampant Oakleigh Chargers outfit. Dandenong finished the season at 6-8-1, but snapped its losing streak at the ideal time to sneak into finals with a win over Murray Bushrangers in Wildcard Round. The Stingrays would have five players drafted from their crop, outweighing the falling short in their premiership defence.