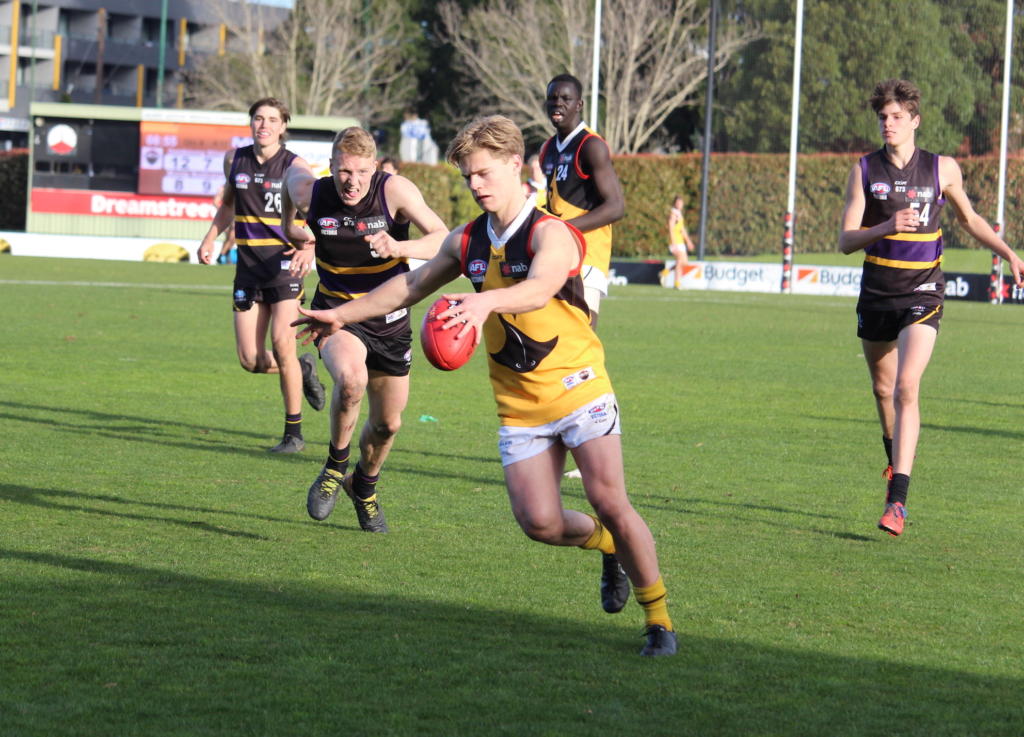 ROUND 7 of the AFL Premiership Season got underway last night, with a grand total of zero newcomers making it onto centre stage. But just one week removed from Izak Rankine‘s electric debut, a pair of Dandenong Stingrays could be set for a similar impact under Friday night lights, leading a list of eight potential debutants. There could also be a couple of club debuts throughout the weekend, pending the culling of extended squads. We take you through the list and give a little reminder of what each player may bring to the table.

If it weren’t for the crazy year we’ve already had, this would be one of the more remarkable stories of the season. Dandenong Stingrays graduates Ned Cahill and Cody Weightman will make their AFL debuts on Friday night, after both earning the call-up during the week. Given they’re likely to slot into a forward pocket at opposite ends of the field, it is unlikely the two will go head-to-head very often, but the fact that two good mates who played a heap of Under 18 football together will enter the elite level at the same time, is a stunning coincidence.

Weightman, taken with pick 15 in last year’s National Draft, is an exciting small forward who can take high marks and has a knack for booting bags of goals. The Bulldogs identified the need for a genuine small forward and got one with their first selection, with the faith carrying on to a relatively early berth. Cahill has a similar hunger for the contest, but is more of a standout with his work-rate and intelligent patterns inside forward 50. Both have a great set of skills and apply great defensive pressure, so should have an impact straight away.

Another Sydney 2019 draftee is set for a berth in the bigtime, with West Australian Elijah Taylor named in this week’s side. The Swans made four changes heading into their clash with Gold Coast, with Taylor a likely type to replace the combination of marking and scoreboard impact Isaac Heeney and Sam Gray leave in their absence. Taylor was taken with pick 36 in last year’s draft, but has all the makings of a top 20 talent with his ability to pull of mercurial plays and take games by the scruff of their neck. He can fly high, kick outrageous goals, and break the lines, but just needs to find a level of consistency. He promises to be one of the more eye-catching debutants this week, among a stacked field of them.

Carlton has again named Callum Moore among its extended squad, with the former Tiger one of two fresh faces threatening to crack the Blues’ side, while Sam Mayes is Port Adelaide’s proposed club debutant. Matthew Cottrell, another graduate of the Dandenong Stingrays program, could sneak his way into Carlton’s setup, with the Blues liking his running capacity and the pressure he brings as a small forward type. Moore could provide a third tall target to Carlton’s forwardline, while former Lion, Mayes is in line to slot in on the outside of Port’s side or off a flank at either end.

Both Fremantle and West Coast have named potential AFL debutants among their extended squads for Sunday’s Western Derby in a move which could spice up the clash even further. Lloyd Meek, Michael Frederick, and Tobe Watson are among five Dockers in line to replace the injured Nat Fyfe and Hayden Young, while Xavier O’Neill will have to compete with three other Eagles looking to scrape into the final interchange positions.

Meek, a hulking 203cm ruckman could be the next 200cm-plus player to feature for Fremantle. Frederick is an athletic outside midfielder/forward who lit up last year’s SANFL Under 18s after being overlooked in his draft year, with the Dockers taking a chance on him with pick 61. Watson is a 190cm rookie defender who has had to wait a couple of years for an opportunity, as has West Coast’s O’Neill, who boasts a great balance of inside and outside traits through midfield.