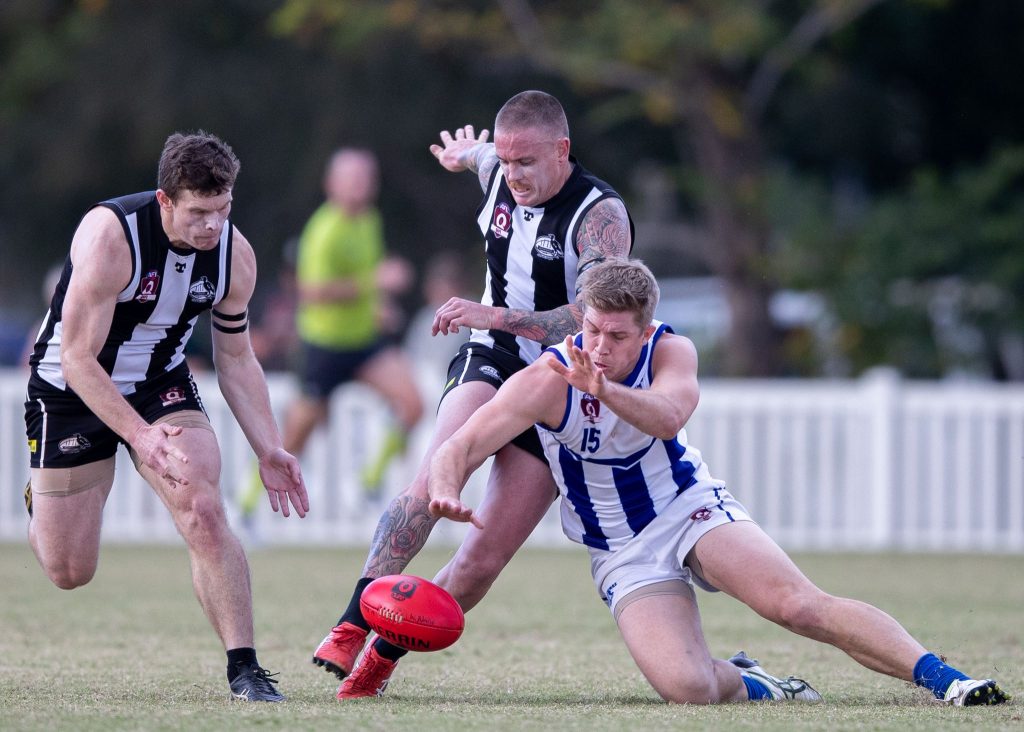 OUR feature Queensland Australian Football League (QAFL) Match of the Round is between Palm Beach Currumbin and Sherwood. The Round 2 clash sees a battle between the top two sides – albeit only one round into the season. Both had ultra-impressive wins last weekend, with the Lions dominating reigning premiers, Surfers Paradise in the grand final rematch by 43 points. The Magpies had a higher scoring affair against Mt Gravatt, but again got the job done by the exact same margin.

Three players in their respective teams booted four goals each, with Brody Lumber and Liam Dawson (both Sherwood) reaching the milestones, as Mitchell Johnson (Palm Beach Currumbin) achieved the feat for the ladder leaders. Both teams have former AFL talents on their list, with the likes of Dawson and Claye Beams running around for the Magpies, as former Gold Coast Suns big Ashton Crossley booted a goal in last week’s win for the Lions.

The two players nominated as their team’s best last week were Brock Askey (Palm Beach Currumbin) and Thomas Baulch (Sherwood) both of whom booted two goals. In each of the quarters last week, the Magpies managed to score at least four goals a quarter, something the Lions will have to be wary of in the Round 2 clash. If the Magpies firepower can get up and about it could be hard to stop, but the Lions have plenty of talent themselves. After all they did reach the grand final last year and are coming off smashing the reigning premiers.

It is difficult to tip a winner in this one as early days it looks like one side has great defensive structures, and the other is willing to use its firepower to best advantage. With more matches, we will get a better idea of where teams stand, but this is set to be a cracker. Last year’s runners-up will start as favourites, but Sherwood could be one of the big improvers this year.

In another must-watch match, third placed Morningside is travelling to fifth placed Wilston Grange. The Panthers enjoyed a solid 23-point victory over Labrador last week and have the tall target in Matt Hammelmann up forward and some young talents running around in Blake Coleman, Tom Griffiths and Saxon Crozier, as well as former Gippsland Power ball winner, Matthew McGannon. They deserve favouritism in the match, though new recruit from Sandgate Hawks, Tahj Abberley is one to watch for the Gorillas, as is bottom-age forward Noah McFadyen, brother of Brisbane’s Connor.

Keen to bounce back after last week’s disappointment, reigning premiers Surfers Paradise travel to Labrador to face a team that got close, but could not quite get the chocolates against Morningside. The Demons have an experienced team that is capable to getting the job done at the pointy end and will be keen to really exert themselves in this contest. Both Jack Yelland and Matthew Green impressed in Round 1, while Max Pescud is a young talent who has come through the Queensland pathways. For the Tigers, Bryce Retzlaff and Jonathon Beech provided some scoring power up forward with a combined seven goals, while former Tasmanian Devil, Blair Rubock kicked a goal and big man Fraser Thurlow were also impressive.

While Maroochydore have the bye, the final match of the round is Mt Gravatt going up against Broadbeach as both teams are searching for their first win. The Vultures went down to Sherwood in Round 1, but managed to still put 78 points on the board to be ranked the fourth highest offensively. Unfortunately they also conceded 121 to the opposition which sees their percentage at 64.46 after the opening weekend. They take on the Cats who have no form to speak of coming off the bye in Round 1, and will be chomping at the bit after what would seem like an eternity since last playing for premiership points. Despite the loss in Round 1, the Vultures had eight individual goal kickers, with Michael Doust also named among the bet while slotting two. Andrew Smith and Luke O’Sullivan also hit the scoreboard and were named among the best, hoping to build on that form again this week. The Cats have a number of inclusions into the side including former NEAFL talents, Kai Sheers, Jed Turner and Sam Cunnington – brother of North Melbourne’s Ben who was a formidable talent for Cobden down in south west Victoria. Max Lower has also joined from North Adelaide bulking up the team in terms of quality.