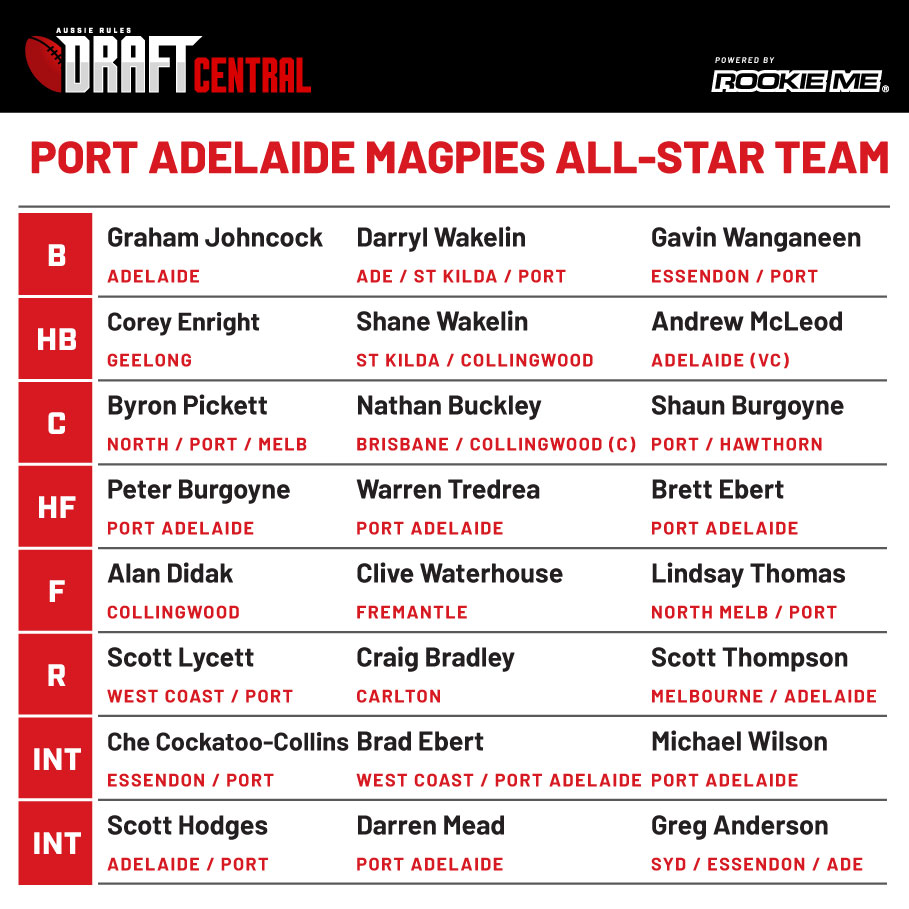 PORT Adelaide Magpies’ All-Star side is one of the most stacked we’ve compiled to date, boasting some of the AFL’s most decorated players, and a host of prodigious indigenous talent. Nathan Buckley earned the nod as the team’s captain thanks to your voting via our Instagram page, with Adelaide great Andrew McLeod second-in-charge. Please note, this side only takes into account those who featured in the modern, AFL era, and would look much different if it were to include the Magpies’ SANFL greats.

Not only is the side blessed with some of the all-time greats, but it’s also relatively well balanced. The spine is filled with genuine and strong key position players, with our skipper, Buckley at the heart of it, while a good two-way balance can be observed on the defensive lines, and some serious goalkicking power can be lies up forward. The midfielders all had no trouble finding the ball in their time, and there are some solid depth players named on the bench alongside the impact types.

The Wakelin brothers form the heart of the back six, with Shane and Darryl two of the more uncompromising key position defenders of their era. There are game-winners among the backmen too, with two-time premiership players McLeod and Gavin Wanganeen absolute locks for their spots, while fellow 300-gamer and premiership player Corey Enright slots in at half-back after his remarkably consistent career with Geelong. Rounding out the defence is Adelaide fan favourite Graham ‘Stiffy’ Johncock, who adds even more pace to the line along with versatility.

While a Burgoyne brother on either wing would have been great for the side’s footy energies, Shaun Burgoyne is joined by Port Adelaide 2004 premiership teammate, Byron Pickett on the outer. With Pickett providing the grunt and some torpedo punts from range, Burgoyne adds some silk to the mix as one of the few players to be named while still going around at the elite level. Scott Lycett is another in that category, taking up the ruck reigns amid his 93-game career.

At the heart of midfield is Buckley, a hard-nosed leader from the engine room who could rack up the ball like few others and hit the scoreboard to double his damage. He is joined by a man who lays claim to a similarly chiseled physique in Scott Thompson – of Melbourne and Adelaide fame. Durable Carlton champion Craig Bradley rounds out the midfield mix, adding class and accumulative power to go with the grunt of his proposed centre bounce partners.

There are some enigmatic characters among our forward mix, but above all, plenty of goals. Let’s start with Clive Waterhouse, the number one pick in the 1995 AFL Draft. He was a forward who proved impossible to stop at full flight, but never really capitalised on his potential as injuries soured the back-end of his career. Warren Tredrea joins him to fill out the key position posts, having led the Power to its maiden AFL premiership. His career tally of 549 goals is the highest in the squad. Take a bow, Tredders.

A couple of dangerous medium-smalls fill out the pockets, with Alan Didak and Lindsay Thomas entering the fold. Both were electric at their best and although opposition fans may have maligned them, they were brilliant goalsneaks. Peter Burgoyne joins his brother, Shaun in the side off half-forward, while a famous name in Port Adelaide’s history appears on the opposite flank in the form of Brett Ebert.

Inaugural Power best and fairest, Darren Mead is one of the best names among a solid bench, with his son Jackson also set to blaze a trail at AFL level having been drafted in 2019. The ever-reliable Michael Wilson slots in for some defensive cover, while Che Cockatoo-Collins looms as an impact player, and Brad Ebert can always play a role. Scott Hodges and Greg Anderson round out our interchange, with the likes of Levi Greenwood, and the Bond‘s – Troy and Shane unlucky to miss out. Aaron Fiora is one not to be forgotten, although that may not necessarily be the opinion of Richmond fans.