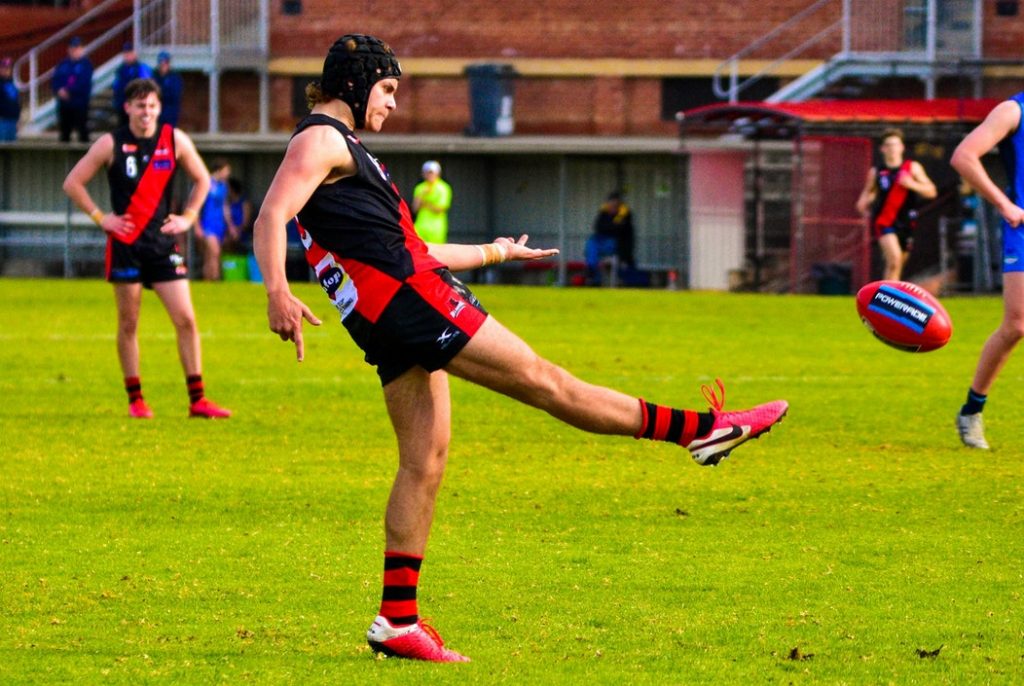 UNDER 18s action continued in the South Australian National Football League (SANFL) with Round 3 being played over the weekend, and a bunch of talented juniors stepping up to make an impact. In this edition of Caught the Eye, we highlight the key performers from each Under 18s side who stood out in the opening round of action. For extended profiles on each player, click on their names highlighted in red, and for our full scouting notes, click here.

Our scouts said: “Despite being a year-younger than the majority of players out there, Horne showed signs of his prodigious talent and looked a cut-above at times. Highlights of his game featured a series of textbook roves, a terrific contested mark in a heavily crowed pack, and three last quarter goals.” – Tom Wyman

Verdict: Last year’s SA Under 16 captain and MVP is shaping very nicely as a top five prospect among the 2021 draft cohort, continuing his awesome start to the season. There aren’t many weaknesses in his game, with sound skills on the break and up forward combining with tough ball winning attributes and the added bonus of aerial prowess. Horne can do it all and is already a leader among the Panthers’ group, making him one of the most valuable players in the competition as a bottom-ager.

Our scouts said: “The tough on-baller once again battled tirelessly in the Bulldogs’ engine room. At times he played a lone hand in the midfield as the talented South youngsters gained control. He found himself at the bottom of several packs, constantly trying to get the ball going his side’s way. – Tom Wyman

Verdict: Cowham continues to get it done as Centrals’ number one ball winner, able to extract from congestion and apply pressure on the opposition’s prime movers. The wider Bulldogs midfield group struggled against South Adelaide’s fearsome core, but Cowham can hold his head up on the back of a well rounded display. It was good to see his athleticism further come to the fore, with a couple of nice overhead marks. He has the makings to be an effective pressure forward in the state side should the opportunity present.

Our scouts said: “(O’Loughlin) was outstanding down back with his confidence and skills real features, especially with the amount of pressure put on the North Adelaide defence. Often tasked with the kick-ins, he didn’t miss many of his kicks with his long left boot.” – Ed Pascoe

Verdict: Adelaide may well have a few more Next Generation Academy (NGA) prospects to keep tabs on in 2021, with O’Loughlin asserting himself on the Under 18s competition over the weekend. He saw plenty of the ball among an under-siege defence, and was effective in his disposal – mostly via foot. He may be small in stature, but O’Loughlin has plenty of desirable traits to suit his rebounding role from defence.

Our scouts said: “(Rayson) has shown a good mix of getting back and setting up play, but also getting forward and finding targets inside 50. Rayson has a lot of tricks; he showed he could intercept with a few very courageous marks, and his trademark speed and class was on show with a blistering run and then bullet pass inside 50.” – Ed Pascoe

Verdict: Rayson is another bottom-aged academy talent to have impressed over the course of three rounds, making the half-back line and wing position his own. He may well be one of the 2003-born prospects to really have a case for State Under 18s selection, having shown a good balance between his defensive and attacking plays. While rebounding half-backs are often dime a dozen, Rayson is one with many points of difference, which should hold him in good stead.

Our scouts said: “(Saunders) continually read the ball off the hands of the ruckman, used quick hands, and laid strong tackles to impact the stoppages… He also used run-and-carry to transition the ball into attack and give the Redlegs’ forwards one-on-one opportunities.” – Tom Cheesman

Verdict: Saunders is emerging as a top-age prospect having notched a personal best at the Under 18s level of 25 disposals. His high-level endurance and ability to impact the play around the ground were impressive in his latest outing, making him one of the more impactful midfielders out there on the day. He’s one who may fly under the radar, but continually does the tough stuff.

Our scouts said: “Poulter was a shining light for the Eagles in their loss… he was incredibly dangerous when playing up forward, creating havoc both in the air and on the ground. Poulter’s marking ability was on show on Saturday, as he was rarely out-marked and was frequently a go-to option for his side coming out of defence.” – Tom Cheesman

Verdict: The Eagles standout is firming as a true draft bolter, and continues to be nothing short of dominant at Under 18 level. The big-bodied midfielder/forward has terrific presence and is so difficult to stop at full flight; able to do it all with slick evasion, strength, tackling pressure, ball winning ability, aerial prowess, a penetrating kick, and scoreboard impact. He will surely soon be due for a senior call-up, but is so integral to WWT’s junior side.

Verdict: One of two Bloods forwards to have booted three goals on the weekend, there is just something about the opportunistic small forward. Donning a helmet, Sgroi was hard to miss when near the ball, and he ensured the opposition knew of his presence with great tackling pressure to go with sharp conversion. He is the kind of player that only needs a few touches to have an impact, and he did so on the weekend. May be a bottom-ager to keep an eye on after his Under 18s debut.

Our scouts said: “The balanced midfielder is one of the finest exponents of the handball in this year’s crop, and would have run very close to 100 per cent efficiency in that area… But what was perhaps most pleasing about Powell’s game on Saturday was the added dimensions to his craft; showcasing his improved work on the spread, and aptitude in running with the ball, and a higher output by foot.” – Michael Alvaro

Verdict: Powell has far and away been the most prolific midfielder in the competition thus far, with his innate ability to find the ball helping Sturt dominate the midfield battle. He proved much more than a consistent accumulator on the weekend too, gaining the confidence to provide a bit of dash and break away from the contest, balancing out his usual handball-happy tendencies. If he can continue to become more damaging and impact in different ways, then Powell will be one of the more complete midfield packages of his draft class.