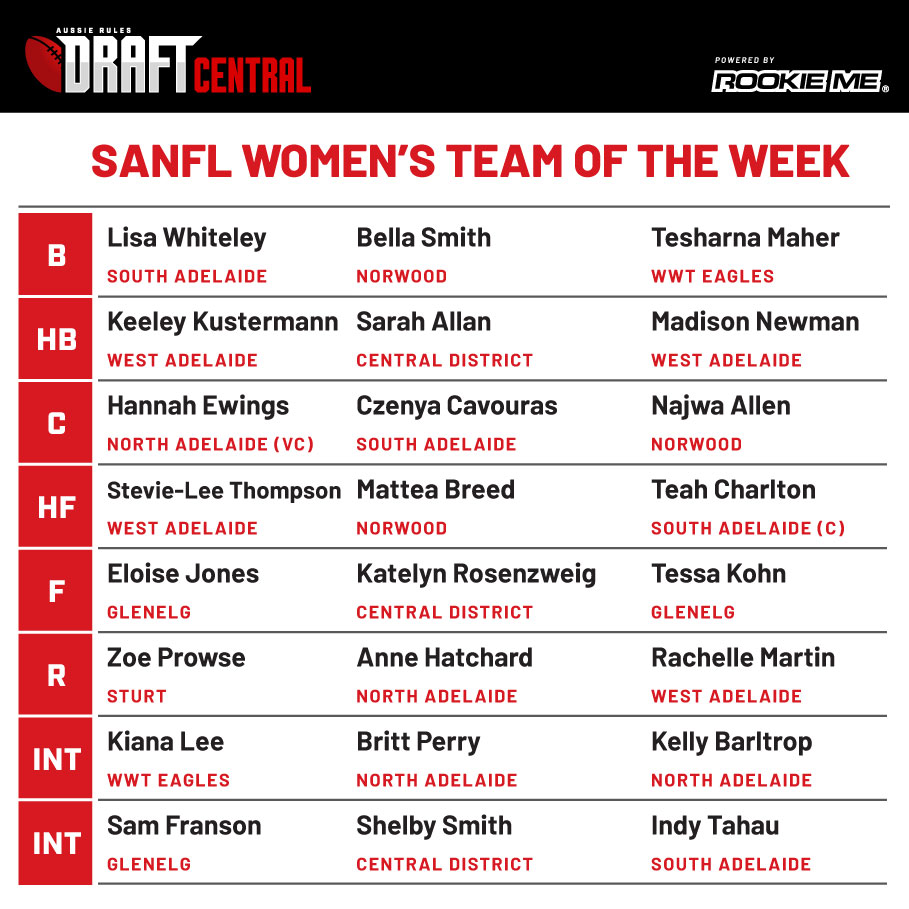 SOUTH Australia National Football League (SANFL) Women’s Round 7 played out over the weekend and the top three teams have again provided plenty of players in our Team of the Week. North Adelaide, South Adelaide and West Adelaide all had four players in the team for Round 7, while Glenelg, Central District and Norwood had the three. The remaining three players were from Woodville-West Torrens (two) and Sturt (one).

North Adelaide’s quartet in their huge win over Norwood starts in the midfield where Crows ball winner Anne Hatchard makes it for a third consecutive week, joined in the middle by young teammate, Hannah Ewings. The middle-ager had one of her most impressive performances to date over the weekend and earned the nod for vice-captaincy this week. Also in the side are Britt Perry and Kelly Barltrop who both slot onto the bench on account for the fact the forward six was so strong this week.

Reigning premiers South Adelaide had a mix across the field, led by young gun Teah Charlton who earned the nod as captain thanks to being the top performing player across the round. She is joined in the side by defender Lisa Whiteley, midfielder Czenya Cavouras, and fellow AFL Women’s National Academy member and ruck, Indy Tahau.

West Adelaide still had four players make the final 24 this week despite the loss, with regular defenders Keeley Kustermann and Madison Newman slotting in at half-back once again. Up forward, Stevie-Lee Thompson makes it in after narrowly missing the last couple of weeks, while Rachelle Martin has become a regular in our Team of the Week through the midfield.

The other big winner of the weekend was Glenelg, with the Tigers having the three players making the final squad. It was incredibly difficult to pick the successful Bays because the team effort was so even across the board. In the end, Eloise Jones made the side again up forward alongside another young talent in Tessa Kohn, while Sam Franson made the interchange for her efforts.

Central’s District’s first win since Round 1 also yielded three players in the Team of the Week this round, with Sarah Allan once again making it. Though she played through the ruck, there was a greater need for key defenders in the side so she will slot back at centre half-back in this scenario. Up the other end of the ground, Katelyn Rosenzweig made it for another week after three goals and great defensive pressure, while Shelby Smith did well across four quarters to make the side. Both Chantel Reynolds and Caitlen Teague were close to making the side this week.

The last side that had three players in for the round was Norwood, with a trio of talents who really stood tall in defeat. Up either end is Bella Smith and Mattea Breed, with the former Central Allies’ AFL Women’s Under 18 Championships representatives making the side at full-back and centre half-forward. While Smith played more off half-back and Breed through the middle, both are capable of holding down those roles and find a place in the team there. The final representative was Najwa Allen who made her way onto a wing after a standout game against the odds.

The final three players in the team to round out the squad were Woodville-West Torrens’ Tesharna Maher in the back pocket, Sturt’s Zoe Prowse in the ruck, and Maher’s teammate Kiana Lee on the bench. A couple of Sturt talents in Elsie Dawes and Georgia Bevan also came close to making it and were named among the emergencies.

DRAFT CENTRAL SANFL WOMEN’S ROUND 7 TEAM OF THE WEEK: