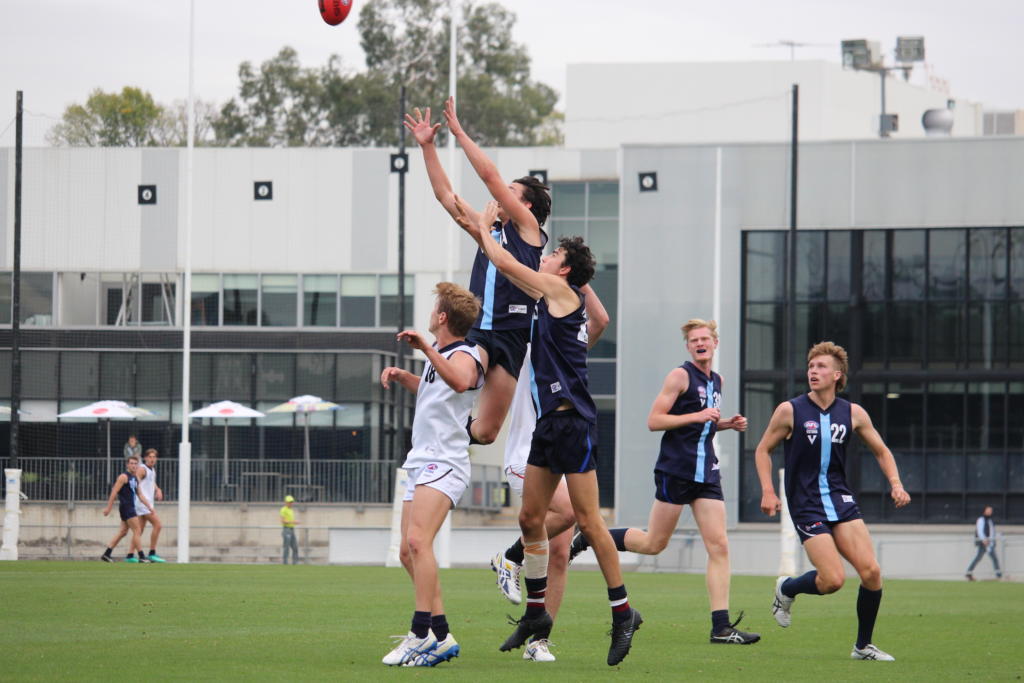 Next under the microscope in our AFL Draft watch is Western Jets’ Eddie Ford, a dynamic medium forward who had eyes on impacting through midfield in his top-age year. The leading Jets draft prospect has x-factor in spades; able to fly for highlight reel marks, boot long goals, and burst through traffic with rare speed and agility. Ford was a mainstay in Western’s NAB League lineup last year, running out for 16 games and providing a bit of spark in each. Consistency will be key for the medium-sized prospect, who battled a knee injury during preseason and will look to produce spurts like he did in last year’s Under 17 Futures All Star showcase, more often.

Started the game with a bang, picking up eight touches and booting two goals in an eye-opening first term. He had his hands on it early leading outside 50, then kicking a great running goal on the right from 40m out. His second goal came when Ford read the tap perfectly, pushed off his opponent in Errol Gulden and chucked it on his boot for it to sail through. It showed his high-level footy IQ and goal sense all in one play. He was still very busy throughout the game with some nice touches, though his first term was his standout. Had a shot from 45m on the run in the third term but it sprayed to the left. His best is very good.

NAB League Wildcard Round vs. GWV

Ford won plenty of the ball playing as a leading option at half-forward. His ability to find the ball and provide an option was pivotal for the Jets, and despite a few errors and missed shots on goal, he should take confidence in his game. Ford missed a few marks early in the game which wasn’t like him, but he would take two very strong marks in the last term. Ford finished the game with 23 disposals and three behinds in what could have been a huge game if he kicked straight.

NAB League Round 16 vs. Oakleigh

The bottom-age forward reads the play well and times his marks, almost providing another massive highlight as he had at the Victorian trials at Ikon Park, but could not quite bring it down. He wanted to keep the ball moving at every opportunity, playing on and getting it deep into attack. Ford set up a goal to Billy Cootee with a quick handball out of congestion to his teammate free in space for a great goal. He had a chance himself earlier in the game but was dragged down and his shot went to the right.

NAB League Round 12 vs. Calder

Ford was the most dangerous forward for the Jets, proving a good option as a marking target and a player capable of creating something at ground level. Ford would only kick the one goal but how he kicked it was impressive – he lead up at the ball to take a mark and would win a free kick in that contest but he was quick to gather the loose ball and run to the 50 metre arc and slot a lovely running goal. Ford showed great aggression and agility throughout the game and finished with 21 disposals and the one goal.

NAB League Round 5 vs. Tasmania

Ford seldom fails to catch the eye with his strong overhead marking, stylish use of the ball, and explosiveness. While he was quiet early on, Ford came into the game well after half time and had a purple patch in the third term where he kicked two goals. The first was a set shot conversion from 45 metres on the back of a strong one-on-one mark, and the second was a clever snap from the boundary, while he missed another chance in the final quarter on the run.