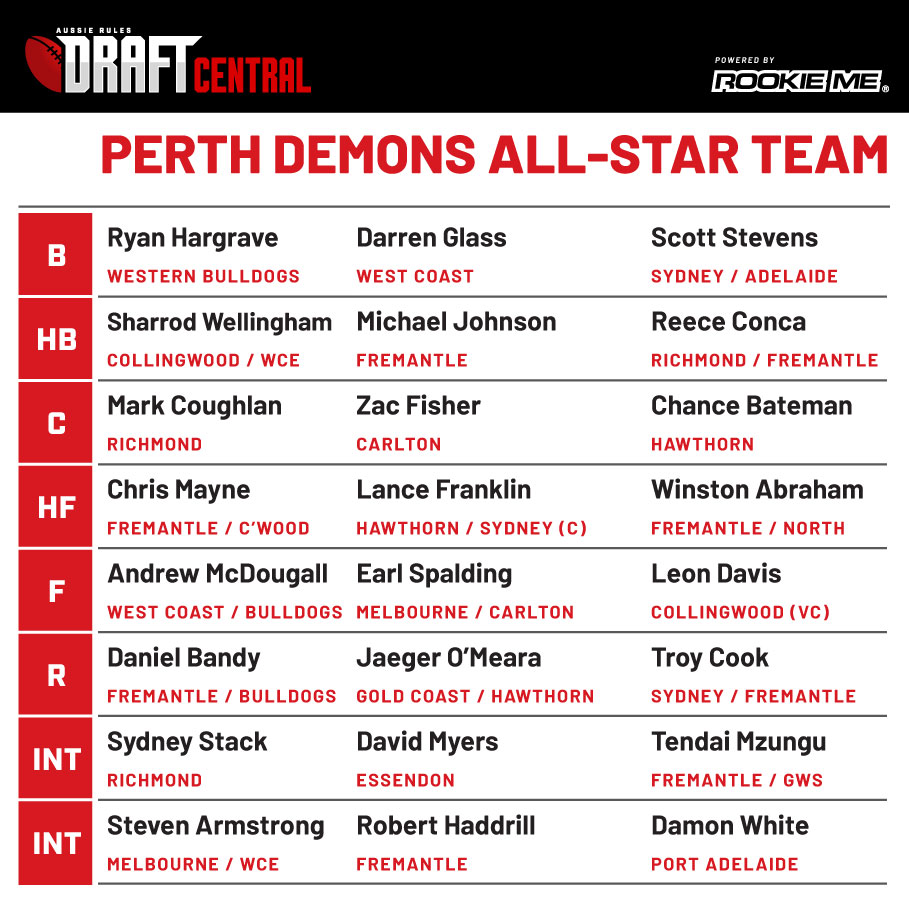 PERTH Demons’ All-Star team has some serious quality key position players, as well as some electric smalls around the ground. One of the greatest ever key forwards in Lance Franklin earned the nod as the team’s captain thanks to your voting via our Instagram page.

The team itself is solid without being outstanding, though there are quite a few underrated players in the side. The top-end elite talent is very strong, particularly in the key position areas, whilst a number of players can slot into multiple positions. The depth drops off towards the end, but there are some up-and-coming players who might have a say in the next few years to squeeze into the team.

The back six is highlighted by a couple of All-Australian talls in Darren Glass and Michael Johnson. Playing for opposite West Australian sides, Glass was one of the best full-backs of the modern era with four All-Australian nods and three best and fairests. He is paired up with Johnson who earned one All-Australian selection in his 244 games for the Dockers. A couple of talls who could also play against bigger opponents are Western Bulldogs’ Ryan Hargrave, and utility Scott Stevens who fill out the back pockets.

At half-back, a couple of midfielder-defenders slot in, with Tiger-turned-Docker Reece Conca and recently retired Pie-turned-Eagle Sharrod Wellingham rounding out the defensive end. Both provide plenty of speed and have some serious talent through there. Off the bench, Robbert Haddrill and Tendai Mzungu could play roles if required there.

The middle has some serious future talent in its onball group with Zac Fisher and Jaeger O’Meara likely to end their careers in the top five of Perth’s All-Time players at AFL level. Fisher has only played the 55 games but looks a natural at the level, while O’Meara has won a Rising Star and now he has overcome early injuries, is set to play his 100th game this year and be a star in Hawthorn’s midfield. They are joined by honest Fremantle midfielder Troy Cook, who won a best and fairest for the Dockers and played just shy of 200 games.

On the wings, a couple of tough players in their hey day, Richmond’s Mark Coughlan and Hawthorn’s Chance Bateman provide some extra depth across the ground. The midfield is quite deep, and the likes of David Myers and Steven Armstrong off the bench, and then Chris Mayne from half-forward gives it some flexibility when looking at the magnets. Sydney Stack might only have one season worth of experience, but he is another who could slot in through the forward half of the ground. Daniel Bandy might be a little undersized to play as the number one ruck, but he can also go forward and provide another target.

The front six is the most dangerous led by Franklin at centre half-forward. His career includes a whopping eight All-Australians, four Coleman Medals, one best and fairest, two premierships and a further three All-Australian 40-player squad nominations. A player who retired long before Franklin graced the field takes the other key position spot, with 200-game forward Earl Spalding booting 169 snags in 211 games.

The excitement machines in Collingwood utility, Leon Davis – a two-time All-Australian playing off half-back but was best known for his miraculous goals – is in a pocket along with high-flyer Winston Abraham best known for his mark at Manuka in 1999. Andrew McDougall is a third tall option in the other pocket, booting 50 goals in a short 43-game stint, while Mayne is at half-forward but could float into the midfield. Damon White is another key option who can influence off the bench.

The only 50-gamer to miss out on the side was Dion Woods (59 games), while Cruise Garlett (32), Brennan Stack (21) and Brad Fox (21) were the others to reach at least 20 games. Of the current players, Quinton Narkle (12 games prior to the season) and Ian Hill (eight) are among those talented ones expected to make the jump in the coming years.