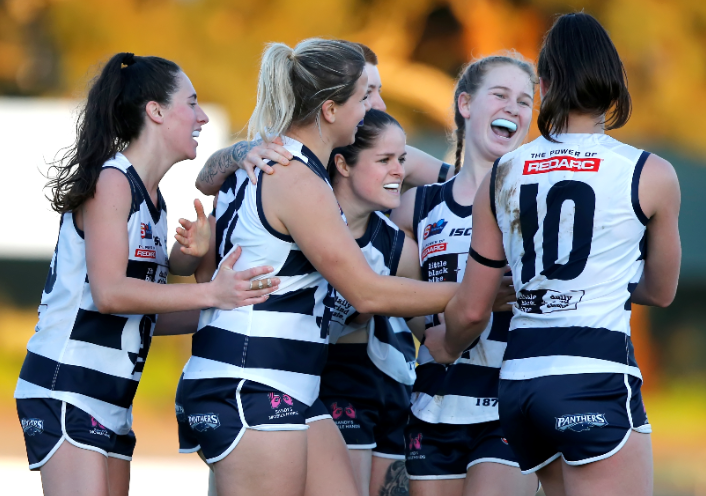 ROUND 7 of the South Australian National Football League (SANFL) Women’s competition is almost like a finals series, with 1st against 4th, 2nd against 3rd, and then the bottom four teams facing off in a round that is sure to determine a lot of things in the run home to the finals series. All four games are being played tomorrow in a Super Saturday.

The opening game of the round is set to be the best of the lot with a battle of second up against third and two genuine title contenders going at it. The team with the most firepower up forward (West Adelaide) going up against the team that has the most balanced group of the past couple of seasons (South Adelaide) makes for essential viewing. The back-to-back reigning premiers will be hard to beat, but at home the Westies will push the Panthers all the way.

Which midfield will win the battle?

The answer to this question may well determine the match. Both midfields are loaded with talent, as the likes of Rachelle Martin, Abbie Ballard and Zoe Greer go up against Nicole Campbell, Hannah Munyard and a returning Czenya Cavouras.

The Bloods have a highly effective system where the defenders hold a high line, constantly pushing teams back so when a quick kick comes out of the forward 50, there is a defender there ready to mark and send it back in. Madison Newman is particularly strong in this area, and with Newman and Keeley Kustermann both superb kicks off half-back, they are players that are so damaging for the game.

How will South Adelaide handle the toughest forward line?

South is renowned for its sturdy defence that meets every challenge thrown at it. This week it will be the biggest of the lot, with damaging talls in Melanie Elsegood and Chelsea Biddell, and the always dangerous Stevie-Lee Thompson. If the likes of Lauren Buchanan who returns back into the side this week, Jaslynne Smith and Samantha Pratt can contain them, then this will be a tight tussle.

Prediction: Too tight to call. South deserve favouritism and it is hard to tip against them. Every time you do, they find a way to win. But there is something about West Adelaide at the moment that screams they are ready to take the next step, so do not be surprised if the Westies get up in this one.

In a battle of the sides that realistically could fight for a finals spot but are just not quite close enough, the youth of Sturt take on the experience of Glenelg. The Bays have been unlucky since loading up on AFL Women’s talent, pushing both North Adelaide and South Adelaide in the past fortnight. It is expected they will be keen to start strongly against a Sturt side that has plenty of bright future stars, and a strong defence, but have struggled to score.

Can Sturt kick a winning score?

No doubt Sturt’s defence is unbelievable. The likes of Hannah Prenzler, Jo-Anna Baltais and Alysha Healy all offer a different defensive aspect. This week Prenzler has been named at half-forward which could be the key to answering the question. Everyone knows Glenelg has the ability to kick a big score, but it will likely need to be a tight, low-scoring contest for Sturt to do the same.

Who will win the midfield battle?

Both these sides have very capable midfields with Sturt’s containing co-captain’s Maya Rigter and Georgia Bevan, as well as Isobel Kuipers, whilst the Tigers are led by Ebony Marinoff and Eloise Jones, and Ellie Kellock has been in some terrific form of late.

How much will AFLW experience count?

The Bays’ AFLW experience will be important up against an inexperienced side. Sturt will never stop throwing everything at its opposition, but Glenelg has enough firepower that it will continue to attack. Glenelg has had patches where the top two teams got on top and kicked multiple goals, so the Tigers will keen to not let that happen here.

Prediction: Glenelg’s experience should see them home here, but Sturt will make life difficult for them so expect a low-scoring battle.

Both Woodville-West Torrens and Central District have shown they are much more competitive in year two compared to their inaugural year last year, which is great for the competition as a while. Central grabbed an early win in Round 1, whilst the Eagles snaffled one back in Round 4 just before the season was suspended. This match could be an interesting one because one team is more than capable of moving the ball well, it is just about finding the right targets going forward, whilst the other is a fierce defensive side that wears down its opposition.

Where can Central take the advantage?

The Bulldogs’ spine is stronger with genuine talls at either end in the form of Sarah Allan and Katelyn Rosenzweig, with the former spending the majority of her time through the ruck last week too. Central is a side that opposition teams have to play well against to beat, because the Bulldogs are not going to just let you win. The Bulldogs have found a way to share the scoring load since the break, so now have multiple threats up there, such as Shannon Murphy who kicked two majors.

Where can Eagles take the advantage?

Woodville-West Torrens’ tackling is the best in the business. They make sure the opposition is feeling it throughout games and earn every touch. If their tackles stick, it will go a long way to winning because they can shut down the Bulldogs running game. Central’s style looks good when it moves, but it is often that last kick inside 50 that can sometimes miss and the Bulldogs will know the Eagles will bring the heat. Jess Sedunary has been a massive inclusion fo the Eagles, and Jovanka Zecevic and Amie Blanden – funnily enough the Eagles’ half-forward line this week – have been amongst their most consistent players.

What are some of the key match ups?

A potential young guns match up that could be huge to see if they ended up going head-to-head would be Latiah Huynh (Central) up against Charlotte Dolan (Eagles). Both are not afraid to move the ball, both are courageous and both are fierce at the contest when needing to be. Along with that, a vital match up at opposite ends would be Demi Sonneman up against Kiana Lee, and Ashlee Reid potentially trying to quell Katelyn Rosenzweig. There are no shortage of big one-on-ones here.

Prediction: Another one too close to call. Really like the way both sides have taken it up to the opposition the last few weeks, but Central in particular with the style were great against South and it might hold up here for the Bulldogs’ second win.

A massive clash that will have huge ramifications on the run to the finals is up next with the other top four head-to-head between North Adelaide and Norwood. The Roosters are yet to lose this season, keen to avenge their grand final loss in 2019, while the minor premiers from last season have had to undergo some rebuilding with a lot of players being drafted – including their coach – into the AFL Women’s. A number of them have returned and Norwood have been able to string a couple of wins together since the break, but this is a huge test here. If they win, they draw level with West Adelaide, while North run the risk of South catching them at the top. It also means there would be up to a five-point gap between the top four and bottom four, all but guaranteeing the finals teams.

Does North Adelaide have an Achilles heel?

With six wins on the trot and answering every challenge thrown at them, it is hard to point out a weakness in the side. The defence is sturdy and reliable, the midfield is elite, the forward line has a nice mix of talls and smalls, and the depth is very impressive. However like any side, the key is winning the ball out of the midfield, because if they do not do that, it is hard to pile on the high scores that they do. It is imperative that Norwood win the midfield battle if they are to go on their way to claim victory. North Adelaide have not lost for a reason.

How much will the ruck battle play a role?

Leah Cutting is clearly one of, if not the standout ruck in the competition from a state league perspective, whilst Bek Rasheed has come in this season but shown some promising signs for the Redlegs. Most will expect Cutting to win that battle – and she will need to in order to give her midfielders a chance – but if Rasheed can nullify or get on top, then North is already a step ahead. Given North’s midfield of Anne Hatchard, Leah Tynan and Ashleigh Woodland with Katelyn Pope providing the dash off the wing, it will be a difficult one to stop.

How does Norwood kick a winning score against North?

The Roosters lowest score this year is 4.1 (25) and Glenelg’s identical score last week was the highest score against the Roosters. South pushed them all the way in Round 4, and the Redlegs are the only team yet to face them. Norwood on the other hand have score more than four goals once – in the win against Central in Round 5 – so you have to think they will need to do it again to win here. They have the potential through the likes of Alison Ferrall and Mattea Breed who both booted three goals in that aforementioned victory, whilst the midfield of Najwa Allen, Monique Hollick and Jess Macolino can all get forward and contribute. Norwood often has a rolling forward line with a lot of midfielders rotating through there which can also be a huge help. Unfortunately for the Redlegs, North’s defence is the best in the competition with Kristi Harvey and Amber Ward superb rebounders, and now Talia Radan back there too.

Prediction: It is just too hard to look past North. Norwood will give it a real shake and have the talent to do it, but the Roosters just keep getting it done each and every week and it is hard to see them getting beaten.