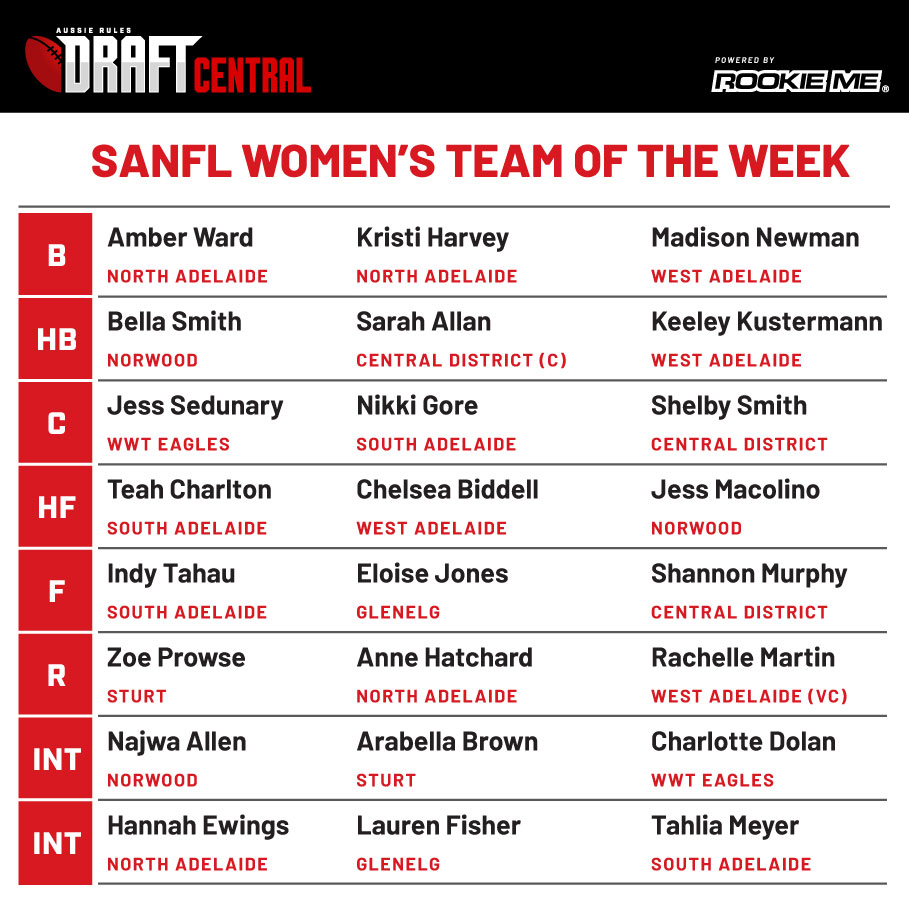 THREE teams have recorded a league-high four players in our Draft Central South Australian National Football League (SANFL) Team of the Week for Round 6; the top three teams – North Adelaide, South Adelaide and West Adelaide. Other Round 6 winner Norwood, and narrow loser, Central District both had three, while other Round 6 losers, Sturt, Glenelg and Woodville-West Torrens Eagles also had two nominees in the 24-player squad.

North Adelaide had a battle for the most part with Glenelg before kicking away late in the third term when challenged. Two of their four players came in up the defensive end with both Kristi Harvey and Amber Ward making the starting team, as did Anne Hatchard once again, while Hannah Ewings made her way onto the bench for some eye-catching moments. The Tigers had two players make the side with Eloise Jones up forward and Lauren Fisher as a hard working defender earning spots in the 24-player squad.

South Adelaide and Central District had the most representatives in the team from a game on the weekend with a total of seven making the team. From the Panthers, Nikki Gore and Tahlia Meyer both earned a spot in the side, while the combination of young guns and AFL Women’s National Academy members, Teah Charlton and Indy Tahau saw them squeeze into the front six. The Bulldogs had a trio of their own with Adelaide talent Sarah Allan named captain of this week’s team and slotting into centre half-back for her work around the ground including the ruck and in defence. Joining her were Shelby Smith and Shannon Murphy in midfield and up forward respectively after impressive performances.

The other side to earn four nominations in the Team of the Week was West Adelaide with three of the four returning after making it in last week. Defenders, Madison Newman and Keeley Kustermann make the back six again, while Rachelle Martin slots into the midfield and was named vice-captain in the team. Up forward, Chelsea Biddell takes a key position role at centre half-forward as the fourth member of the side. Their opponents Sturt had two players in the team, with AFL Women’s National Academy member Zoe Prowse starring through the ruck, and Arabella Brown impressing between midfield and forward.

The final game of the round between Norwood and Woodville-West Torrens had five total members in the side, with the Redlegs contributing three. Jess Macolino makes her debut in the side, joining Bella Smith in defence – who should have been centre half-back had it not been for the starring efforts of Allan – and Najwa Allen on the bench. The Eagles’ two representatives this week were Jess Sedunary who made a welcome return to the side winning the ball all over the ground, while young defender Charlotte Dolan stood out running the ball from the back 50 and makes her way onto the bench.

Among those who came into consideration and would make up the emergencies were Glenelg midfielder Ellie Kellock, Central key forward Katelyn Rosenzweig, and Eagles’ mid-forward Amie Bladen.

DRAFT CENTRAL SANFL WOMEN’S TEAM OF THE WEEK: ROUND 6