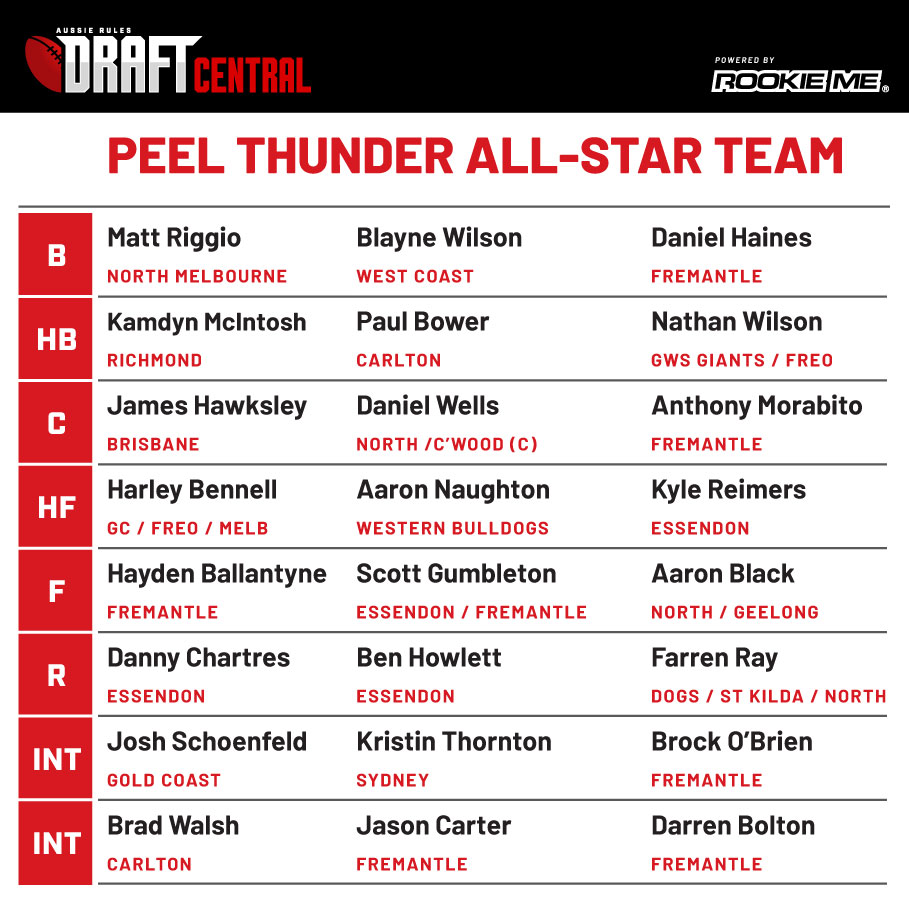 THERE is no denying that Peel Thunder’s All-Star Team of the AFL Draft era is one that lacks a fair bit of punch compared to other sides. That is not to say there is some class and grunt in there, but with only 23 players who have been drafted and gone onto play at the elite level, each player has been handed a spot in the team. It also marked the first time a player who did not play an senior AFL match made an All-Star squad.

There is no shortage of high picks in the team, but a number of players have ultimately had careers cut short through no fault of their own, and rather it be injury that ended their AFL journey’s prematurely. However there is plenty of speed and class, as well as some strong marking options across the ground, and even some tagging options who could negate opposition midfields.

The back six is anchored by key defenders, Paul Bower and Blayne Wilson. Bower played 70 games for Carlton and was a reliable defender during that time, while Wilson managed nine games in his time with West Coast. Also in the back pockets are Matt Riggio and Daniel Haines, combining for 26 games for North Melbourne and Fremantle respectively.

Half-back is among the strongest area on the ground with Tiger, Kamdyn McIntosh and GIANT-turned-Docker Nathan Wilson providing plenty of run there. Wilson is the fifth highest games holder coming out of the Thunder, with 116 matches prior to season 2020. McIntosh has played 90 games in his time in the yellow and black.

Peel’s clear standout player is Daniel Wells, with the Kangaroo and Pie captaining the side after winning the All-Star voting on Instagram today. He played 258 games – a Peel Thunder record at AFL level – and won two best and fairests and two All-Australian 40-player nominations. Had his career not had its injury issues, he may well have played more than 300 games with more accolades.

Also in midfield are the second and fourth most games played coming out of Peel Thunder, with 209-game Dog, Saint and Roo, Farren Ray, as well as Essendon 124-gamer Ben Howlett. They shape the onball brigade with James Hawksley (32 games) and Anthony Morabito (26) on the wings, the latter of whom was another elite player who just had too many anterior cruciate ligament (ACL) injuries to make a proper go of it. The ruck is Essendon’s Danny Chartres who did not play a game for the Bombers, but was the tallest player remaining – 194cm – outside the 23 who did play a game at the elite level. Chartres did spend time in the ruck for Bendigo Bombers the year after he was drafted.

In the front six, one of the most promising AFL talents in Western Bulldogs’ Aaron Naughton is at centre half-forward. He has played 41 games and booted 34 goals prior to season 2020, but is one who could end up as one of Peel’s best ever players. Lining up in another key position spot in Scott Gumbleton, another unlucky high pick who succumbed to multiple injuries over his time, playing 35 games and booting 45 goals.

The other four inside 50 are players with both marking and crumbing abilities, led by Harley Bennell (83 games, 95 goals) who is yet another high pick that has had injuries stunting his development at the elite level, but is one of the most talented players going around. Hayden Ballantyne played 171 games and booted 254 goals to be a one-time All-Australian, and the only Peel Thunder player with a league-recognised accolade. Aaron Black and Kyle Reimers round out of the forward 50, combining for 117 games and both booting 69 goals.

In this case, the depth are those not named on the field. Josh Schoenfeld has played the most games of those on the bench, managing the 15 games for Gold Coast. Kristin Thornton (eight), Brock O’Brien (three), Brad Walsh (three), Jason Carter (two) and Darren Bolton (two) round out the bench. Of those players, only Carter is still on a list and could make his way onto the starting field with a strong season.

Aside from Carter, Wilson, McIntosh, Bennell and Naughton who are the current players on AFL lists, Durak Tucker and Jarvis Pina were both drafted over the past two seasons, with Rucker picked up by Sydney and Pina recruited by Fremantle.