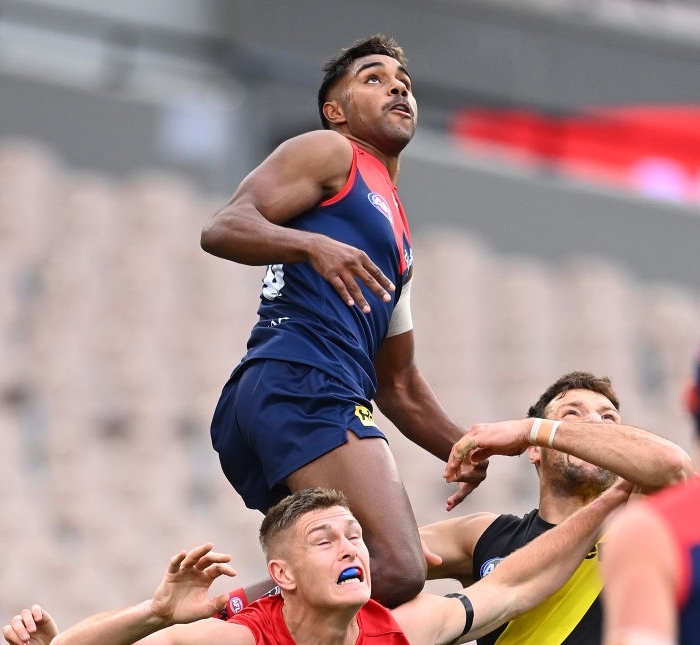 11 RECRUITS from the 2019 AFL National Draft ran out for their respective teams on the weekend, and we take a look at how the best handful of them performed. Top pick Matt Rowell may have been rubbed out early with a dislocated shoulder, but there was plenty to take out of Round 5 for the class of 2019 as plenty of talented youngsters retained their spots at the elite level. For the first time this year, none of the weekend’s debutants came from the most recent draft, but there promises to be plenty to come.

STAR OF THE ROUND: Hayden Young (Fremantle)

The stats may not overly flatter him, but Young is building nicely into is AFL career having returned another strong performance in Fremantle’s first win for 2020. Stationed in his usual defensive post, Young delivered 12 of his 15 disposals from the back half and did so with accuracy. His intercept marking ability is also coming to the fore as he gains in confidence, able to read the ball well in flight and have a crack backing into traffic. At four games into his elite level venture, the Dandenong Stingrays graduate is beginning to bring his best traits forward and has cemented his spot in the Dockers’ side.

As good mate, Rowell went down, Anderson stepped up to deliver one of his better performances across his first five career games. Continuing in his role on the wing, Anderson got involved in the contest and managed to find the ball in important areas while also fulfilling his defensive duties with 11 pressure acts. The former Oakleigh Charger may have turned the ball over six times amid the heat of the contest, but has impactful touches and has the potential to have a big say once all the factors in his game click.

Ash is another who is beginning to click into gear having been granted ample opportunity upon his AFL berth, and he was among the GIANTS’ top 10 disposal winners in their win against Hawthorn on Sunday. Moving along the line from defence to the wing, Ash was able to penetrate the forward 50 in transition to show a glimpse of his attacking quality, while also providing a safe outlet in the back half. He won half of his possessions in contested situations too, displaying a good appetite for the contest and the rigours of the elite level.

Right behind Ash in terms of disposals was GIANTS Academy graduate, Green with 14. After a breakout game in Round 4 saw him earn a Rising Star nomination, the big-bodied midfielder continued on his ball winning ways to contribute some solid numbers to GWS’ Sunday salute. The GIANTS’ coaching staff has shown great faith in Green in allowing him to run through midfield, attending centre bounces where he thrives on the contested side of the game. He’s another who looks to be locking down a spot, and is providing ample cover some some absent GWS stars.

Following the example set by former Vic Country teammate, Young is Serong, who also played his part in Fremantle’s opening win for season 2020. The diminutive Gippsland Power product is another who has been thrust right into the engine room action at times, holding his own against big-bodied opposition and remaining relevant going both ways. He is proving more comfortable with ball in hand as time goes on, and it is positive that he manages to find it in the first place.