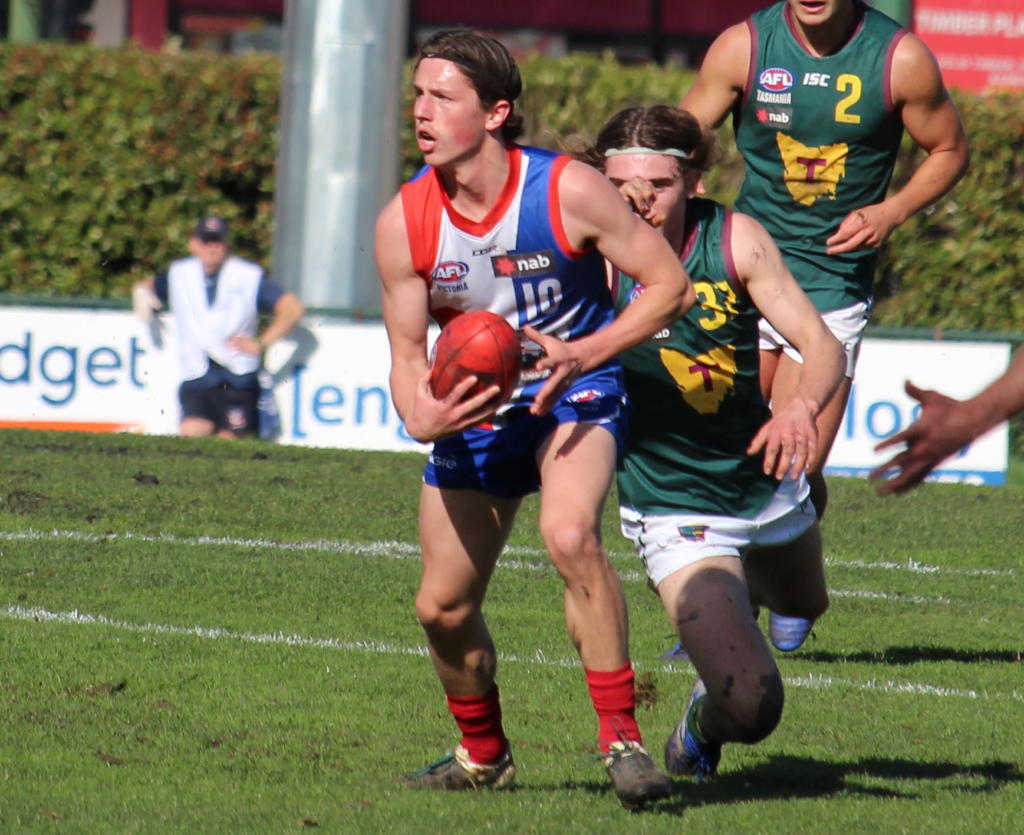 A SATURDAY double-header at Box Hill City Oval held massive finals ramifications in last year’s NAB League competition, kicking off Round 14 in style. Gippsland Power had Oakleigh to thank as the Chargers knocked off ladder leader, Eastern, seeing the two sides close within a game of top spot. Elsewhere, Sandringham kept pace with the leading pack after a thrilling win over Dandenong, while Northern and Calder got the better of their Country opponents, and Greater Western Victoria (GWV) knocked off Geelong. Western Jets enjoyed the bye.

Gippsland and the Tasmania Devils were first to take the field for the weekend, doing battle on neutral territory on Saturday morning. Having fallen just behind at the first break and jolted two goals ahead heading into the last, the second-placed Power found a spark when it mattered to leave Tasmania in their wake. A six-goal final term saw the Victorians coast to a 51-point victory, not indicative of the overall contest, but a sign of their irresistible form in full flight.

Twin talls Josh Smith and Charlie Comben contributed three goals each to the win, with skipper Brock Smith also booting a rare couple of majors from defence to go with 26 touches. Sam Flanders was the leading disposal getter on the day with 28, while fellow draftee Leo Connolly managed 23. Rhyan Mansell and Oliver Davis found the most ball for Tasmania en route to 18 disposals apiece, as the likes of Matt McGuinness (16 disposals, one goal) and Sam Collins (15, one) also fared well.

In the day’s later game, Oakleigh pegged back Eastern’s first quarter jump to get over the line by eight points in what would prove a Grand Final preview. The Chargers took toll in the two terms they held a wind advantage, booting 10 of their 12 goals in the second and fourth quarters to secure a massive result. While they regained the lead with under 20 minutes to play, the Ranges simply could not stop Oakleigh’s onslaught.

A forward from either side put four goals on the board, with Oakleigh 19-year-old Cooper Sharman, and Eastern’s Jordan Jaworski playing their parts. Port draftee Dylan Williams again proved a hero up forward with two important goals from eight touches in his final game for the year, with his co-captain Trent Bianco (34 disposals) the leading ball winner. Cricketing ace Wil Parker was Eastern’s best with 26 touches, while Oakleigh bottom-agers Lochlan Jenkins and Will Phillips also found plenty of the ball with 22 disposals each.

Fast forward to Sunday morning, and Sandringham was made to work for a seven-point win over Dandenong on home turf. After setting up an early lead and holding the ascendancy for the entire match, it seemed the Dragons would coast home to victory at 29 points to the good come the final break. But the Stingrays would not take the loss lying down, piling on five goals in the final 10 minutes to give the scoreless Sandringham an almighty scare.

Future Adelaide top 10 pick Fischer McAsey proved his swingman value in returning a three-goal effort, also dominating the airways with 10 marks. Ashton Williamson booted three majors for Dandenong, as Hayden Young managed two from his team-high 25 disposals. Angus Hanrahan led all comers with 35 disposals and a goal, while the likes of Ryan Byrnes (22 disposals) and Sam De Koning (16) stood strong against good opposition on either side.

Calder’s Bendigo road trip proved a fruitful one, as the Cannons raided the Pioneers’ territory to snatch all four premiership points. Bendigo held a slight advantage early, but could not quite do enough to match Calder’s constant scoreboard pressure. A four-goal to one second term in favour of Calder proved the defining period of play, with Bendigo matching their opponent otherwise in the 20-point defeat.

Diminutive Calder forward Jake Sutton booted a game-high three goals, while teammate and leading ball winner Harrison Minton-Connell notched two from his 34 touches in a day out, and Essendon draftee Harrison Jones also found the goals twice. Bottom-ager Jack Ginnivan repeated the feat for Bendigo alongside Will Wallace, while Ben Worme and Noah Walsh also hit the scoreboard from their team-high 20 disposals each. Carlton draftee Sam Ramsay (28 disposals, one goal) continued his hot form, and Sydney recruit Brady Rowles was kept to 12 touches.

Another Metro team to make the most of its road trip was Northern, who travelled to Shepparton to take on Murray. All of the damage was done in a 10-goal to three opening half from the Knights, as the home side struggled to claw its way back into the contest. The final margin sat at 27 points having gotten out to 44 in the third term, as Northern picked up its seventh victory.

A massive outing from small forward Josh D’Intinosante saw him bag six majors from 18 disposals in a sharp display inside forward 50, with leading target Liam McMahon booting three of his own. Skipper Justin Davies saw the most ball for Northern with 26 disposals alongside Sunny Brazier, with Carlton draftee Sam Philp managing 25. Murray’s co-captains stood up too, with Dylan Clarke (28 disposals) leading all comers, while number four pick Lachlan Ash kicked two goals from his 24. 16-year-old Josh Rachele also showcased his talent with two majors.

The GWV Rebels ensured they would continue the trend of away sides picking up wins, as they comfortably accounted for Geelong to the tune of 35 points. Like many of the Round 14 winners, GWV got off to an ideal start at Kardinia Park on the back of four goals to nil in the opening term. An inaccurate Falcons outfit spurned chances to get back into the match with 2.7 in the third term, as GWV kicked away with another four majors in the last to cruise to victory.

Collingwood slider Jay Rantall was among a quartet of Rebels to claim multiple goals, booting two alongside Glenelg recruit Mitch Martin, while Nick Caris managed a game-high four. 19-year-old Charlie Sprague added another three majors to his season tally for Geelong, while bottom-ager Noah Gribble had 28 disposals to lead all comers, and skipper Jesse Clark managed 25 in the losing effort.