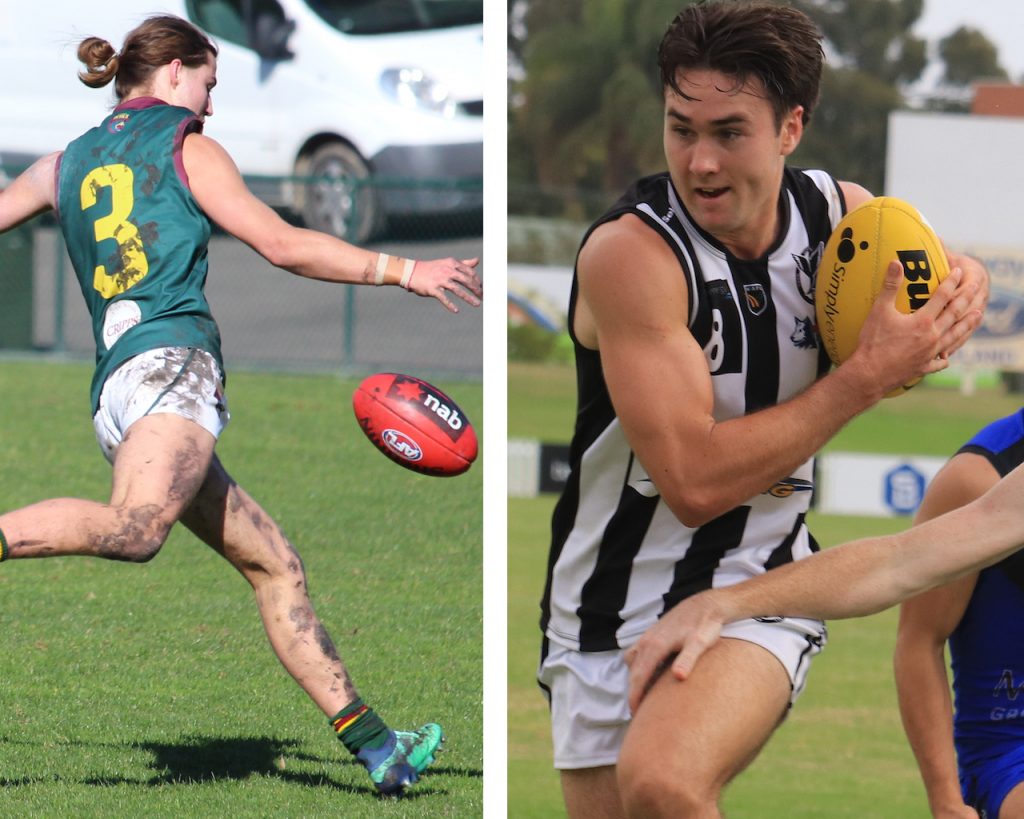 DESPITE remaining in the unknown of football’s temporary absence, Draft Central is set to ramp up its draft analysis with another new prospect-focussed series, Marquee Matchups. We take a look at some of the high-end head-to-head battles which look likely to take place as the class of 2020 eventually takes the field, comparing pairs of draft hopefuls to help preview who may come out on top.

The pair next under the microscope – Tasmania’s Oliver Davis and Swan Districts’ Zane Trew – make up two of the most promising inside midfielders in this year’s cohort. Both are incredibly tough and consistent, able to prise the ball out at stoppages and set their sides on the front foot from midfield. Ironically, they lined up on the same side during last year’s fixture between Australia’s Under 17s and New Zealand, both impressing through the engine room rotation. In 2020, they will inevitably meet during the proposed Under 18 National Championships, with Davis a leader among the Allies group, and Trew an important cog for Western Australia.

Davis enjoyed a stellar, largely uninterrupted run for his state in its inaugural full-time NAB League campaign, running out 13 times for an average of 22 disposals. He also broke through for a maiden Allies Under 18 appearance, picking up 10 touches against Vic Country on home turf. On the other hand, Trew suffered some bad luck on the injury front to be restricted to just three WAFL Colts games, but impressed in each. He also missed WA’s Under 18 campaign as a result, but is as professional as any current prospect and should be raring to go this year.

Strength is one key athletic area which is difficult to measure in these tests, but both manage to show it on-field. In these parameters, their respective results match up to those typical of inside midfielders; boasting agility good enough to see them slip out of congestion, power in their legs which translates to the solid jumping results, and not an overly large helping of speed. The two broke dead-even over 20 metres, and will look to improve their explosive burst over the course of 2020. Trew’s yo-yo test score of 20.8 is understandable considering the amount of time he spent on the sidelines in 2019, but both players should look to really boost that number to better suit their position at the next level.

It is quite tough to take a hell of a lot away from numbers over such a wide gap in games, but the similarities are evident between these two players in the data provided.

Davis was a figure of consistency as a bottom-ager, moving through midfield as the Devils’ primary ball winner and main contested asset. His 22-disposal average can attest to that, along with averages of 7.8 tackles, 5.4 clearances, and 5.1 inside 50s. It goes to show that a lot of his possessions come at the coalface, with long kicks his outlet of choice.

Trew is a touch different in the sense that he extracts more significantly via hand, but his ball winning ability is just as prominent as he boasts a higher average across three games – largely thanks to a 40-disposal performance which we will get to later. The West Australian’s numbers stack up well across the board, and display the same contested strength as Davis.

Both prospects put their accumulative value on full show in our chosen performances, racking up game-high numbers and respective personal-bests for 2019 in terms of disposals.

Davis’ big outing came in tight a loss to Dandenong, which boasted the likes of Hayden Young and Mitchell Riordan in its midfield. Davis’ work rate came to the fore against stiff opposition, digging in to collect 33 disposals; split between his contested work (five clearances), and ever-improving spread away from it (seven marks). He pumped the ball inside attacking 50 nine times, too, showcasing that kick-first approach.

A handball-happy Trew also enjoyed a day out, but stands a level above Davis here in the sense that it came in a win, and he also managed to crack the 40-disposal mark. This was Trew’s final WAFL Colts game for the year, and was a display which had been building after efforts of 21 and 26 disposals. His two-way work rate came to the fore with 10 tackles, and that undeniable strength at the contest helped him flick out plenty of passes from the middle via hand.

While there are some obvious similarities across the strengths of either player, the subtle differences in their respective styles can also be observed.

The distinction of clearances on Davis’ side, to extraction for Trew in terms of contested ball is quite deliberate. While Trew is a terrific clearance player himself, he has been shown more significantly to use his strength and awareness to release handballs to teammates on the run, rather than simply look for meterage. On the other hand, Davis has largely taken the quick entry approach in similar situations, able to use his agility to make small openings and pump the ball forward via foot at the first opportunity. He seems to be finding a better balance in his short-range kicks and handball outlets as time goes on.

Both players are incredibly tough going both ways, and remain just as relevant in their defensive duties as they are going forward. Tackling is listed as a strength on either side, and rightly so as the two love to dig in with averages of over seven tackles each per game. But those slight differences in agility against strength, and first options by foot or hand are the things which set these two prospects apart.

The improvements slapped next to the names of inside midfielders almost feel pre-set at times, and while these two may be working on some of those typical areas, they are more advanced than most overall.

Both will inevitably be working on their speed to achieve that eye-catching burst from congestion, despite not being punishably slow at this point in time. For Trew, it is listed as breakaway speed as he tends to stand up in tackles a touch more than Davis, and could benefit from translating his strength in different ways.

Davis has the agility to keep out of trouble, but often throws the ball straight on his boot in traffic. As mentioned, he seems to be improving in that area, and is quite capable of hitting up shorter options with time going inside 50. On the flip-side, Trew is a highly skilled disposer by foot and could be even more damaging if he utilised that asset a touch more – it is just a matter of finding balance.

Something which is not listed for either player, but will make them more complete prospects is the factor of scoreboard impact. Both managed just a goal apiece last year and while Trew has the penetration to find the goals from range, could always do so more often as Davis would hope to.

Responded well to being left out of the Allies’ 23, bouncing back to his usual ball-winning ways as a constant at the stoppages. Provides a good mix of competitiveness going both ways, finding the ball constantly but also tackling hard without it. He did show some burst and a willingness to kick forward on occasion – like with his centre clearance in the final term – and has the potential to be more effective in use. Was the skipper for the day as a bottom-ager, so has some pretty impressive traits already and is quite obviously talented.

There’s a lot to like about the Swan Districts product as a solidly built midfielder. Starting at the opening centre bounce, Trew’s first big play was a releasing handball forward which opened up play, followed by a composed kick across the 50 that highlighted his rare vision. Later in the game, his overhead marking came into play as he floated between the 50 arcs, contesting hard in the air. Trew’s aggression also came to the fore as he was not afraid to get stuck in and lay some hard tackles.