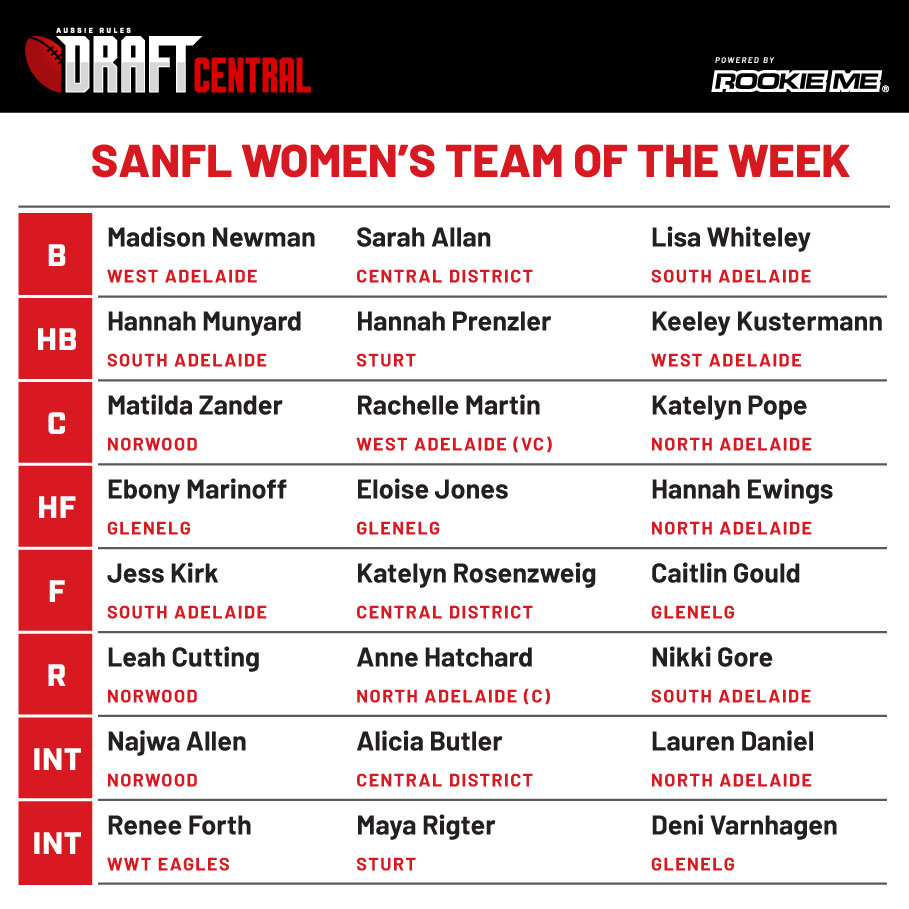 A TRIO of teams each had four representatives in our South Australian National Football League (SANFL) Women’s Team of the Week in Round 5 as football returned to the state’s elite competition. North Adelaide, South Adelaide and Glenelg all had four representatives in the team, with other winners, West Adelaide and Norwood, as well as Central District having three players. Sturt had two and Woodville-West Torrens the one in what was a really difficult week to select just 24 players.

North Adelaide had a massive 77-point victory and had a plethora of eligible representatives who could have squeezed into the side, however four achieved just that feat. Anne Hatchard was the dominant player over the weekend and earned the captaincy for her ball-winning efforts through the middle. She is joined the team by fellow midfielder Katelyn Pope who was named on a wing, as well as young gun Hannah Ewings at half-forward and Lauren Daniel on the bench.

South Adelaide and Glenelg played out a thriller with both teams having plenty of top-end quality and had one third of the Draft Central SANFL Women’s Team of the Week between them. South’s Nikki Gore was a star through the midfield and starts onball with Hatchard, whilst Hannah Munyard – who predominantly played on the wing – managed to win touches all over the ground and due to the strength of the midfield lands at half-back in this team. Also in the back six is another AFL Women’s talent in Lisa Whiteley, whilst competition leading goalkicker Jess Kirk slotted three majors to continue her stranglehold on that award and made the side.

While the Tigers might have lost, they had their fair share of top performers, with three players making the 24-player squad and another making the emergencies. The Tigers have three of the six forward spots with midfielder Ebony Marinoff one pushed out to a flank – though she did rest forward – given the midfield strength. Fellow Crows players Eloise Jones and Caitlin Gould are the others to make the starting side. On the bench, Deni Varnhagen makes the side, whilst Soriah Moon narrowly missed out.

Another game had plenty of representatives with Norwood’s victory over Central District. The Redlegs had starting ruck Leah Cutting made the side once more, whilst up and coming midfielder Matilda Zander booked her spot in the tough midfield group. Najwa Allen also made her way onto the team, coming off the bench in this side. For the Bulldogs, they have the bookends in Sarah Allan and Katelyn Rosenzweig up either end, whilst Alicia Butler was also impressive in the loss and makes it into the squad. Fellow Bulldog, Latiah Huynh was close to making the side and earned a spot as one of the emergencies.

West Adelaide also had a trio of players making the 24-player squad, led by Rachelle Martin who starred and earned the vice-captain nod in our side. Also in the team was reliable defenders, Madison Newman and Keeley Kustermann who were superb out of the back 50. Fellow young midfielder Abbie Ballard was also named as emergency for the team. Rounding out the team was Sturt young gun Hannah Prenzler at centre half-back, alongside Double Blues co-captain Maya Rigter on the bench, whilst Woodville-West Torrens utility Renee Forth finalises the full squad.