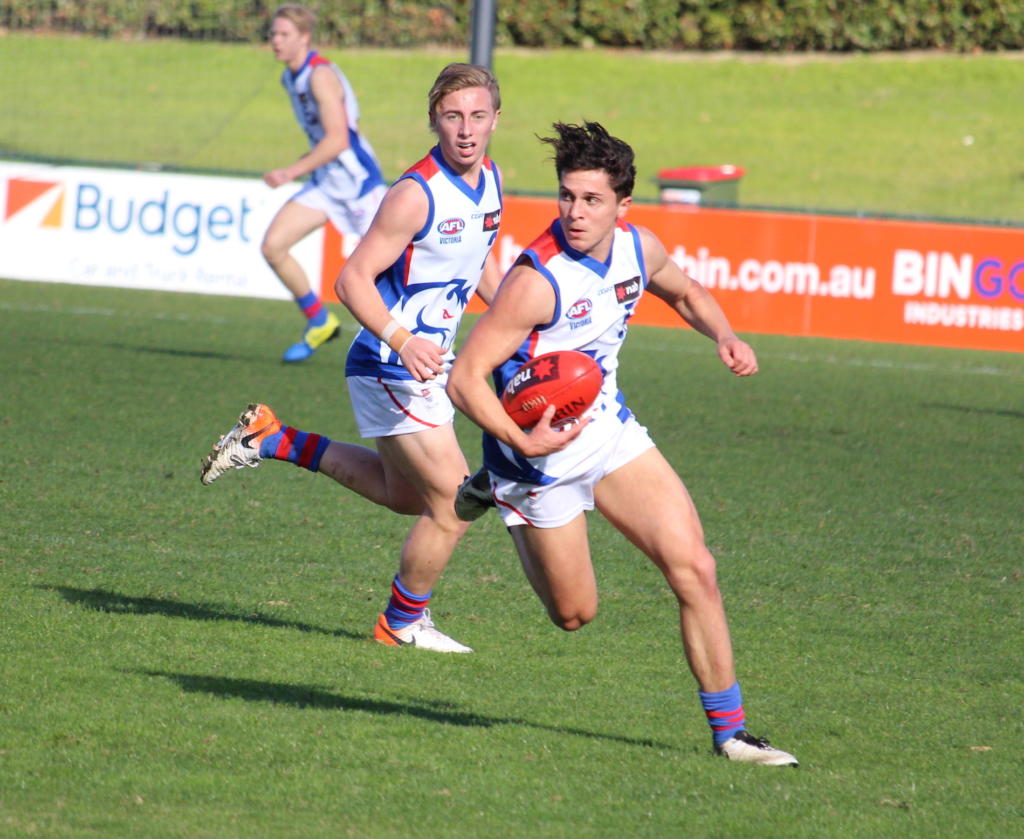 IF you are missing footy like we are, then let us somewhat salvage that with a look back in a new series of Classic Contests. In today’s contest we look at one of the would-have-been Round 14 clashes in the NAB League this year between the Oakleigh Chargers and Tasmania Devils. In this edition, we wind the clock back just one year to when the two sides met in Tasmania’s maiden full-time campaign.

Oakleigh may have been the much higher fancied side in 2019 when compared to incoming full-time side, Tasmania, but the two regions sat level on points coming into their Round 6 NAB League clash. The Chargers got up in Rounds 1 and 2, but were starting to feel the effects of school and representative football commitments having suffered three-straight losses. A second interstate trip in three weeks would hardly help, with Tasmania gaining the benefit of another home game to help buoy its 2-2 record. The Devils had notched consecutive wins after their Round 2 debuts, but lost to Western in Round 5.

Co-captain Trent Bianco would taking the reigns solo as the sole eventual draftee in Oakleigh’s side to make the trip, while North Melbourne rookie Matt McGuinness was Tasmania’s lone AFL product afield with Mitchell O’Neill absent. In a boost to the Devils’ lineup, they would boast bottom-aged Allies hub members Oliver Davis, Sam Collins, and Jackson Callow, along with Patrick Walker and leading 2021 hopeful, Sam Banks.

As the action got underway at North Hobart Oval, the Victorians were unable to take full advantage of starting at the scoring end, taking a four-point lead into the first change as their four superior scoring shots all ended in behinds. Tasmania, blessed with kicking boots, showed them the way in the second term, keeping the Chargers goalless while adding two majors to snatch a nine-point buffer heading into half time.

One of the outstanding traits of Oakleigh’s side in 2019 was it was able to score quickly, and signs began to look ominous as the Chargers booted three goals within the first 11 minutes of the third term. The Devils were able to mount somewhat of a comeback, but some inaccurate kicking of their own late in the piece would prove costly. A grandstand finish was set up with just one point separating the sides heading into the final term, and the two teams did not disappoint.

Four lead changes would occur, with Banks giving Tasmania the jump early, only to see Thomas Lovell edge Oakleigh back in front twice with his third and fourth goals. Jye Menzie‘s shy at goal with under three minutes left on the clock would prove Tasmania’s last chance at victory, as Oakleigh broke the hearts of home fans and travelled back to the mainland with four points.

Lovell came up clutch with his four goals making up almost half of Oakleigh’s tally, but it was Bianco who proved the standout of the day. The Collingwood draftee was a cut above the rest, racking up a monster 42 disposals in what was a complete performance, putting him 14 touches ahead of the next-best ball winner – Josh May, 28 disposals. Fraser Elliot was another Charger to impress from midfield, while Davis (21 disposals) was Tasmania’s leading ball winner, and the pairing of Will Harper and Rhyan Mansell combined for four goals.

The Devils would go on to add just two more wins to their tally in 2019, putting up a valiant effort in Wildcard Round to lose by only six points to Calder. Oakleigh finished the regular season in third at 11-4, and went on to win the NAB League premiership on the back of an unstoppable late-season run. Six Chargers, including Bianco were drafted. Most famously, the region boasted both of the first two picks in the 2019 draft as Matt Rowell and Noah Anderson headed to the Gold Coast SUNS.