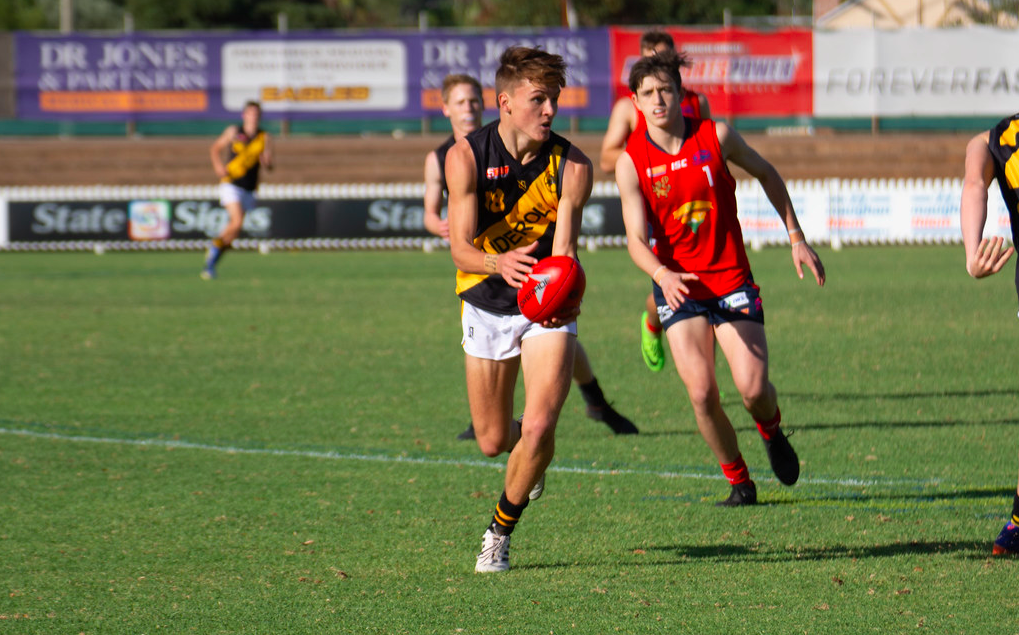 AS if you needed any reminder, state league football returned this past weekend with all South Australian National Football League (SANFL) grades kicking off season 2020. In this year’s first edition of Caught the Eye, we highlight the key performers from each Under 18 side who stood out in the opening round of action. For extended profiles on each player, click on their names highlighted in red, and for our full scouting notes, click here.

Our scouts said: “The classy half-back showed terrific pace to break the lines and possesses a sweet left-foot kick, but was able to balance his offensive prowess with defensive duties well.” – Michael Alvaro

Verdict: Robins comes from decent pedigree as the son of former Melbourne and Richmond player, Haydn, and could be a dashing defender to keep an eye on. He was part of South Australia’s carnival-winning Under 16 squad in 2018 and while he is outside of the current academy bubble, could push for state selection if his form continues – especially given a shortage of options in his position.

Our scouts said: “There is a lot to like about the zippy bottom-ager, who showed flashes of brilliance moving forward from midfield. He has a happy knack of finding space on the outside, where he can carve the opposition up with line-breaking speed and precision kicking.” – Michael Alvaro

Verdict: While he is quite light-on, there is no doubting Murley’s hunger for the contest. His speed and agility often get him out of trouble anyway, and the bottom-ager pulled off a couple of incredible passes going forward which he placed perfectly between opposition defenders. He earned Under 16 All Australian honours for a reason, and may creep into the Under 18 state squad in an outside role or up forward.

Our scouts said: “A tale of two halves for Newchurch, who went from an okay first half to a match-winning second half. It was clear even in patches through that first half he has the capability of doing something special with terrific speed on the lead, and great evasion techniques.” – Peter Williams

Verdict: Be prepared to hear plenty more about Newchurch, who looms as a potential first round candidate. That may prove a bittersweet statement for Adelaide fans, with the Crows set to claim first dibs on the Next Generation Academy (NGA) prospect. His evasiveness and ability to break games open make him an eye-catching prospect, and one who should put together a decent highlight reel by season’s end.

Our scouts said: “A really consistent four-quarter effort from Chamberlain… he was fierce around the stoppages and laid some huge tackles, and while his aggression could sometimes see him give away free kicks, he was always willing to crack in and have a go.” – Peter Williams

Verdict: It was a hell of a start to the season from Chamberlain, who put in an incredible first half display. His burst from the contest, ability to cover the ground, and aggression make him a well balanced midfield prospect. While he is the Bloods’ primary ball winner through the inside at Under 18 level, expect him to feature a touch more on the outside given his pace and slight frame as he climbs the grades or slots into the state squad.

Our scouts said: “It was a huge game from the talented tall midfielder, who would have certainly gotten recruiters’ attention with a commanding game playing through midfield and up forward. Poulter won plenty of the ball but it was his disposal that really stood out, with his long and accurate kicks hitting targets inside 50 and his long handballs with great vision also catching the eye.” – Ed Pascoe

Verdict: Undoubtedly the player of the round across the Under 18 competition, Poulter continues to rise as a bolter in the South Australian field. While he has some filling-out to do, Poulter is the ideal size for a modern day midfielder at over 190cm, and has all the athletic traits to also thrive up forward as many champion midfielders do at the next level. If he continues to return such well-rounded performances as this one, don’t expect to see him remain at the Under 18 level for long.

Our scouts said: “Kraemer was a bull for South Adelaide, using his strong frame to impact stoppages and lay strong tackles. He played with a lot of grit and determination, attacking the footy hard and also laying some crunching tackles to be the real grunt in the talented South Adelaide midfield.” – Ed Pascoe

Verdict: The Panthers have such a versatile engine room, and Kraemer is arguably the leader of it given the talented bottom-agers around him. At 185cm, he is built well and does all the tough stuff around the stoppages, remaining relevant going both ways. He played every Under 18 game last year en route to a Grand Final appearance, but should have eyes on climbing the grades in 2020 and slotting into the state side once again.

Our scouts said: “(McDonald) was terrific around the stoppages… he was not afraid to have a crack and applied plenty of tackling pressure around the ball. Despite being eligible for the Under-16 competition, McDonald’s productivity and dominance in-tight has ensured he is one of the Bulldogs’ most exciting prospects already.” – Tom Wyman

Verdict: It was hard to believe that McDonald is an Under 16 player watching him go about it on the weekend, and bringing it to some of the better Under 18 midfielders in South Australia. His willingness to hunt the ball, extract, and work both ways was impressive, and we will surely see much more of the same over the next couple of years.

Our scouts said: “The Sturt midfielder was everywhere at Elizabeth Oval… akin to fellow on-baller Mani Liddy, Powell started the contest well, bursting out of the midfield following the opening bounce, having a bounce and streaming inside-50 before snapping a behind.” – Tom Wyman

Verdict: Powell was certainly raring to go after missing large chunks on 2019 through injury, and started the season on the right foot. His burst from the contest was on show, as was his ability to accumulate with a game-high 34 disposals. He was on a different level to much of his opposition on the weekend, and while it would be interesting to see him go up against a strong Eagles midfield next week, expect to see Powell make his way up the ranks soon if his form persists.