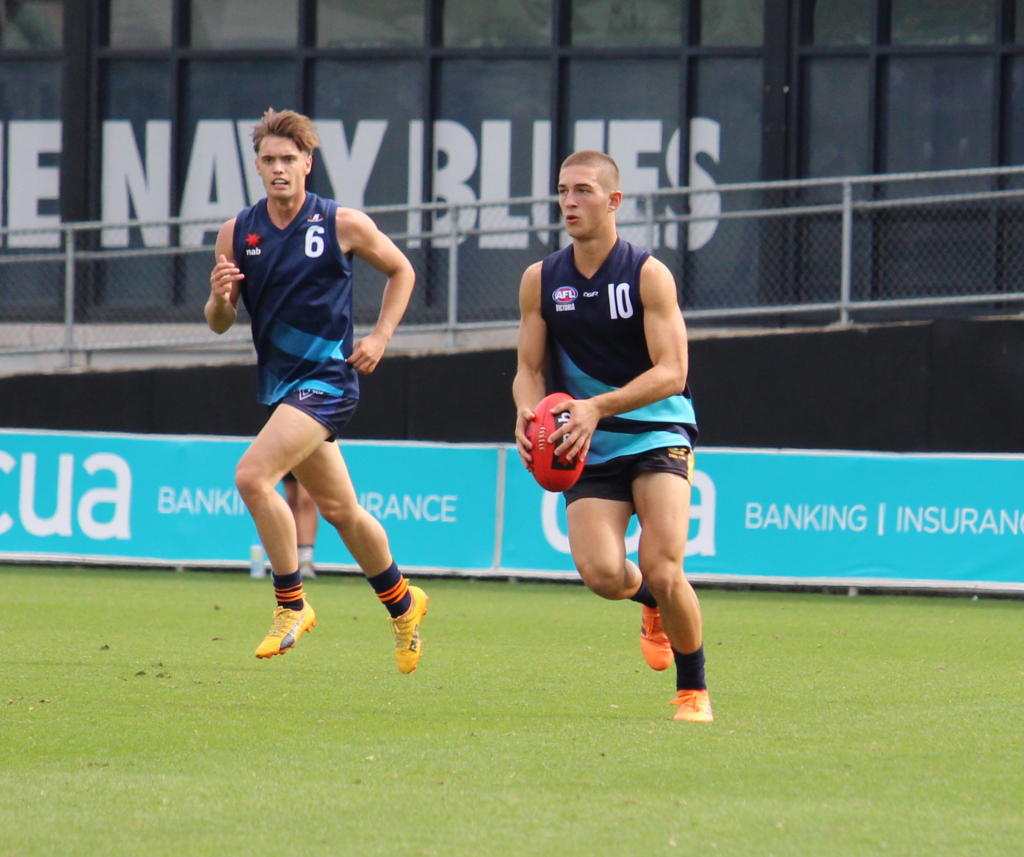 Next under the microscope in our AFL Draft watch is Oakleigh Chargers’ Will Phillips, who has a terrific balance of inside and outside traits through the engine room – able to dig in and find plenty of his own ball, while providing forward movement in his bursting runs through congestion. The 179cm prospect averaged a tick over 22 disposals across 10 games in Oakleigh’s premiership-winning NAB League campaign last year, with his form enough to warrant a call-up to Vic Metro’s Under 18 side as a bottom-ager.

Having attended centre bounces with the likes of Matt Rowell and Noah Anderson through the Chargers’ program, Phillips is looking to become a leader in each midfield he lines up for in 2020; juggling his time between school football commitments at Caulfield Grammar, Oakleigh’s premiership defence, and representative duties with Vic Metro. Few others can extract possession like Phillips, making him a locked-on top 10 prospect for this year’s draft.

Just a tackling machine who keeps on battling hard. Philips is a work horse who continues to dig in and win the ball and do all the team things to support his teammates. He laid a massive 14 tackles for the game while winning another 20-plus disposals. One of the better midfield options heading into next year, he is strong at the stoppages and can spread to the outside to win it as well and set up teammates. He kicked a goal in the third term by winning the ball from a stoppage, fending off an opponent and snapping it off his right at the top of the square. He then set up Joel Jeffrey with a goal thanks to a very nice kick inside 50.

The bottom-ager showed why he will be a highly touted prospect next year with a competitive effort through midfield. Just attacks the ball with vigour not to dissimilar to Rowell, and while he can be handball happy at times, had an even spread of kicks and handballs on his way to 16 touches, also hitting the scoreboard with two majors.

Phillips backed up his impressive game in the first final to once again make an impact in the preliminary final, showcasing his ability to find the ball and use it well, while also showing great movement in traffic and composure with ball in hand. Phillips has been playing mostly on the wing where he does well but he looks most natural winning his own ball and exiting the stoppages with his acceleration out of traffic and ability to weave through congestion and hit a target by hand or foot. He can also impact the contest with his strong tackling which he also showcased against Sandringham.

Phillips was fantastic in Oakleigh’s strong start to the game, seeing the bottom age midfielder show some good clean hands in transition and getting involved in a number of plays going forward. Mostly playing on the wing he had no issues winning the ball with his smart running and willingness to also get in and win his own ball. Phillips kicked a nice goal in the third quarter showing some dash and getting back the handball to snap on the run. Phillips finished the game with 29 disposals, six inside 50s and a goal.