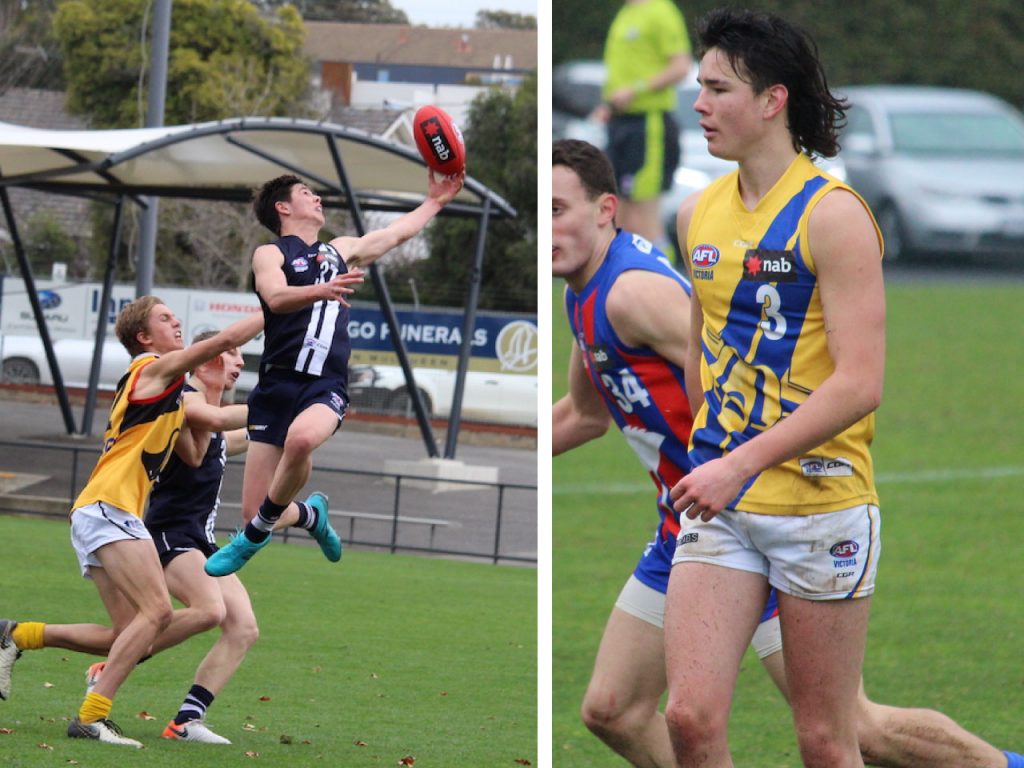 The pair next under the microscope – Western Jets’ Eddie Ford and Geelong Falcons’ Oliver Henry – are two high-flying prospects who have already lined up on opposing sides at NAB League level, as well as in last year’s Under 17 Futures All Star showcase fixture. While neither player was able to break through for a representative Under 18 berth in 2019, both ran out for Under 17 digs in the ‘Big V’ after also representing their regions in the 2018 Under 16 National Championships.

Western’s Ford is a forward/midfielder with plenty of x-factor, able to break games open with his scoreboard impact and knack for taking big marks. Henry is similarly gifted in the air, but is more of a swingman having rotated from end-to-end for the Falcons last year. He is likely to spend a touch more time up forward in 2020, and will be a key part of Geelong’s talented squad after 15 NAB League outings last year. Ford managed one more appearance for the Jets as a bottom-ager, and will be a focal point as he looks to develop his midfield craft.

There is no recent testing data to feed off from either player due to precautionary preseason management; with Ford sitting out testing on account of a persistent knee niggle, while Henry took the safe route with his tight left hamstring.

However, it only really takes a couple of glimpses of both prospects on-field to recognise their athletic values. Both possess terrific vertical leaps, helping Henry to play above his size up either end, and allowing Ford to take eye-catching hangers in full flight. Ford is perhaps a touch quicker off the mark, and both players are quite agile in general play given their relatively lean builds. Endurance is an area which remains to be seen on either side, especially given their interrupted preseasons and the extended break.

The closeness in this pair’s 2019 statistics is quite satisfying, each running out for a virtually identical amount of games and returning very similar numbers. The small differences can also be attributed to their respective roles; as Ford was able to run through midfield and pump forward some clearances while adding to those inside 50 numbers, while Henry penetrated both arcs in his swingman duties and provided slightly better marking numbers due to his intercept marking ability in defence. His role as somewhat of a third leading tall up forward also contributed to that, allowing the Geelong product to hit the scoreboard more often with over a goal per game. Ford booted goals in six seperate games, including two with multiples, while Henry managed multiples in five of his seven scoring games.

Our selections make it seem as if Dandenong were whipping boys in 2019, but it is purely a coincidence that both players performed well against the Stingrays. Ford found the ideal balance between his midfield and forward craft, shifting through the engine room at times while spreading well around the ground and making his impact felt when forward of centre. His efforts were in vein given Western’s big loss, as were Henry’s in Geelong’s draw with the Stingrays. The Falcon’s seven marks as a forward target showcased that ability to play above his size, with eight of his 11 disposals also ending in scores. Henry did have higher disposal games, primarily in the backline, but we feel this performance better exemplifies the role he can play at the next level.

In what was hardly a memorable early-season clash between Geelong and Western, these two bottom-aged guns were kept relatively quiet. Still, they were able to show flashes of their best form, with Ford nearing his overall disposal average and finding space on the outer, while Henry was a viable marking option for the Falcons. Neither player was able to find the big sticks, and it is quiet understandable as Geelong managed just two majors to Western’s seven.

If you weren’t already aware, both of these players are terrific markers of the ball. While vertical leap is a listed strength on either side, Ford and Henry use it in slightly different ways. While Ford can pull off those explosive pack marks, Henry uses his leap to intercept while sitting in the defensive hole, or to get extension on the lead as a forward. Henry’s dual-purpose marking ability makes him an ultimate utility, which is exactly why versatility is also listed as one of his assets. Ford’s knack for hauling in those mercurial grabs gives him a touch of x-factor, which is also seen in his ability to impact the scoreboard and break games open in quick time. Another string to Henry’s bow is his composure, usually a sure disposer by foot who fared well while the Falcons were under enormous pressure in 2019. Both players only need a few touches to truly damage the opposition, with their combination of athleticism and freakish skills setting them apart.

Pin-pointing improvements for such high-level players is often an exercise in splitting hairs, but we continue to give it a crack. Neither of the listed areas are necessarily knocks on the players, but more so little adjustments which could be made along the path to becoming more complete prospects.

With Ford eying off more time in the midfield, he will need to up his accumulative value and become a more consistent figure in games. While stats aren’t everything and his ability to tear games apart in small bursts works up forward, imagine what impact he could have with more of the ball.

For Henry, while quashing his versatility would be silly, having him lock down or show greater strength in one specific role sometimes makes a prospect easier to recruit, as you know exactly what kind of player to mould at the next level. Given he can play like a key position outlet at just 187cm among juniors, he can perhaps work on better playing to his size in harnessing that ground ball game to excel in the AFL system.

Started the game with a bang, picking up eight touches and booting two goals in an eye-opening first term. He had his hands on it early leading outside 50, then kick a great running goal on the right from 40m out. His second goal came when Ford read the tap perfectly, pushed off his opponent in Errol Gulden and chucked it on his boot for it to sail through.

It showed his high-level footy IQ and goal sense all in one play. He was still very busy throughout the game with some nice touches, though his first term was his standout. Had a shot from 45m on the run in the third term but it sprayed to the left. His best is very good.

The talented Geelong Falcon who is the younger brother of rising Cats’ defender Jack Henry showed plenty of his talent in what was a hard day for the Team Dal Santo forwards. He was still able to catch the eye; he hit the scoreboard in the last quarter with a quality intercept mark in the goal square showing his speed and quick decision making.

Henry was strong overhead and clean at ground level but he also did the what was required defensively as well with some good tackles and smothers, he looks to be one of the most dangerous forward prospects in the 2020 draft.