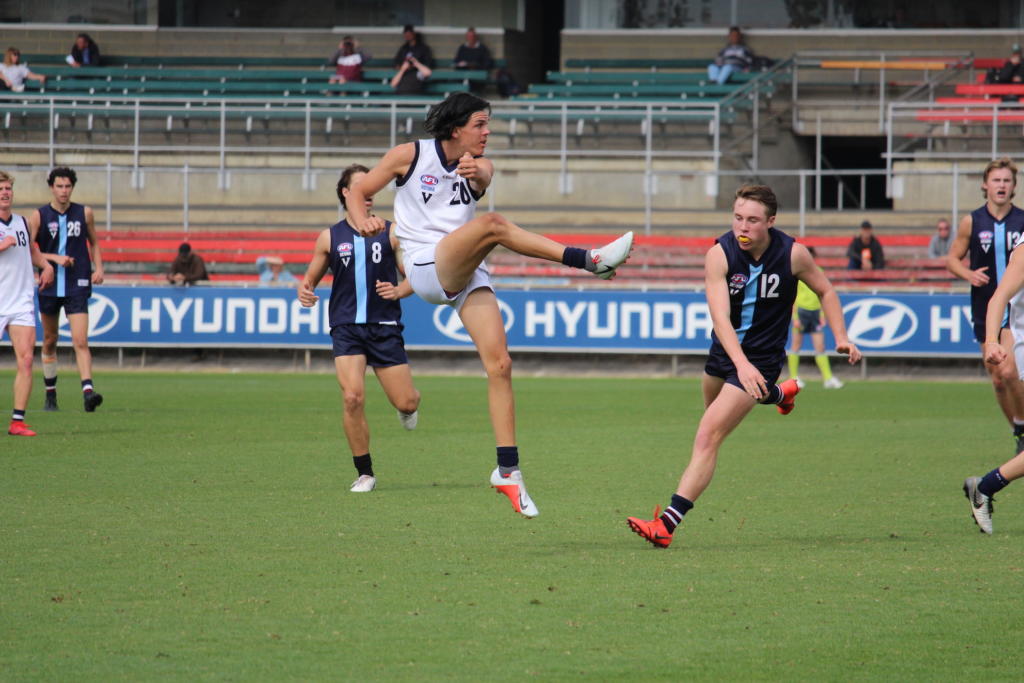 Next under the microscope in our AFL Draft watch is Murray Bushrangers’ Elijah Hollands, an exciting forward/midfield prospect who remains right in the top 10 discussions, despite the fact he is sitting out 2020 after tearing his ACL during preseason. Having previously afforded most of his seasons to school football with Caulfield Grammar, Hollands was set for a full-time dig in the NAB League with Murray upon the completion of his Year 12 studies in 2019.

The 188cm Wodonga native has a knack for the mercurial, able to break games open with bursts of brilliance in the form of opportunist goals, bursting runs, or high-flying marks. Hollands was one of the rare bottom-agers to play all four national carnival games as a bottom-ager in 2019, and further proved his status as a high-end prospect with an eye-catching performance in the Under 17 Futures All Stars fixture.

While he spent most of his time as a forward or on the outside at the Under 18 level, the Murray product had eyes on moving into the midfield in his top-age season. His value over time in the engine room remains to be seen, but one thing for certain is that Hollands is a rare talent and one of the absolute best of his cohort.

It was a near-complete performance from the Team Brown captain, who booted two classy goals in his time between the midfield and forward line. His work rate in the engine room was top notch, digging in to win the ball himself and tackling hard going the other way with the opposition breaking.

Hollands also impacted the centre bounces from his starting position on the wing early on, proving clean and composed when the footy was hot. His first goal was a typical one, propping after he collected the loose ball and snapping home. The second was a show-stopper, slamming the ball through the big sticks from 55m out off a couple of steps. Is one of the leading prospects at this early stage, and narrowly missed out on best afield honours.

NAB League Round 14 vs. Northern

Hollands played through the Bushrangers’ midfield, as well as up forward where he was a regular target. Hollands had a big impact early on when he spoiled a marking contest after a poor kick-in from the Knights, resulting in Murray’s first goal of the game.

He had an electric 10 or so minutes in the first term, where he provided spark and x-factor around the contest. Hollands’ forward craft is one of his best attributes and it was evident during the match, with the talented bottom-ager finding plenty of space across half-forward.

Under 18 National Championships vs. Vic Country

Is so exciting and not only does he have the offensive capabilities, but works hard defensively as well, laying a number of huge tackles in the forward half. Hollands has lightning hands in congestion and is able to win the hard ball and quickly dish off to a teammate before being dispossessed.

He had a huge highlight in the second term with an unbelievable goal out of nothing from a forward stoppage, roving Charlie Comben and booting the goal from just inside 50 close to the boundary line.

Under 18 Victorian Trials vs. Vic Metro

Hollands was seriously impressive up forward, he was a constant threat and was often minded by one of 2019’s top prospects, Dylan Williams. He kicked his first goal in the first quarter running into open goal and he set up others with his kicking inside 50, all class.

One of his standout features was his ability to keep strong in the contest and get his arms up, and his second goal came from a classy snap goal 40 metres out in the third quarter. His best bit of play also came in the third quarter where he worked hard to keep the ball in play on a wing and used the ball well with a long handball to a running teammate inboard.

NAB League Round 3 vs. GWV

A classy forward who just has that knack of finding the goals, he was disappointed in himself missing a few early chances, before kicking two for the game, including a natural instinct shot off the left to win the game for the Bushrangers. Hollands also shows good second efforts, giving off a quick handball before following up with a tackle immediately after.

NAB League Round 2 vs. Bendigo Pioneers

Hollands was consistent over four quarters and never seemed to fade out of the contest. He was a solid target up forward for the Bushrangers, specifically in the final term when he had a couple of shots on goal that only failed to register a score because of the tough weather conditions. Hollands also displayed his athletic ability, footy smarts, and foot skills throughout the game.

NAB League Round 1 vs, Gippsland

The bottom-age talent showed his class early inside 50, winning a number of possessions on the outside and using his long kicking ability and was one of the top ball winners in the first half. He missed a few opportunities to capitalise from set shots, finishing the game with 1.3, but he timed his leads well, protecting the drop zone with his timing. He was quieter in the second half, but his first half showed the potential he has not only as a forward, but further up the ground as well.