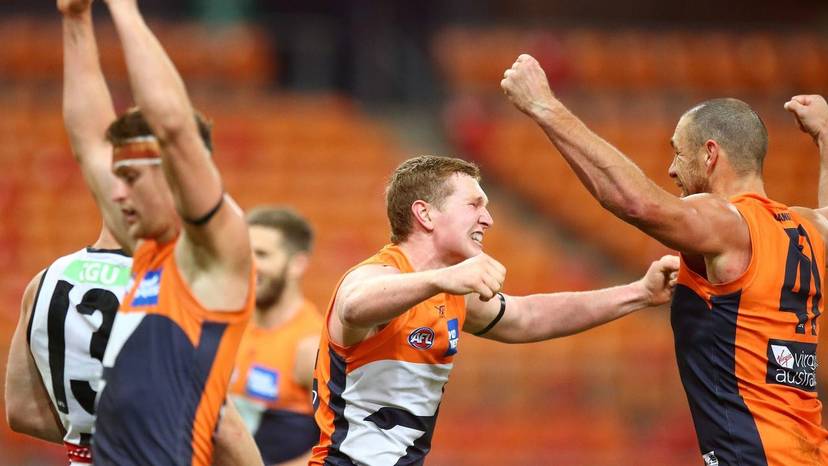 13 RECRUITS from the 2019 AFL National Draft ran out for their respective teams on the weekend, and we take a look at how the best handful of them performed. From a Gold Coast trio who continue to flourish, to a number of other high picks who earned their spots, the draft class of 2019 is already showing promising signs for the future. There were a total of four debutants from last year’s cohort in Round 4, with others either holding their spots or returning to the line-up.

STAR OF THE ROUND: Tom Green (GWS GIANTS)

In a low-disposal game, Green was among the GIANTS’ top five ball winners as they snuck home to a thrilling win over Collingwood on home turf. Thrust straight back into the midfield fold, the GWS Academy graduate looked at home in his second AFL outing, getting stuck straight in with the tough stuff to notch 12 contested possessions and seven clearances. Last year’s number 10 draft pick was also able to boot his first goal at the elite level, and an important one at that given the final score.

A Thursday night debut saw Butler collect 14 disposals in his usual defensive role, slotting in well across half-back and generating some decent forward momentum. While he kicked well below his usual rate at 21 per cent efficiency, the Sandringham Dragons product put the ball in dangerous areas, breaching either arc five times and having a hand in four score involvements as the Bulldogs downed Sydney.

After serving an avoidable suspension, Pickett returned to the Demons’ fold and was one of his side’s more lively forward 50 options. He was often Melbourne’s most dangerous outlet at the fall of the ball, wreaking havoc with his ability to hit the contest at full pace and extract, while also doing all the right things defensively. He may have hit five turnovers and could not quite find the goals, but you knew something was about to happen when Pickett neared the ball, and he brings a different dimension to the Melbourne team.

Rowell may finally have been knocked off his ‘Star of the Round‘ perch, but still put in a performance worthy of the honour in his fourth AFL appearance. The Oakleigh Chargers graduate clicked over the 20 disposal mark once again and added another two goals to his haul, while proving a key cog in the SUNS’ engine room operations. Not many draftees have been able to match the grunt work of Rowell, who continues to put up fantastic tackle and clearance numbers to prove his two-way relevance.

Having kept his spot in the 0-4 Fremantle side, Young repaid the faith this week with arguably his best performance in three games at the elite level. Stationed in his usual half-back post, the 19-year-old provided a great glimpse of his damaging left-foot kick with a spearing goal assist pass as he cut through the corridor, while also contributing seven rebound 50s. As he adjusts to the pace and pressure of the AFL, Young has been able to better showcase his offensive game and join in the play going both ways.