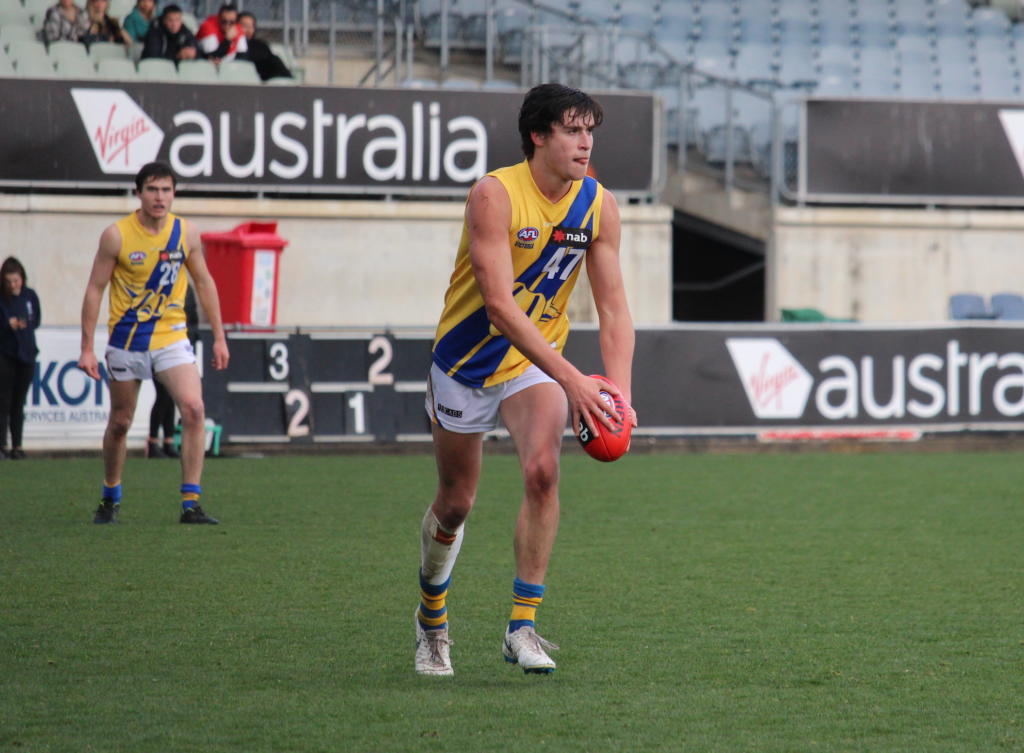 IF you are missing footy like we are, then let us somewhat salvage that with a look back in a new series of Classic Contests. In today’s contest we look at one of the would-have-been Round 13 clashes in the NAB League this year between the Western Jets and Sandringham Dragons. In this edition, we wind the clock back just one year to when the two sides did battle in early July.

It seemed the end of the 2019 Under 18 National Championships, and a school football bye would spell trouble for the Western Jets as they readied to face Sandringham Dragons in Round 13 of the NAB League, but one inspired term helped the hosts pull of an unlikely victory at Downer Oval.

The Dragons welcomed back a host of big names, with six of their eventual nine draftees taking the field; including the likes of Josh Worrell, Finn Maginness, and Round 4 AFL debutant Louis Butler. Western would also lay claim to a good bunch of its top-end talent, led by 2019 rookie draftees Josh Honey and Emerson Jeka.

Some more respect could, or perhaps should have been shown to Western from the neutral, as the two sides sat level with 7-4 records to that point. Further to it, Sandringham’s form had somewhat abandoned them during an undermanned period, losing its last two matches and narrowly escaping a defeat to the lowly Geelong Falcons. Western had also lost in Round 12, but picked up wins in its previous four outings to contend for a top three spot.

Just as there was nothing to separate the sides’ win-loss records, they went into the first break level at 3.2 apiece. That was before the Dragons threatened to take hold, edging out to an eight-point lead at half time with help from the scoring end.

Speaking of taking hold, that was exactly what Western was able to do in a game-defining third quarter. Having managed eight total scoring shots for the entire first half, the Jets piled on the same number of goals within an electric 25-minute period, keeping Sandringham to just one in the process.

While the Dragons’ top-end talent help to enact a late surge from 34-points down at the final break, the damage was well and truly already done, seeing Western hold on to win by nine points on its home deck. The win saw the Jets leapfrog Sandringham on the ladder, but both sides were also jumped by Oakleigh, who also came into Round 13 with a 7-4 record.

The small and tall combination of Lucas Failli and Aaron Clarke produced an evenly-split 6.4 towards Western’s total, just over half of the winning score. They were two of three Jets to boot multiple goals, while Hugo Ralphsmith led a trio of Dragons to manage two majors each.

Sandringham’s ball winners got to work despite the loss, as Ryan Byrnes led all comers with 28 disposals and a goal, while Maginness (24 disposals, one goal) and Butler (23 disposals) also impressed. Bailey Ryan was Western’s leading ball winner with 19 touches, followed by Honey on 18 and Morrish Medalist Lucas Rocci (16).

In an odd quirk, ex-Sandringham ruck Will Kennedy was named best afield for Western on the back of 15 disposals, six marks, 33 hitouts, and a goal. Bottom-agers from either side were also recognised, in the form of Western’s Cody Raak and Sandringham’s Lachlan Carrigan.

The Jets would go on to drop slightly to a seventh-place finish at 8-7, beating out Northern in an epic elimination final but going down to Gippsland in the semis. Sandringham remained consistent to finish fourth with nine wins and six losses, but fell short of its premiership dream in a preliminary final loss to Oakleigh.