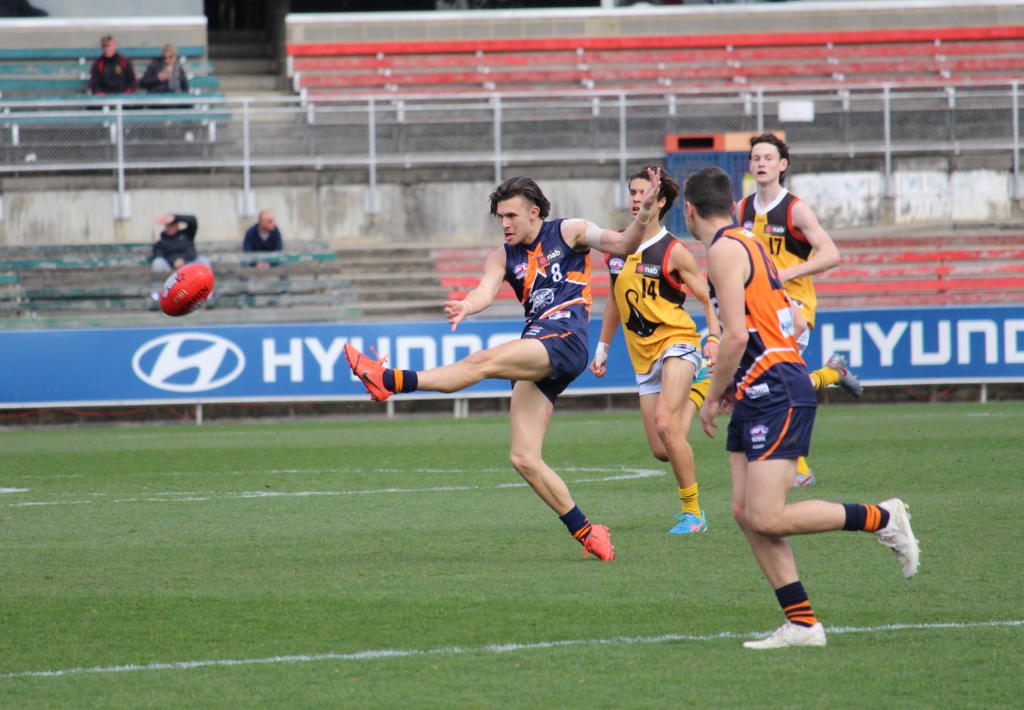 SIX different venues played host to the NAB League’s Round 13 fixtures in 2019, with a couple of big upsets kicking off the action, while Oakleigh and Calder came out big winners in their clashes against Country opponents. Some big names returned to the competition as the National Championships came to an end, and school football completed its bye rounds.

Western pulled off the weekend’s first upset victory, holding off a surge from Sandringham and its returning catalogue of big names to claim a nine-point win come the final siren. After Sandringham snuck ahead at half time, the Jets broke the game open with eight goals to one in a defining third term at Downer Oval. The Dragons would keep Western goalless in the last, but failed to make up the difference in time.

The small/tall pairing of Lucas Failli and Aaron Clarke split a combined 6.4 evenly for Western, while Richmond draftee Hugo Ralphsmith led a trio of three Dragons to boot two majors each. Fellow draftees Ryan Byrnes (28 disposals, one goal), Finn Maginness (24, one), and Louis Butler (23) were other high-end Dragons to perform, while Carlton rookie Josh Honey was among Western’s best with 18 touches.

Northern ensured the unlikely victories would roll on early in Round 13, trumping Gippsland by 43 points on the road. Akin to Western’s effort, the Knights battled hard in the first half but only led by two points at the main break, only to boot eight goals to one in a dominant second half display to take the four points back home to Preston.

The versatile Knights forward trio of Josh D’Intinosante (four goals), Ryan Sturgess, and Sunny Brazier (both three) dealt most of the damage as the contest skewed to one side, while Carlton’s Sam Philp (24 disposals, one) goal finished behind only Adam Carafa (28 disposals) in the ball winning stakes. Bottom-ager Sam Berry was Gippsland’s best in that department with 21 touches, while Saints draftee Leo Connolly had 18, and Philp’s Blues teammate Fraser Phillips, 13.

Murray could not quite keep the train going as it hosted the table-topping Eastern Ranges at Norm Minns Oval, falling four points short of its highly-fancied opposition. The Ranges managed to get out to a hot start, leading by 17 points despite wasting half of their 10 first term scoring shots. The lead was extended to 27 at half-time, but only worked to shift the Bushrangers into gear as they stormed home with a 6.6 second half to Eastern’s 3.0, as only wastefulness cost them in the end.

Ben Hickleton‘s season-best effort of four goals helped Eastern over the line, while Jimmy Boyer was one of two Bushrangers to notch three majors. Mitch Mellis put in a shift with two goals from 22 disposals, as he an Zak Pretty were beaten out only by Jye Chalcraft (29 disposals) in the ball winning stakes. In a rare instance, no 2019 draftees took the field in this fixture.

Saturday’s final fixture took the competition back to metropolitan territory, as Calder ran out comfortable 68-point winners against Dandenong at home. The Cannons shot out of the blocks with nine goals to two in the first half and despite being held well in the third term, prettied up the scoreboard with seven goals to nil in the final quarter to put an exclamation mark on the victory.

College punter Mason Fletcher booted four majors in this outing before his departure to the United States, joined by five Calder teammates as multiple goalkickers. Bottom-ager Ashton Williamson‘s three goals were a slight form of resistance for Dandenong, with Jack Toner another to stand up with 28 disposals. But it was Carlton draftee Sam Ramsay who led all comers on 32 touches, followed by bottom-age jet Jackson Cardillo (27, one goal).

Fast forward to Sunday, and Bendigo made its trip down to Tasmania worthwhile, downing the Devils by 29 points at Kingston Twins Oval. In a relatively low-scoring affair, the Pioneers were made to fight back from behind, booting six goals to Tasmania’s one in a one-sided second half effort. The win would also serve as redemption for Bendigo after going down to the Devils by two points in Round 7.

Oakleigh saw the round out with the biggest win of the lot, proving ruthlessly brilliant in front of goal to down and already lowly Geelong outfit by 87 points at Avalon Airport Oval. The Chargers led by over seven goals at the main break and never looked back, piling on a further 10 to Geelong’s three in the second half to finish with an incredible 20 goals and nine behinds en route to victory.

The forward partnership of Dylan Williams (five goals) and Jamarra Ugle-Hagan (four) proved unstoppable, with the likes of Reef McInnes (29 disposals, two goals) and Trent Bianco (24, two) also finding the big sticks and plenty of the ball. In a stacked Oakleigh side, Will Phillips and Lochlan Jenkins were also prominent with 21 touches each. Bottom-ager Charlie Lazzaro (23 disposals) was among Geelong’s best alongside 2020 co-captain Cam Fleeton (19), while over-ager Charlie Sprague booted three majors.