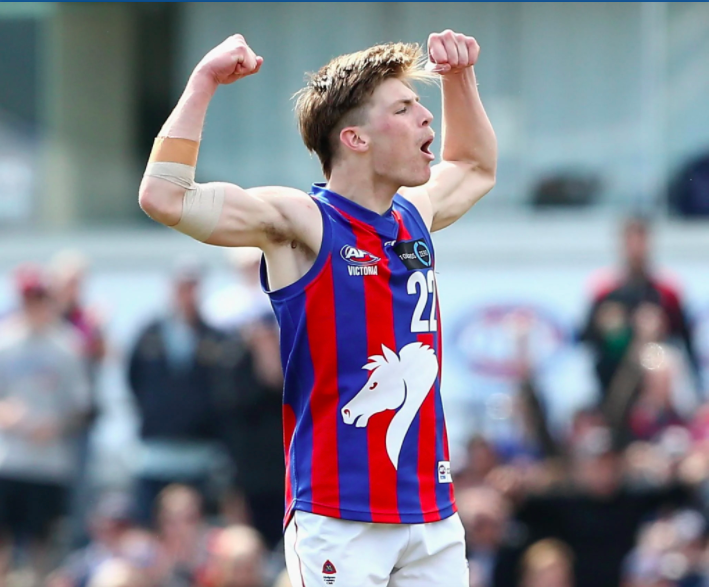 IF you are missing footy like we are, then let us somewhat salvage that with a look back in a new series of Classic Contests. In today’s contest we look at one of the would-have-been Round 13 clashes in the NAB League this year between the Northern Knights and Oakleigh Chargers. In this edition, we wind back the clock just one year to when the two sides met for a low-scoring thriller.

Two metropolitan sides would meet on neutral, country territory come Round 8 of last year’s NAB League season, as Northern and Oakleigh went to battle at Shepley Oval. The highly fancied Chargers had only just fought to an even 3-3 record to that point, snapping a three-game losing run upon the commencement of school football with a one-point win over Tasmania. Northern managed to retain most of its key talent, and had won two games on the trot after a lacklustre 0-5 start to its campaign.

While Oakleigh’s two co-captains in Dylan Williams and Trent Bianco took the field, the Chargers’ remaining four 2019 draftees – including top two pair Matt Rowell and Noah Anderson – were absent. Northern evened the ledger in terms of future AFL products with bolter Sam Philp a mainstay in the side, and 19-year-old Adelaide top-up Ayce Taylor also running out with plenty of interest.

As expected, Oakleigh arguably had the better of the opening exchanges, but could not quite capitalise on its territorial pressure as the sides entered the first break level at 1.2 apiece. The theme continued into the second term as both sides proved inaccurate in front of goal, but the Chargers’ superior two scoring shots saw them sneak ahead at half time by two points.

That was where the buck stopped for Northern, as it began to better take hold through midfield and apply scoreboard pressure in the process. A slender four-point lead at the final break was stolen back almost immediately by Williams in the following period of play, before Philp did the same for Northern. A second from Williams after Thomas Graham reclaimed the lead would prove the sealer for Oakleigh in a real scare, getting over the line by six points.

Williams’ move from half-back to his more comfortable forward role in the final term proved a game-winning decision, as the Port draftee booted two defining goals to see the Chargers home. Co-captain and new Collingwood recruit Bianco was kept relatively quiet for 17 disposals as bottom-ager Fraser Elliot led all comers with 28 touches, and partner-in-crime Lochlan Jenkins was named best-afield for his 22.

Philp returned a performance consistent of his form for the Knights throughout 2019, racking up 28 touches and booting an important goal in the losing effort. A player who very nearly joined him at Carlton, Ryan Sturgess was also influential with 19 disposals from defence, on top of having the difficult task of manning Williams at the death. Taylor was quiet with seven disposals but laid six tackles to display his versatility.

Northern would go on to finish sixth at 8-7 and disposed of Bendigo in Wildcard Round, but came undone against Western come finals time to see an end to its season. Oakleigh won the NAB League premiership from third, storming undefeated through a brilliant finals campaign which culminated in a 53-point triumph in the decider.