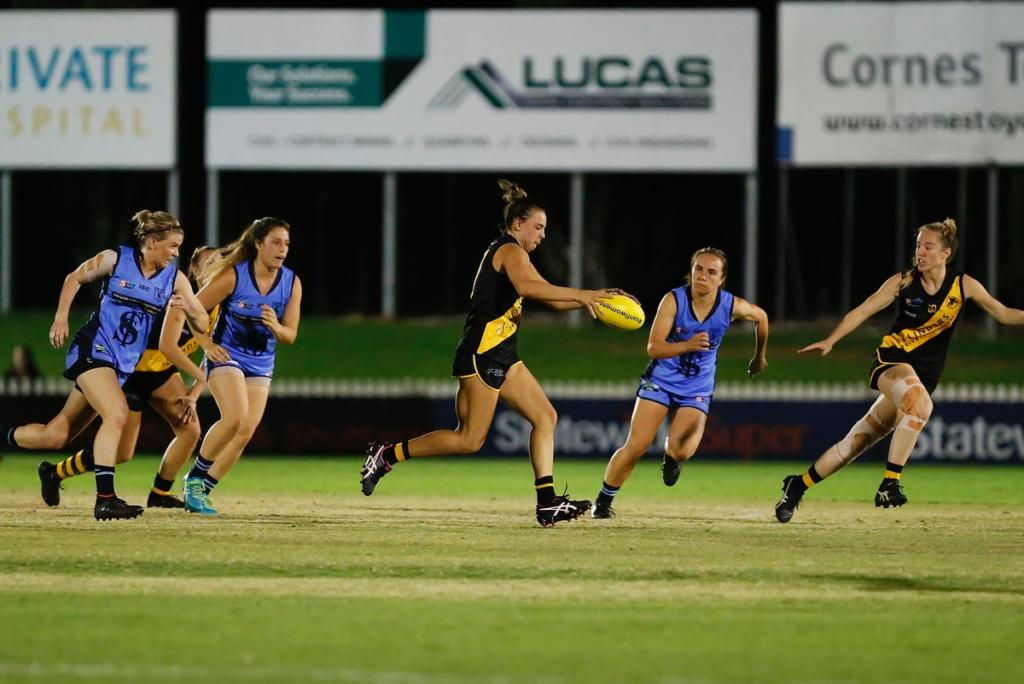 FOOTBALL is back in South Australia, but it is not just the return of the beloved game which will excite fans, but the fact the South Australian National Football League (SANFL) Women’s teams are going to be even stronger than before with a stack of AFL Women’s talent returning to the competition. We preview a huge round five of action which starts tomorrow morning.

The first game off the bat in the return of season 2020 is a clash between two sides that had the one win each prior to the break, but the Bulldogs’ victory came at Norwood’s expense back in Round 1. Since then Central had three consecutive losses, two by heavy margins, whilst the Redlegs won one and drew one to move up to fifth in a remarkably close competition after four rounds. With the draw in-hand, Norwood will move up to fourth on the table if they win and the undefeated North Adelaide take care of Sturt. For the Bulldogs, a win would certainly see them lift off the bottom, with both West Adelaide and South Adelaide starting favourites against their respective opponents, Woodville-West Torrens Eagles and Glenelg. At the very least, Central would leapfrog Norwood with a second win against them in this clash.

Last time these teams clashed, Central won by four points and Katelyn Rosenzweig proved a problem with three majors for the winners, whilst the Bulldogs tackled their way to victory with 56 tackles to 39. Their defence led them to victory with a plus seven differential in rebounds, whilst the Redlegs dominated most other stats, most notably the marks (plus 30) and the hitouts (plus 21). It was the accuracy in front of goal that let the reigning minor premiers down in the clash, and the Bulldogs made the most of their chances.

Fast forward to this match and the teams are welcoming back a couple of AFL Women’s talents. Sarah Allan comes in for the Bulldogs to provide some much needed experience to a team that whilst impressive defensively, is still young, and will aide young gun Kimberley Fry with support back there, freeing up Demi Sonneman to continue her ripping form of the past 18 months. The Redlegs bring back last year’s league best and fairest, Najwa Allen who provides the cream on top of a well rounded team that just had not gelled prior to the season. Her inclusion could spark a real revival for the Redlegs as they eye off yet another finals series.

With the VFL Women’s not going ahead in its traditional form, Matilda Zander remains in South Australia and will have more freedom with Allen back in the side, whilst Monique Hollick – who was yet to play a game this season – and Rhiannon Busch are among those to return to the team. Whilst the COVID-19 period might have been a terrible time for a lot of people, Gemma Doughty returns from an anterior cruciate ligament (ACL) injury she sustained last season, something the Bulldogs talent would never have been able to do if the season had run its course as expected.

The Redlegs will start favourites despite the Round 1 loss, with the key to try and limit Rosenzweig’s opportunities. For Central, they have to bring the heat like they did in Round 1, and if they can reduce the impact of Allen in the midfield whilst getting more opportunities up forward, then this is a huge chance to get off the bottom of the table.

League disposal records might be in threat when these teams take to the field tomorrow morning with ball magnet Anne Hatchard returning to an already ridiculously stacked Roosters outfit. North Adelaide has some unbelievable top-end experience, and they take on one of the youngest sides going around in Sturt. The Double Blues opted to not bring in any AFL Women’s players for the remainder of the SANFL Women’s season, and will focus on youth to round out 2020 – something that they have an abundance of this year.

When the competition abruptly ended, the Roosters sat on top of the table as the only undefeated team, having knocked off the other top three teams, as well as accounting for both Glenelg and Central District easily in the first two rounds. Sturt on the other hand had started slowly with losses against contenders, West Adelaide and South Adelaide before grinding out wins against Woodville-West Torrens Eagles and Central District.

The Roosters will be incredibly difficult to beat in this side, with Hatchard not being the only AFL Women’s inclusion for the side that was already dominant prior to the boosts. GWS GIANTS’ Britt Perry and West Coast’s Talia Radan both come into the side with Perry being a former Rooster before being drafted last year. She has been named at half-forward, with Radan named in defence alongside Kristi Harvey who was arguably the best state league defender in the competition. With Amber Ward and Lauren Gauci having more freedom to run the ball down the field with Radan’s inclusion, it will be difficult for most sides to try and stop them. In the forward half, Kelly Barltrop will benefit off even better disposal, whilst the likes of Cristie Castle and young star Hannah Ewings will cause havoc inside 50.

Sturt might not have the names fans know now, but they have the names fans will know in the future. Their list is stacked with some of the best young talent in the league, and led by former AFL Women’s talent Georgia Bevan, and a rising star in Maya Rigter. Prior to the break, Hannah Prenzler, Zoe Prowse and Isobel Kuiper were really stamping their authority on the competition, with Alex Ballard another young talent who has shown good signs. They have all the hallmarks of a great future side, but make no mistake this would take a mammoth upset to topple the experience that the other team has. But young teams play with no fear, and Sturt is certainly an exciting team to watch.

Prior to the COVID-19 lockdown, West Adelaide had shown some real promising signs in season 2020, with two wins and a draw in four rounds. They would have been disappointed to let slip against Norwood in Round 4, splitting the points instead of taking all two, but now take on a Woodville-West Torrens outfit who the Bloods should start strong favourites against. With favourable inclusions from an AFL Women’s perspective, West Adelaide has every chance of being a dark horse in the competition and you cannot put a line through them given the talent they have injected into the team.

West Adelaide have wasted no time welcoming back some former Bloods, with Chelsea Biddell having a huge 2019 season which resulted in her being drafted. She lines up back at centre half-forward, whilst bringing in 2019 AFL Women’s leading goalkicker Stevie-Lee Thompson to an already damaging forward line presents nightmares for opposition defences. Madison Newman and Rachelle Martin have also been named – but they played in the Round 4 draw so did not need to be inclusions.

The Eagles have welcomed back two AFL Women’s players in Renee Forth and Jess Sedunary from the Crows and Saints respectively. Forth slots onto a half-forward flank, whilst Sedunary has been named on the bench in a side that has also lost a lot of quality for this game. Both former AFLW talent Rhiannon Metcalfe, and current Crows young gun Jaimi Tabb are unavailable, out amongst seven changes to the Round 4 clash. That match was the club’s first ever win in competition, marking a special moment for the Eagles after so many close misses this season.

The Eagles were the number one tackling team in the competition prior to the lockdown, and if they can return as such then they will make every side earn their goals. They have Tesharna Maher and Kiana Lee as talents up either end, with the latter no doubt benefiting off the strength of the team being bolstered. The Bloods have their fair share of young talent too with first time watches expected to hear the names Zoe Venning and Keeley Kustermann a fair time over the next couple of years, whilst Kasia Culhane knows how to hit the scoreboard.

The combination of Biddell and Melanie Elsegood, along with Culhane, Venning and Thompson all inside 50 makes the West Adelaide forward 50 arguably the best in the competition. The Eagles have a strong defence that is built on pressure, but the back six will certainly get a work out if the Westies fire as expected. The underdogs will need to be at their best in order to stem the flow, and winning the midfield is crucial to getting on top of their opposition.

The final match of the round pits back-to-back premiers South Adelaide up against a Glenelg side that has struggled in the opening month of the season. The Panthers won three straight to open the season, before falling to the red-hot North Adelaide in the grand final replay back in Round 4. Glenelg managed to get one up over Central District in Round 3 thanks to the inclusion of Caitlin Gould who ran rampant and led her side to a huge win. Gould returns to her side, alongside one of the AFLW’s best players in Ebony Marinoff, but South Adelaide’s inclusions are also very good.

The Panthers welcome back Crows talent Nikki Gore and Western Bulldogs’ midfield Hannah Munyard who both slot into the side alongside other listed players Nicole Campbell and Czenya Cavouras who played in Round 4. They face off against a Tigers side that not only has Gould and Marinoff in the team, but also Deni Varnhagen and Eloise Jones to provide some serious X-factor around the ground. This game is shaping up to be the best of the round with so much top-end quality running around, allowing those who had already impressed prior to the break, to have more freedom in their games.

Last year Marinoff returned to the Tigers outfit in the last few rounds to guide Glenelg to a finals series, and whilst they fell short of the grand final-bound Roosters, she showed just how much of an impact she could have. She has been named in the forward pocket, but expect her to rotate with Jones who has been named onball and could easily kick multiple majors up forward. The Tigers should have no trouble generating opportunities, if the duo can get on top of the highly touted Panthers midfield. That is not to discount the likes of rising star Tessa Kohn and up and comer Sam Franson who were in good form prior to the break.

South Adelaide has won the past two flags for a reason, and whilst it would be understandable for them to drop back a peg after a host of their young guns were drafted last year, the Panthers had other ideas. They matched it with the undefeated Roosters and ticked off every other box after almost slipping up in Round 1 against the Eagles. That seemed to be a wake up call and they never looked back. Aside from their great talents of Gore, Cavouras, Campbell and Munyard through the middle who are proven at AFLW level, they also have two of the state’s brightest prospects. Teah Charlton and Indy Tahau are in the AFL Women’s National Academy, with Charlton the potential first pick for the state this year, whilst Tahau stepped up on the big stage to be best on ground in last year’s grand final. They can similarly not be underestimated by the Tigers.

The match is essentially a battle between the midfields. If the highly touted South Adelaide onball brigade get on top, then the Panthers have enough firepower to put a big score on the board. However if Glenelg can get on top, then watch out because Gould showed what she can do with delivery inside 50, and Marinoff and Jones will certainly offer that.