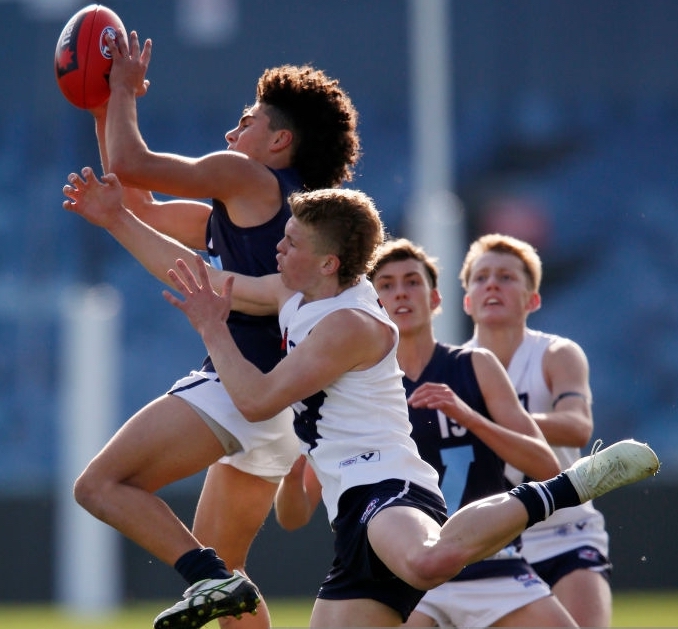 AS the postponement of all seasons commenced over the last few weeks, we head back to the pre-season where we sat down with a number of athletes across the country. In a special Question and Answer (Q&A) feature, Draft Central‘s Michael Alvaro chatted with Oakleigh Chargers’ Youseph Dib at the NAB League Fitness Testing Day hosted by Rookie Me.

There may not be much of the Collingwood Next Generation Academy (NGA) prospect at 172cm, but he is well-built for his size and makes up for it with tenacious two-way effort. After earning All Australian honours at last year’s Under 16 National Championships in a stacked Vic Metro side, Dib also managed to crack into the premiership-winning Oakleigh line-up for one outing late in the 2019 season.

While he is able to win his own ball and impact contests from as high as the wing or through midfield, Dib will more likely feature as a small forward for Oakleigh this year in between school football commitments with Caulfield Grammar. Read what the impressive bottom-ager had to say about his journey thus far and the year ahead in our latest Q&A.

>> CATCH UP ON ALL OUR FEATURES

MA: Youseph, how’s the day been for you so far?

YD: “Not too bad, it’s been a pretty long day. There’s a lot of boys out here, it’s good to see your competition and where everyone’s at. I’ve just got the yo-yo (test) left and then we’re good to go home.”

Is that one you’re looking forward to or dreading?

“Probably dreading. But one thing I’ve been working on in the off-season a lot is my fitness, so I’m excited to see where I’m at and see how I compare to before preseason.”

Coming off a really good Under 16 campaign, how did you enjoy the carnival up in Queensland?

“Yes, a good experience. I felt like the difference between our year and maybe some others was that our (group) really jelled well together. We had a really broad range of talent and as soon as we got on the ground, it didn’t take long for us to know each other. We just connected well and our chemistry was up there.”

There were plenty of fellow Oakleigh boys as well, did that make the connection easier?

“Definitely. We had about 10 or 11 there and I’ve been training with them for the last few months. But I also felt like we were leaders there and helped some of the other boys who didn’t have too many (others) from their regions. After a couple of training sessions everyone was all mixed together between regions which was one of the reasons why our chemistry was so high.”

Given you can go and win your own ball, which position do you see yourself fitting in best at Oakleigh now?

“I’ve been working a lot in the forward (group), so a small forward around some of the talls. I’m hoping to play a bit of midfield, a bit of wing. Playing up and down the ground and working on my fitness so I can be a bit more broad.”

You’d have some great mentors as part of the Collingwood Next Generation Academy, how has that been for your development?

“It’s been very good. Reef McInnes, who’s a year older than me as well, when I first came in I was pretty quiet and didn’t really know anyone and he really brought me in. Every training session he gets around all the younger boys with the new (Under) 15s coming in, he’s a very good leader. With ‘Daics’ (Nick Daicos) and Reef training at Oakleigh as well, it helps because we know each other so well… the NGA training has been pretty high-intensity which has been brought up a lot this year.”

What kind of goals are you looking to set out this year?

“Most of my year will be played out at school footy which I haven’t really done before, so I’m excited to see what the competition is like there and hopefully I can bring up my stats and fill out my role in the team. It’ll be a pretty long year (with) a lot of small goals, but my main goal from the off-season was my fitness. I’m excited to see what I’m like on the ground and where I’m at.”