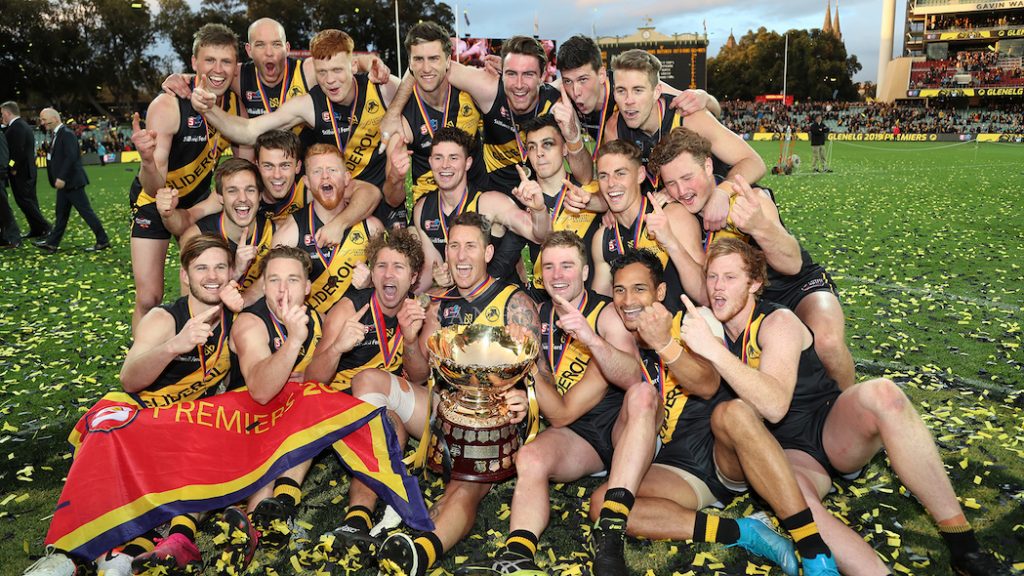 LAST year saw a drought-breaking year in the South Australian National Football League (SANFL) with Glenelg taking home its first League premiership since 1986. The Tigers were able to bounce back from a loss earlier in the finals series to take out Port Adelaide in the grand final last year. The result also meant seven of the eight non-AFL affiliated clubs have won SANFL titles this turn of the century with only South Adelaide (1964) holding a drought longer than a decade from those sides. We take a look at the eight sides in contention for the 2020 SANFL premiership in order of ladder position last year (minus Adelaide and Port Adelaide).

The reigning premiers return to the competition as deserving favourites in the new year, as the likes of Margarey Medallist Luke Partington and reigning leading goalkickers, Liam McBean and Luke Reynolds back in the yellow and black.

Over the off-season, the Bays have been able to bring in some young talent including former Crow Jackson Edwards who returns to South Australia, ex-Sydney Academy talent Luke Parks, and Greater Western Victoria (GWV) Rebels forward, Mitch Martin. Unfortunately young star Kaine Baldwin will miss the season through another anterior cruciate ligament (ACL) injury. However, the Tigers have every reason to be buoyant about the season ahead.

After all, their list of ex-AFL talent is quite impressive, with names such as Cory Gregson and Billy Stretch alongside Luke Edwards. Expect the Tigers to be the team to beat in 2020.

The Double Blues will be confident of a rise up the ladder in 2020 with a couple of handy pickups including talented high-flyer Jordan Houlahan who returns from the AFL, as well as another ex-Cat and Crow, Dean Gore.

Tom Lewis will provide some extra youth and inside hardness alongside the likes of outside movers, Josh Shute and Mihail Lochowiak who have been impressive in past years. Sam Colquhoun has been a star of the competition of late, and with last year’s leading goalkicker Josh Hone also coming back for 2020, Sturt will be competitive once again.

They have a lost a fair chunk of talent over the off-season including ex-AFL talent Danyle Pearce who opted to retire alongside four others including Jack Stephens and Fraser Evans. The Double Blues will likely need to time to adjust in the season.

The experience of the Redlegs after a grand final appearance the year before did not end up helping them get past the first week of finals in 2019. They have some serious big names on their list from best and fairest winner Brad McKenzie, to the likes of form AFL-listed talents Dom Barry, Lewis Johnston and Mitch Grigg.

A 2020 recruit in Daniel Johnston will help add some extra height to the side, and provide some firepower alongside the likes of Matthew Panos and Peter Bampton up forward. The biggest inclusion is former Crow, Richard Douglas, who should immediately be in the top five players across the league, whilst another ex-AFL talent in Ryan Bastinac announced yesterday that he would be joining the Redlegs after initially pulling out of the league due to commitments.

If the inclusions are anything to go by, Norwood will be the biggest threat to Glenelg’s crown and could well go all the way if their players remain fit throughout the season.

All eyes will be on the Panthers in season 2020 as they try and crack into the top four on the back of some savvy recruiting. Former AFL talent, Matthew Broadbent will help South Adelaide to try and mount a case to rise up the ladder.

Along with the experienced duo, Canberra’s Tom Highmore and Sydney Swans Academy’s Ky McGrath were both vying for draft selection last year, and will be among those looking to take over from a number of Double Blues stars who have left the club. With Brad Crabb and Nick Liddle both exiting, Mark Noble joining his brother in Victoria and Emmanuel Ira also on the out, the main role of the recruits will be to support Joel Cross with some extra depth through the team.

Cross won both the leading goalkicker and best and fairest award last season, and with a young side that has a number of South Australians coming through the state team, the Panthers would be keen to bring through their next crop of players.

The Under 18s premiers have now lost their array of young talent to the AFL, with the likes of Kysaiah Pickett, Jackson Mead and Harry Schoenberg among those who landed on AFL lists last year. They have brought in Kai Pudney and Mitch Mead from Port Adelaide’s SANFL side, whilst the big recruit might be Liam Buxton from Casey Demons.

It will be an interesting season for the Eagles who have some genuine elite talents through the side, including best and fairest winner Jordan Foote – an ex-AFL talent himself – and small forward James Rowe who made the transition to senior footy seamlessly.

They should be among the mid-table log-jam of teams to battle for a top four place, and with the senior experience still on the list after a seventh placed finish last year, they could well get it done whilst other teams are still trying to gel.

One of the potential bigger improvers in season 2020, Central District has acquired the services of a second Menzel brother with Dan joining Troy at the Bulldogs. Troy was huge last season winning the leading goalkicker award and now the double trouble of the goalsneaks will make life difficult for the opposition. The big question mark will be losing the Neagle trio in Jydon, Jaxon and Matthew back to Wodonga.

Through the midfield, the other brother combination in Jarrod and Travis Schiller will be tough to combat again, whilst former Tiger, Ben Nason has crossed from Woodville-West Torrens. The Bulldogs have also brought in some big ball winners from Victoria, with Murray Bushrangers’ Cam Wild and Dandenong Stingrays’ Jack Toner joining the club along with former Stingrays’ goalsneak Jai Nanscawen for the 2020 season.

Given the talent on the list and two less sides, it would be a near-certainty that the Bulldogs reach the finals.

The ninth placed Roosters have added some extra firepower in 2020 with the recruitment of former Adelaide and Gold Coast ball-winner Harrison Wigg and ex-Hawk and Roo, Billy Hartung. Along with another ex-AFL player in Andrew Moore, and hopefully a full season out of former Port Adelaide goalsneak Jake Neade, and the Roosters will look to rise up the ladder again.

Last year’s reigning premiers were always going to have a tough season after starting on negative points due to the 19th man saga, and losing a number of players to AFL level. They have gained one back in Robbie Young returning to the club. Unlucky overagers not to be drafted last year, Karl Finlay and Dyson Hilder are back again and provide some height in the defensive end.

The recruits will need to take over from Aidan Tropiano who has headed west this season. The Roosters will rise up and expect them to contend for finals again.

The only way is up for the Bloods and with a number of solid recruits alongside the potential number one AFL Draft pick, West Adelaide has what it takes to get off the bottom of the ladder. Riley Thilthorpe will be a much talked about name this year and the talented tall will get plenty of time in the League side in 2020.

The Bloods have also recruited a couple of over-agers and former Sydney Swans Academy members Hamish Ellem and Kyle Martin to provide some strength in attack. With Bailey Chamberlain another talented top-age teenager in the line-up, it will take some of the pressure off the likes of 2019 best and fairest winner, Logan Hill, as well as ex-Hawk Dallas Willsmore.

No doubt it will still be a tough year for the senior side with so many huge recruits to a number of other sides, but the youth in the team will give the Bloods great depth and help out across the board. They will need to overcome the losses of Jono Beech and Chris Schmidt this season who were both huge contributors to the team.