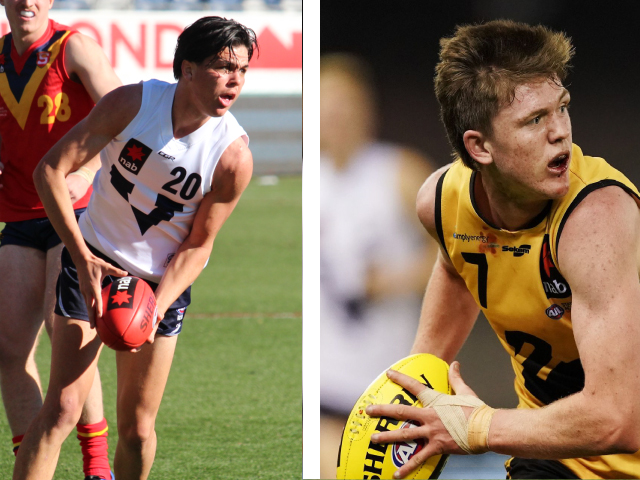 The pair next under the microscope – Murray’s Elijah Hollands and Perth’s Nathan O’Driscoll – have already gone head-to-head, matching up in representative action at Under 16 and Under 18 level, while also playing on opposing sides during last year’s Under 17 Futures All Star fixture. Both are among their state’s leading draft prospects for 2020, with Hollands in the conversation for number one pick honours before suffering a season-ending knee injury, while O’Driscoll has the all-round game to push for first round selection.

Hollands, who was one of the few bottom-agers to feature in all four national carnival opportunities, last year also cracked the Bushrangers’ Under 18 side as a 16-year-old. He played three times in 2018 and backed it up with another four outings in 2019, averaging nearly 17 disposals and over a goal per game in the NAB League in between his school football commitments with Caulfield Grammar. Having already graduated from school, Hollands was primed to feature full-time for Murray in his usual midfield/forward role, hoping to showcase his match-winning abilities.

O’Driscoll was another bottom-aged prospect to make an early break into the Under 18 state squad, running out three times for the Black Ducks across last year’s carnival. Playing mostly as a running half-back/wingman, the Perth product averaged 16 disposals and 6.7 tackles as he adjusted seamlessly to the step-up in competition. O’Driscoll was also a mainstay in the Demons’ Colts side, averaging over 25 disposals in his seven appearances in more of a midfield-oriented role. Both he and Hollands were set to see more midfield minutes in 2020, but could well have also met in a half-back/half-forward duel in this year’s National Championships.

Obviously these results are essentially incomparable given all of Hollands’ scores come from his bottom-aged preseason, but O’Driscoll’s efforts from earlier this year give a good insight into his overall athletic package. Both are powerful and well-built athletes, with O’Driscoll proving as much in his near-elite results across the board; posting terrific running vertical jump scores, a sub-three-second 20-metre sprint, very serviceable agility time of 8.46 seconds, and a high-end yo-yo test score of 21.8.

O’Driscoll’s rare combination of speed and endurance is exactly what AFL recruiters yearn for, while his explosive capabilities prove he is well equipped to keep up with the speed and rigours of senior football. While his 2019 results may not speak to it as such, Hollands is not lost on the same attributes, boasting a similarly high-level speed and endurance base. His vertical jumping results are entirely unflattering and thus far from indicative of how he plays. Hollands would arguably feature right up there with O’Driscoll at this point in time if not for his knee injury, but that remains to be seen.

The slight differences in roles across these two prospects are evident in their 2019 statistics, with O’Driscoll showing a higher output in terms of disposals and tackles, while Hollands has the edge in forward 50 penetration and scoreboard impact. It is much easier to find the ball across half-back, but O’Driscoll is exceptional at it with his contested work and intercept marking abilities, while also being able to showcase his ball winning prowess with a touch more midfield time than Hollands – particularly at WAFL Colts level.

In a much more forward or outside oriented role, Hollands managed to find space well and work almost as a centre half-forward at times with his marking strength. His two-way work rate is also evident in his tackling numbers, while that all-important ability to find the goals shines through across all levels. Hollands may see less of the ball, but creates high-impact plays forward of centre. That is not to say O’Driscoll cannot do the same, with his kick penetration particularly damaging on the rebound.

Our chosen game for both players may seem odd given they returned outings with more disposals or goals respectively, but we feel these were their most balanced performances.

Hollands began his 2019 season strongly against good opposition and while his 1.3 may have proven costly in a three-point loss to Gippsland, he was dangerous as ever. The Bushrangers’ 15 disposals were thereabouts with his career average across all levels, but his impact came in his ability to provide an aerial presence (10 marks) and cover the ground well from half-forward with four inside 50s, while also heading back towards goal effectively to put four scores on the board.

O’Driscoll’s chosen game stood out despite having cracked the 30-disposal mark in a seperate outing, and had another level of value given it came in a winning effort. This was a monster performance from the Demons gun, picking up 28 disposals from midfield and pumping the ball forward relentlessly with 10 inside 50s, while remaining relevant around the ground with seven marks, and on the defensive side with 12 tackles. All of O’Driscoll’s damaging traits and work rate were on show in this fixture, and may be a pointer of what’s to come should he be let off the chain through the engine room more often.

This was of course the game made famous by Regan Clarke‘s match-winning goal for the Black Ducks, and Hayden Young‘s elite switching kick which put him on the map (if he wasn’t there already). Employed off half-back, O’Driscoll arguably fared the better of the two, showing great dash on the outside and delivering the ball forward with aplomb. Hollands, who was manned at times by Denver Grainger-Barras, still managed to make a menace of himself up forward with a touch more ground level play, but failed to find the big sticks in this outing.

It will be difficult to adjust these strengths for Hollands across the year despite being billed for more time in a different role, but O’Driscoll’s four traits listed below translate well across both his half-back and midfield assignments. While Hollands’ overhead marking and scoreboard impact hint at a very forward-oriented mindset, he is just as capable as O’Driscoll on the defensive end when need be, with the mix of speed and smarts from both players aiding such efforts.

Hollands’ athleticism and strong build bode for more time in the engine room, and O’Driscoll has arguably better proven his worth in said position with his ability to hunt the ball and really burst away from stoppages. Hollands thrives on being able to position well and outclass his direct opponents, while O’Driscoll uses the same attribute when stationed in defence to intercept aerially. Hollands is more of an attacking threat in that sense, using his clean hands to burrow through at ground level, while also marking in dangerous areas.

Both players are also great kicks of the ball and while Hollands can sure up his kicking for goal at times, is usually a sure bet in terms of length and accuracy. O’Driscoll’s pins are absolute weapons in terms of penetrative ability, and make him a two-way asset in any position.

Part of Hollands’ improvements are listed by no fault of his own, with the question of durability and endurance often attributed to those who suffer severe knee injuries. A preseason at the elite level should cover that issue, with his work-rate and professionalism usually no issue. In terms of moving seamlessly into a more permanent midfield role, he’ll need to up his numbers and find the ball more consistently. O’Driscoll is a difficult one to list improvements for given his well-roundedness both athletically and skills-wise, but finding a balance in his short and long-range kicking options will be key to his effectiveness going forward. He sometimes blasts the ball forward from midfield, but is such a great target-finder when allowed more time.

It was a very near-complete performance from the Team Brown captain, who booted two classy goals in his time between the midfield and forward line. His work rate in the engine room was top notch, digging in to win the ball himself and tackling hard going the other way with the opposition breaking.

Hollands also impacted the centre bounces from his starting position on the wing early on, proving clean and composed when the footy was hot. His first goal was a typical one, propping after he collected the loose ball and snapping home. The second was a show-stopper, slamming the ball through the big sticks from 55m out off a couple of steps. Is one of the leading prospects at this early stage, and narrowly missed out on best afield honours.

Spread well to win the ball in all thirds of the ground and found plenty of it, particularly early. He took a strong mark at half-forward in the first term and then won a lot of his touches at half-back as the game turned against his side. He would play the defensive side of the wing to mop up and kick long, providing a release option for his side going forward.