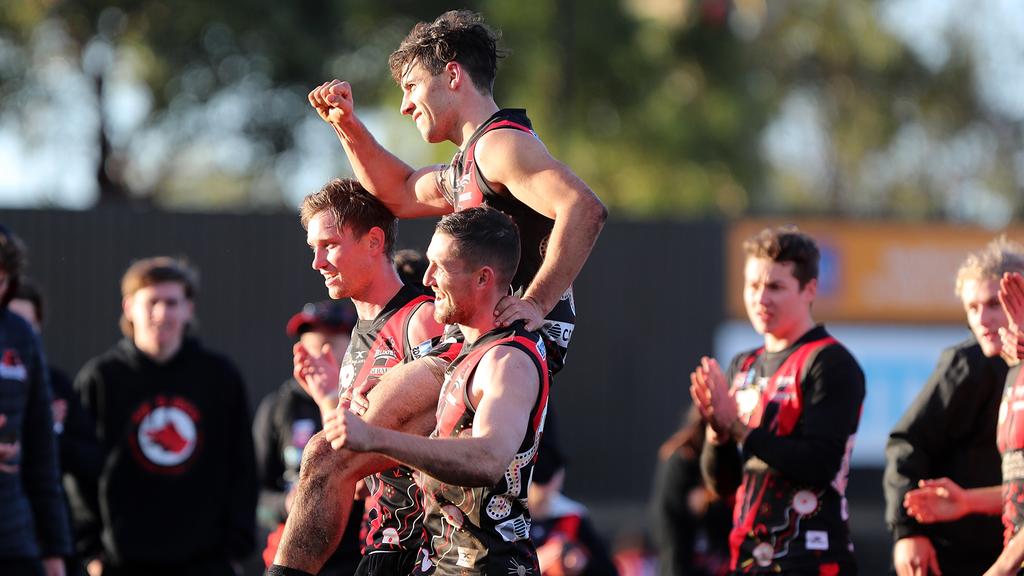 AFTER a tough 2019 season where injuries and the mid-season losses of John Noble and Will Snelling hampered their campaign, the West Adelaide Bloods will look to scrape themselves off the bottom of the SANFL ladder as state football returns. The road to redemption begins against last year’s ninth-placed side, North Adelaide, a team which Westies picked up one of their two wins against in 2019.

The Bloods have certainly been busy during the off-season, bringing in over 10 fresh faces to the squad in hopes of gaining a big performance boost. While the likes of 2019 leading goalkicker Jono Beech and former skipper Chris Schmidt are significant losses, West Adelaide has managed to hold onto a decent core of its rebuilding list and had most of its turned-over players head either interstate or into retirement – not into the hands of rival clubs.

The incoming crowd have come in bunches from right around the country, with young St Albans pair Matthew McKenzie and Hayden Elliot crossing over from Victoria for a taste of state league football, while graduates of the Sydney Swans and GWS GIANTS Academies will also make the transition to South Australia. Of them, Hamish Ellem is a well-built key forward who competes at ground level, joined by sharp-kicking half-back Kyle Martin out of the Swans’ system, while athletic midfielder Lachlan Squire crosses from the GIANTS’ ranks.

Pace and squad depth were also on the agenda come recruiting season, with Josh Koster and Sam Davidson completing transfers from Glenelg and Port Adelaide respectively, providing great running power alongside Jordon Boyle (Adelaide) and Ed Allan (Sturt). Stuart Tavener was a best and fairest winner at local level with Plympton last year, and boosts the ruck stocks at 202cm as somewhat of a late bloomer. Capping of the recruits is another expansive get, with Domonic Grant making the move from NT Thunder.

Much of the leadership responsibilities will again fall on captain Tom Keough and last year’s club champion Logan Hill, with young talents like Elliot Dunkin and Dallas Willsmore continually improving and 13 Under 18 products training with the senior side. Consistent figure Kaine Stevens is again set be a factor, forced to shoulder much of the heavy lifting through the engine room given the Bloods’ losses in that position.

A last-place League finish in 2019 means the only way is up for West Adelaide, with a run of five-straight losses to end the year a big chance of being snapped right off the bat. At Reserves level, improving on seventh spot should also be a realistic goal, with finals football not far off if both sides can showcase cohesion early and follow the example of its notable leaders. Watch for some exciting talent to emerge, and expect some big improvement from the Bloods.

Contrary to the form shown by their senior teammates, West Adelaide’s Under 18 prospects finished second in 2019 with a 12-6 record and on the back of seven wins in their last eight regular season outings. The Bloods’ finals campaign did not quite go to plan as they exited in straight sets to each of the eventual grand finalists, but having a first round draftee (Will Day, Hawthorn) come out of the system would have been exciting.

The junior side may ironically suffer from the high-end talent it boasts, with top 2020 draft prospect Riley Thilthorpe already a figure in the League side, while fellow State Academy hub members Bailey Chamberlain and Jye Sinderberry cracked the Reserves grade as bottom-agers. Thilthorpe is a dynamic ruck/key forward who dominates aerially and covers the ground like a midfielder, while Chamberlain is a lightning-quick midfielder, and Sinderberry a dour defensive type who can play above his size.

Elsewhere, Harvey Bock is a prospect outside of the current academy bubble who may get a look-in, while Under 16 captain Tyson Coe and fellow standout Kobe Ryan have all the talent to make the step-up to Under 18 level this year.