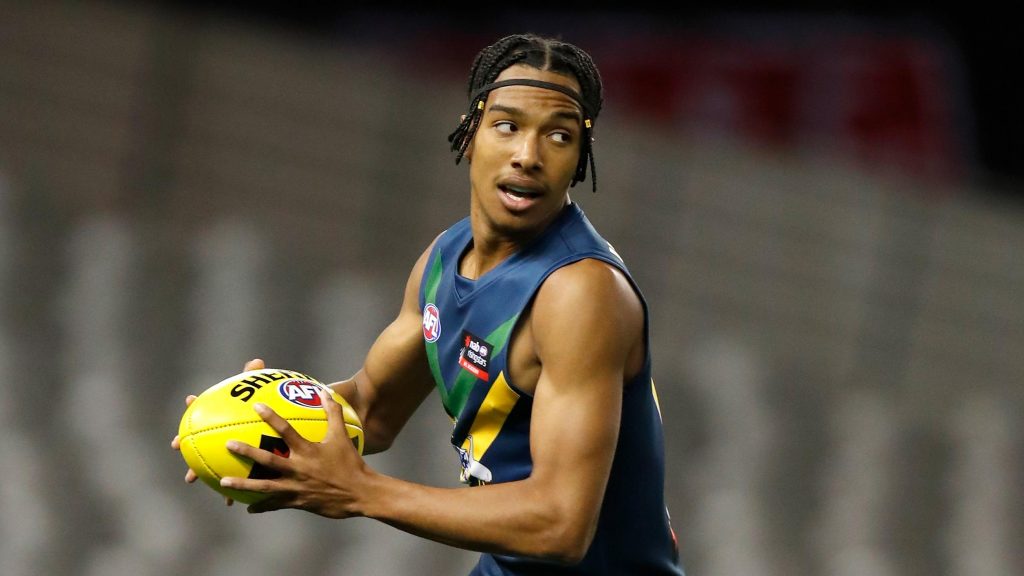 Next under the microscope in our AFL Draft watch is East Fremantle prospect Brandon Walker, who is part of Fremantle’s booming Next Generation Academy (NGA) alongside twin brother, Chris. The classy, rebounding half-back has already impressed with his line-breaking speed, astute disposal, and vertical leap when intercepting from defensive 50. After earning All Australian honours at Under 16 level, Walker was a standout for Australia in its annual Under 17 fixture against New Zealand, and went on to become a mainstay for East Fremantle’s WAFL Colts outfit as a bottom-ager.

This year, the 184cm prospect will be looking to break into the West Australian Under 18 starting side having been named in the 2019 squad, while also resuming his climb up the WAFL ranks. He managed the second-best running vertical jump off the left side (94cm) across the nation during preseason, and is sure to showcase much more than just his incredible athleticism once the on-field action returns.

DNT – Did not test

WAFL Colts Round 15 vs. Peel Thunder

The 2018 AFL U16s All-Australian defender showed why he is so highly touted for the 2020 AFL Draft with another polished performance. He accumulated 11 possessions, grabbed three marks and laid two tackles, while he also provided a heap of run from the defensive half.

WAFL Colts Round 14 vs. Swan Districts

The 2018 AFL Under 16s All-Australian member increased his draft stocks for 2020 with another superb performance. Against Swan Districts, Walker accumulated 16 possessions, took four marks and laid two tackles, playing primarily across the half-back line. His line-breaking capabilities, decision-making and disposal efficiency are all at a fantastic level for someone his age. He is a part of Fremantle’s Next Generation Academy.

WAFL Colts Round 8 vs. South Fremantle

The 2018 AFL U16 All-Australian showed why he is already being touted as a possible first round draft pick in next year’s AFL Draft. Against the Bulldogs, Walker gathered 21 possessions, recorded five inside 50s, took four marks and laid four tackles to be one of the best players.

WAFL Colts Round 2 vs. Subiaco

The Fremantle Next-Generation Academy prospect was sizzling off the half-back line for East Fremantle. He finished with 15 possessions and five marks, showcasing the traits that made him an All-Australian last year. He used his speed to burn off opponents, was smart with his decision-making and elite with his foot skills.

WAFL Colts Round 1 vs. Claremont

The 2018 WA U16s All-Australian was excellent for the Sharks, showing why he is so highly rated for the 2020 AFL Draft. He used his crisp disposal and electrifying speed from the half-back line to torch the Tigers. He finished with 11 possessions, five marks and three tackles.