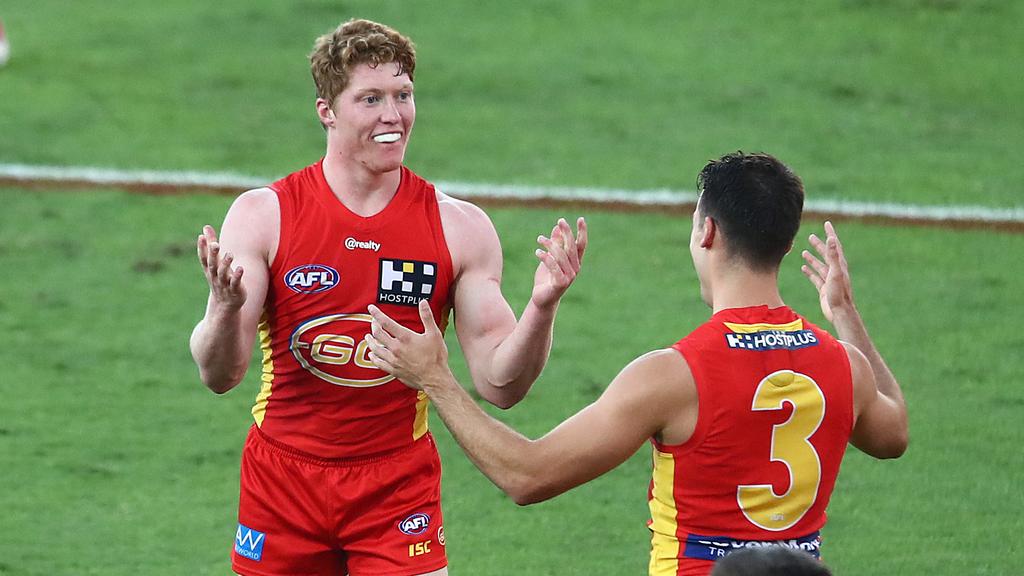 SIX draftees from the 2019 AFL National Draft ran out for their respective teams on the weekend, and we take a look at how they performed. From a Gold Coast trio who continue to flourish, to a number of other high picks who earned their spots, the draft class of 2019 is already showing promising signs for the future. Lachlan Ash was the sole debutant of his cohort in Round 3, with each player holding their spot while chances for Melbourne and Essendon newcomers have been postponed.

STAR OF THE ROUND: Matt Rowell (Gold Coast)

It is very, very difficult to avoid Rowell’s name as the standout for a second week running, and he is proving to those who had not previously caught a glimpse of his game that he rarely has a bad one. Another 20 disposals and two goals were among the highlights for the number one pick, spending over 80 per cent of the match on-field and right amongst the engine room action.

Rowell is simply unstoppable at the contest, perennially the first to the fall of the ball and relevant going both ways, with a massive 10 tackles to go with his ball winning exploits. His left-footed goal on the run had us thinking of his 60-metre bomb in the NAB League Grand Final last year, and the kid can simply do it all.

None of it is by chance either, as the 180cm wunderkind sets the standard for work rate both on and off the field, and his professionalism is conveyed in the most perfect form – with a simple tuck of the jumper. It is no surprise from our point of view to see Rowell hitting the ground running, but he has gone the extra mile in playing a big role in Gold Coast’s incredible momentum shift and consecutive wins upon the season’s restart.

The SUNS Academy product has looked increasingly comfortable across each of his first three AFL outings, culminating in a strong 16-disposal effort towards his side’s second win on the trot. A versatile and clever small, Budarick reads the play incredibly well and used his smarts in that sense across the defensive line, working hard to intercept Adelaide’s forward 50 entries and faring well in one-on-one contests. His disposal and movement up the ground were also assured, and he even broke through for his maiden goal at the elite level.

While he was a touch quieter in his third senior appearance, Anderson played a solid game among a team of even contributors. The number two pick was utilised mostly on the outside, finding most of his touches forward of the wing with a good mix of contested and uncontested involvements. Alongside best mate and junior teammate Rowell, the 191cm jet has slotted straight into the SUNS lineup and looks poised to remain in the winning side.

It has been a tough start to life in the AFL for McAsey given Adelaide’s downfalls, but the Crows picked him for a reason among the top 10 and have shown great faith in the promising key defender. Like many others, he is beginning to look a touch more comfortable at the level with time, and battles against some pretty stiff opposition at this point will bode well for his future. While he is still honing his defensive craft and bodywork, McAsey was relatively calm on the ball in the face of Gold Coast’s pressure.

Young is still growing to the rigours of the next level after being able to impose himself previously and generate incredibly penetrative plays off half-back, with a touch more defensive work required in his current role at Fremantle. Still, the highly-touted top 10 pick was able to feature much further afield in this outing after a first half played out of his usual post, and he spent just over 65 per cent of his time on-ground.

It was somewhat of a baptism of fire for Ash as the GIANTS and Bulldogs went to war in a heated affair, with the classy operator utilised in his most comfortable half-back role. The number four pick could not quite generate the same dash, dare, and penetration we came accustomed to seeing at the junior level, but he was quite sound on the ball across the backline. In a typically tough side to crack, Ash could see more opportunity given injuries are again taking a toll on GWS, with his versatility freeing others up to play up the ground.