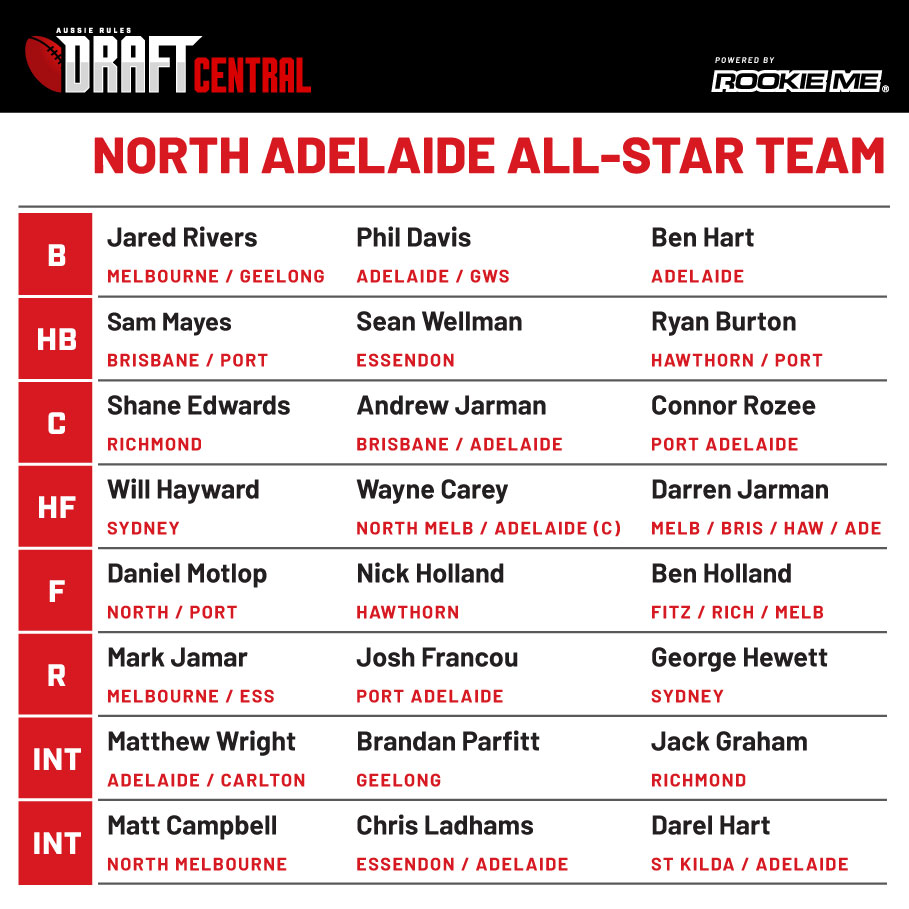 NORTH Adelaide Roosters have some elite players in their All-Star team of the AFL Draft era led by captain Wayne Carey who was the clear standout during the All-Star voting.

This balanced Roosters side has a number of well-established modern-day players mixing with a strong tier of up-and-coming future stars, supplemented by a handful of the greats of yesteryear. The likes of Jarman and Hart are household names at Prospect but a couple of young, talented former Roosters are hoping to make a name for themselves in the AFL, too. Having moved to Victoria prior to being drafted, Melbourne midfielder Jack Viney was excluded from consideration.

Current GWS Giants captain Phil Davis anchors the backline of the Roosters “best side of the AFL era”. Davis has been one of the competition’s premier key defenders for over a decade, leading the Giants to their first Grand Final appearance in 2019. In the back-pocket is former-Demon and Cat Jared Rivers, who played 194 games at AFL level as a serviceable defender. Premiership Crow and AFL Hall of Famer Ben Hart is one of the genuine stars of this Roosters side. A Crows club legend, Hart played 311 games in the tri-colours, winning two best and fairest awards and being named an All-Australian on four occasions.

Sean Wellman was an obvious inclusion for the role at centre-half-back, having appeared in 212 AFL matches, originally with Adelaide and later Essendon. A member of the ‘Dons 2000 premiership side, Wellman was a dual All-Australian. Although both still competing at AFL level, Power duo Sam Mayes and Ryan Burton have shown glimpses of their high potential in their 101 and 63 games respectively.

Roosters and Crows great Andrew Jarman made his debut at SANFL level in the red and white at just 17 years of age, before going on to kick 92 goals in 110 games with the Crows. Centreman in the Crows team of the decade, Jarman was renowned for his lighting hands in tight and amassed 47 Brownlow votes during his time in the AFL. Dual Premiership Tiger Shane Edwards has rather-quietly racked up 255 games and 161 goals with Richmond. A vital cog in the Tigers recent successes, Edwards was named an All-Australian in 2018 and fits in on the wing of the Roosters side. Although just one year into his career, Connor Rozee is destined for stardom and slots in on the wing for North Adelaide. Runner-up to Sam Walsh for the 2019 Rising Star, Rozee is silky smooth, lightning fast and appears set to be one of the games best outside players in the coming seasons.

Mark Jamar was a regulation choice as the lead ruckman for North Adelaide, having played 160 AFL games, 155 of which came during his time with Melbourne. Despite the Demons struggles and a series of injury set-backs, Jamar was regarded as one of the league’s best ruckman and was named an All-Australian in 2010. Former-Power star Josh Francou has been named as a follower. A 156-gamer, three-time Showdown Medalist and inaugural member of the Power, Francou hit his peak in the early 2000s, finishing third and second in the 2001 and 2002 Brownlow Medal counts. Tough, contested-ball winning Swan George Hewett caps off a battle-hardened yet skilful on-ball unit for the red and white. Hewett is one of the most reliable negators in the competition, as shown by his second-placed finish in the clubs 2019 best and fairest count.

Regarded as one of the greatest to ever play the game, Carey is without doubt the star of this side. A dominating centre-half-forward, Carey played junior and reserves grade football with the Roosters before moving to North Melbourne and than the Crows. He kicked 727 goals in 272 games and collected 127 Brownlow votes. The Wagga product was a seven-time All-Australian, four-time best and fairest winner and two-time premiership player with the Kangaroos in the mid-to-late 90s. Swans forward Will Hayward has shown plenty of promise in his 53 AFL games and he gains selection on the half-forward flank. Darren Jarman joins his brother in the Roosters side. Jarman is a South Australian footballing icon, best known for his miraculous goal sense and for almost single-handedly dragging the Crows over the line by kicking five goals in the 1998 Grand Final. He kicked 386 goals in 230 games, 109 of which came with Hawthorn. Along with his three premierships and a best and fairest, Jarman was also a three-time All-Australian. Daniel Motlop adds serious x-factor to a forward line already oozing with talent. Ben Holland and his brother Nick complete the starting attack. Both were dangerous talls in their prime, kicking 179 and 239 goals respectively.

Former-Crow Matthew Wright headlines the interchange options. A serviceable, nuggety small forward or rotating midfielder, Wright kicked 136 goals in 94 games with the Crows and 65 with the Blues. Brandan Parfitt has turned some heads in his first few seasons in the AFL with Geelong. Albeit difficult to break into a star-studded Geelong midfield, Parfitt has shown glimpses of his talent in 54 games. Jack Graham has played 39 games with Richmond and was a key contributor to the Tigers 2017 premiership victory. Pocket-rocket Matt Campbell offers an injection of speed and versatility off the bench. Chris Ladhams and Darel Hart also made the final cut.