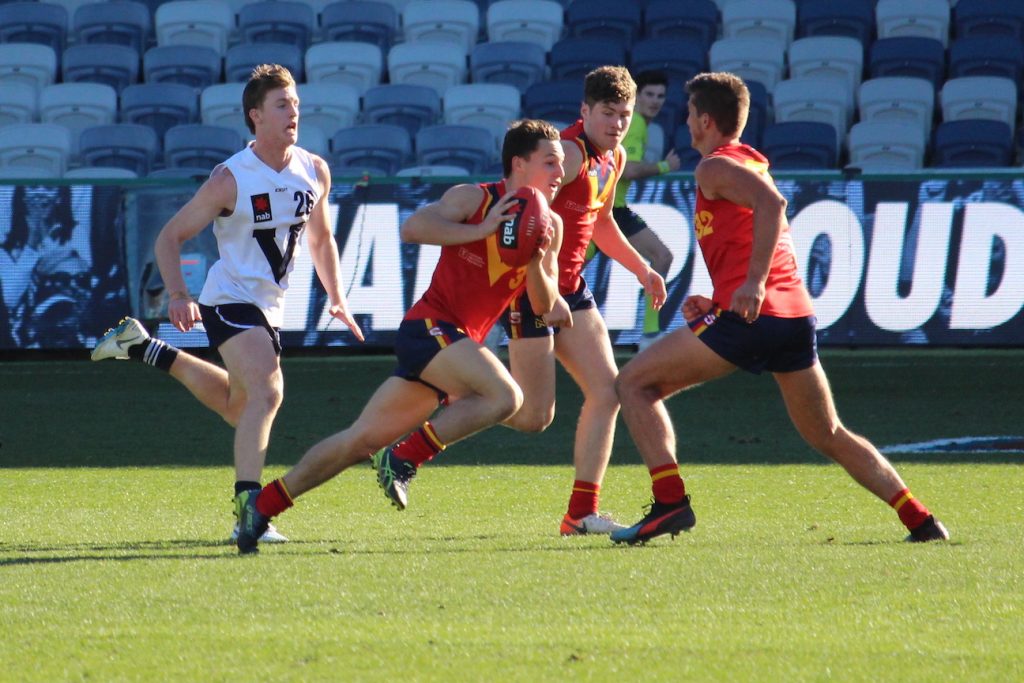 Next under the microscope in our AFL Draft watch is Central District product Corey Durdin, a diminutive midfielder/forward with plenty of quality. The 172cm prospect has already cracked SANFL League level, and ran out for three of South Australia’s Under 18 National Championship games last year as a bottom-ager. While his class as an inside midfielder is evident against opponents of his own age – see his SANFL Under 18 and State Under 16 form – Durdin is poised to make an impact at the next level as a zippy small forward with great ground level presence and goal sense.

The pocket rocket had some highlight plays to suggest he can be a damaging player when he is on, and generally used it pretty well despite not racking up a heap of it. He has that great burst of speed that can burn off opponents and showed it early running down the middle but unfortunately only had a one-on-three option to kick to, which he did pretty well to put it to his teammate’s advantage to at least nullify the contest.

He almost kicked a dribbler goal late in the first term but just missed, then made up for it with a great outside-of-the-boot goal two minutes into the second term. Was quieter in the second half as Team Brown controlled possession in the front half, but the forward still had a lovely straight kick down the middle, and had a scoring chance in the final term but it hit the woodwork.

Under 18 National Championships vs. Allies

Was by no means a big game from the bottom-ager in terms of his disposal output (just seven), but he continues to show little bursts of form in a forward role. There isn’t much of him at 173cm, but Durdin cracks in against bigger bodies and tackles hard – boding well for his inside midfield craft. He showed his class with a snapped goal from a forward stoppage in the first quarter, and caught the eye with a clean pick up and spin on defensive wing in the following term.