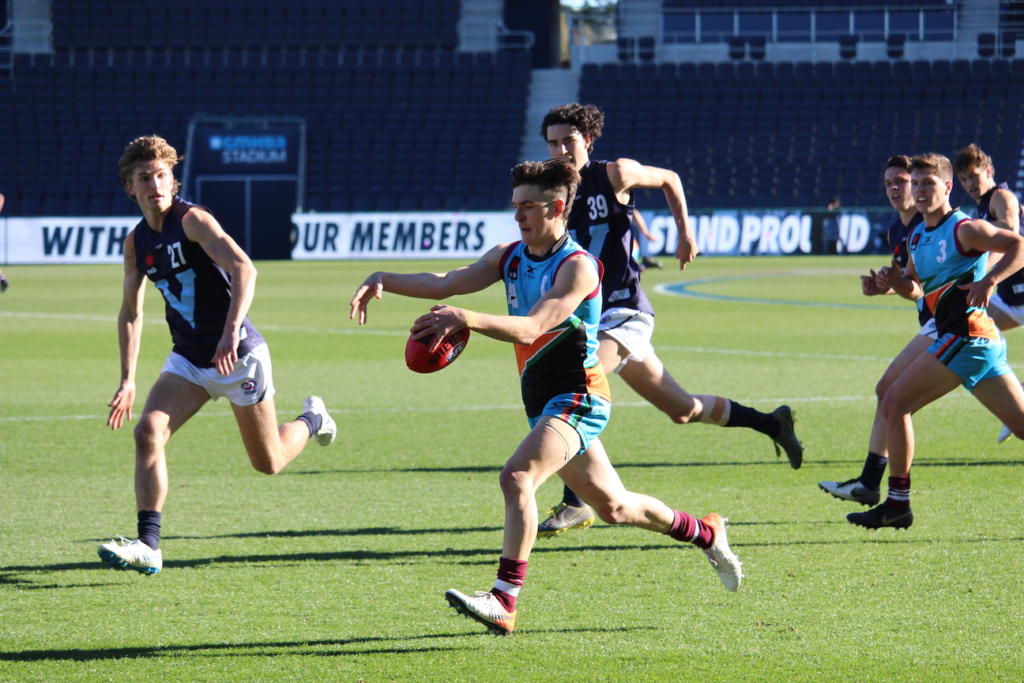 THE annual Under 18 National Championships may be the only chance we get to catch a glimpse of the class of 2020 before draft day, with carnival likely to take place in October. In the meantime, Draft Central takes a look at how each regional squad may line up should the championships come around, but with a few stipulations in place. We began with our Vic Metro, Vic Country, South Australian, and West Australian squad predictions, and today we take a look at the potential Allies line-up.

Players named as depth outside of the initial squad below are inevitably options who will rotate through the side, and it is impossible to fit all the options within a list of 22. But without further ado, let’s get stuck into the fifth and final squad prediction, with the Allies’ talent broken down line-by-line. The Allies squad is made up of talent from NSW/ACT, Queensland, Tasmania, and the Northern Territory.

Two Gold Coast Suns Academy members make up the heart of our proposed Allies defence, with genuine talls Jack Johnston (195cm) and Ryan Pickering (199cm) slotting into key position posts. The additions of Brodie Lake and Sam Collins contribute even further to the height and marking power of the defence, with Collins’ intercept and rebound qualities also valuable assets.

Collins’ fellow Tasmanian Patrick Walker should provide similarly astute ball use from defence at a shorter range, while Murray product Charlie Byrne also likes to push further afield and deal damage by foot. The back six should have no trouble competing aerially on the defensive side, while being able to yield an attacking threat on the turnover.

Queenslanders take up four of the six midfield spots in our Allies side, with Brisbane Lions Academy members Saxon Crozier and Carter Michael starting on either wing, while 201cm ruck Thomas Hofert has been tasked with tapping down to Gold Coast Academy teammate Alex Davies at the centre bounces.

There is plenty of grunt in the engine room trio of Davies, Braeden Campbell, and Oliver Davis; with Davies the tallest of the lot (191cm) as that pure big-bodied type, while Davis (182cm) is another extractor who comes in at a similar build to the speedy and versatile Campbell (180cm).

The likes of Crozier and Michael may fancy a run through the middle but seem well suited to the outside, with a number of flankers and depth options in our squad also able to pitch in. Still, we feel this is the best mix, and one which gives the Allies a great chance to compete strongly in the area in which each contest begins.

In a similar vein to the defensive mix, this forward six provides good versatility and some great marking power. Jackson Callow is the centrepiece at full forward, a physical key position type who is near-unstoppable with his contested marking, and may well take on ruck duties inside forward 50. Josh Green, brother of GWS draftee Tom, is a 192cm utility who can play up either end. He slots in at centre half-forward for now on account of his aerial ability.

The diminutive but brilliant Errol Gulden comes in on a forward flank but will have eyes on moving up to a wing, with fellow Swans Academy product Marco Rossmann a solid medium type who may also run through the midfield. In the opposite flank to Rossmann is exciting forward Blake Coleman, who along with Northern Territory prospect Joel Jeffrey, provides clean hands and a terrific goal sense. With silver service likely to come from a strong midfield core, this forward mix could do some damage at the national carnival when on song.

This interchange group is, well, incredibly interchangeable with the group of depth players listed below, but all bring something different to the side. Jared Dakin makes the cut as the only over-ager in the squad given he garnered interest at last year’s draft, and he’ll provide a good ball winning boost.

Tahj Abberley and Maurice Rioli Jnr add some x-factor and smarts at ground level as part of the rotational group. Abberley is likely to play as a small defender but is just as capable up forward or through midfield, while Rioli could well be the genuine small forward that the side is missing. Rounding out the chosen 22 is Marc Sheather, another versatile medium type who can play well above his size at either end given his athleticism.

There remains a decent crop of top-agers who narrowly missed the cut, and some bottom-aged talent which will inevitably squeeze into the team minus any stipulations. Among the most unlucky to miss were AFL Academy hub members Rhys Nicholls and Aidan Fyfe, who could both slot in as half-backs or outside types. Kye Pfrengle is another defensive option who will get a look-in, while Jack Briskey and Jack Driscoll are taller types who should also rotate through the same line. Meanwhile, Tyrrell Lui and Ryan Eyers are prospects who may also be thereabouts.

In terms of top-agers outside of the AFL Academy intake, Tasmania’s Isaac Chugg is a terrific athlete, while Devils teammates Will Harper and Jye Menzie are well known to selectors. Sydney’s Pierce Roseby is a tough small who thrived in NSW/ACT colours, as did Max Pescud in the Maroon of Queensland.

Moving on to over-agers, and Tasmanian over-ager Hamish Allan would help the ruck stocks at 206cm, with GIANT-turned-Knight Liam Delahunty another tall who remains among the Under 18 ranks. In terms of Queensland-based 19-year-olds, the likes of forward movers Bruce Reville, Josh Gore, and Hewago Paul Oea have already shown plenty of promise.

Finally, an exciting group of bottom-aged talent is set to cause some selection headaches, lead by Tasmanian gun Sam Banks. He, and Tasmanian teammate Baynen Lowe impressed at Under 16 level enough to warrant NAB League selection in 2019. Queensland Under 16 MVP Austin Harris will also push his case as a small defender, while GIANTS Academy members Sam Stening and Josh Fahey are hard to deny, as is big Queensland forward Noah McFadyen.