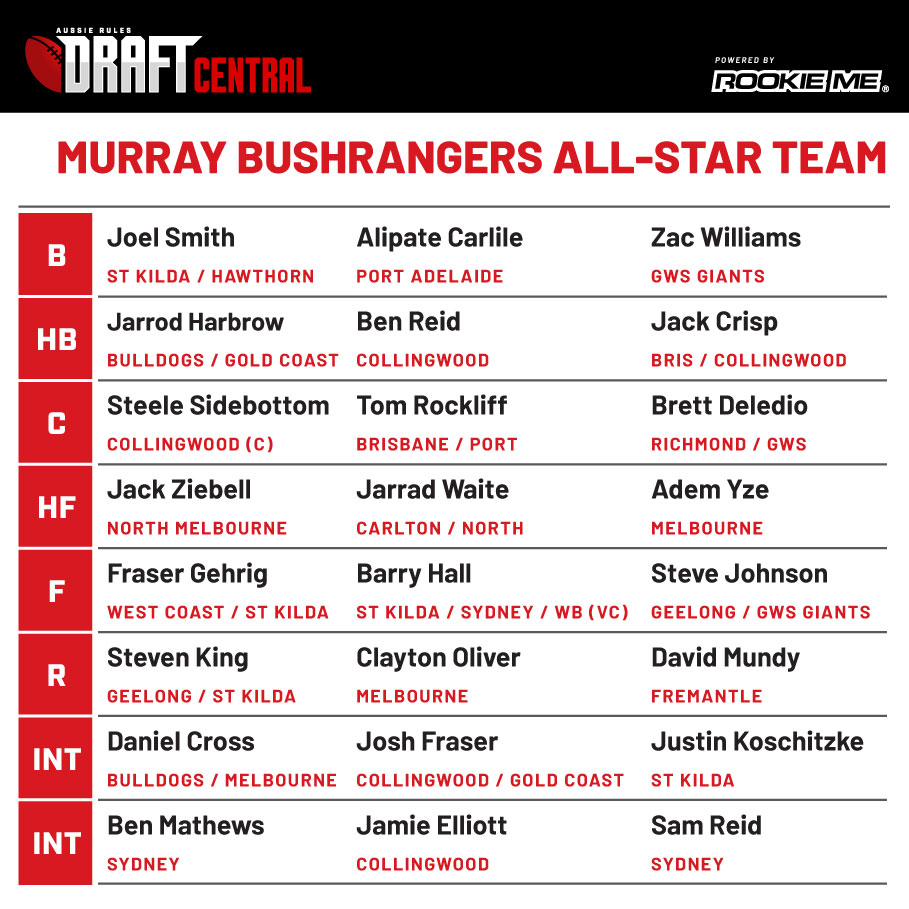 THE Murray Bushrangers could be the most balanced All-Star side of the entire exercise. There are quite literally no weaknesses in the side, and plenty of depth, with an almost perfectly balanced 24-player squad. If anything there might be a touch too much height, but that height has flexibility, and with a balance of hardness, class and midfielders who can slide back or forward, this team would be incredibly hard to beat.

Looking across the 24-player squad and it is madness in terms of the balance. A number of talls are capable of playing up either end, they have a couple of 200-game rucks, and then a nice combination of inside and outside midfielders who rotate forward or back. A key forward trio that could worry nearly any opposition side and then some more talls and smalls coming off the bench to impact, it is a coach’s dream.

Starting with the defence, picking two key position defenders was difficult. In the end, the best of Ben Reid locks down the centre half-back position given his dominance prior to injury, and then teaming up with Alipate Carlile who will make his opponent accountable, is a good combination. If the opposition is taller, they could throw Jarrad Waite down there, or even Sam Reid or Justin Koschitzke who start on the bench but can play across all three lines.

While Reid, Carlile and the others are not overly quick, they don’t need to be, because you just have to look at the mediums and smalls surrounding them. Joel Smith is the reliable back pocket who is often underrated but won two All-Australian awards and a best and fairest, standing as the only past player of the four small-medium types. Alongside him is Gold Coast’s Jarrod Harbrow, Collingwood’s Jack Crisp and GWS GIANTS’ Zac Williams.

They might not have the accolades between them that others have – just Harbrow’s one best and fairest – but everyone can picture the elite ball use coming off half-back as well as the speed going down the field. If the opposition has a dangerous small forward, then Ben Matthews can come on playing as a defender or midfielder off the bench.

Picking a starting five group of onballers is not an easy task in this side, and even changed right up to the point of publishing. The ones who simply have to be there are Steele Sidebottom – who was voted the Best Player of the AFL Draft Era by you, the public, on our Instagram channel – and Brett Deledio on the wings – with three All-Australians and four best and fairests between them – as well as David Mundy onball as the Bushrangers’ games record holder at AFL level with 316. He also has an All-Australian and best and fairest to his name, and has broken Richmond hearts twice in the last 30 seconds of the game – including once after the siren.

Also able to rotate through midfield is Jack Ziebell and Adem Yze who find their way into the team off half-forward flanks, whilst Crisp and Williams can float through there too. Many of those midfielders – particularly Sidebottom and Deledio can also spend time forward and hit the scoreboard.

If you thought the talent slowed by the forward six, you would be wrong. The talls of Barry Hall, Fraser Gehrig and Waite might look too top-heavy, but they are countered by the mediums and smalls of Ziebell, Yze and Steve Johnson. The latter might even have a case for the best medium forward of the modern era, winning three All-Australians, a Norm Smith and booting 516 goals in 293 games. But this forward line is so strong he only comes in as the third highest goal kicker.

The top honour belongs to Hall with 746 goals in 289 games, ahead of Gehrig with 549 from 260. Between them they have six All-Australians, two Colemans and a best and fairest. Add in Waite with a casual 377 goals and imagine the former Blue and Roo taking the third best defender each week. Whilst Ziebell and Yze could push into the midfield, both can play deep or high as forwards, making them unique goal scoring options.

Throw to the bench, and aside from Fraser and Koschitzke who could roll down there, Sam Reid and Jamie Elliott provide another tall and small option inside 50. Elliott in particular provides some dynamic play in the air or at ground level as that small forward with great pace and hurt factor. Ben Reid is one who can be thrown forward – as shown in recent years – to further stretch the defence.

The most unlucky one is Ben McEvoy who could squeeze onto the bench in exchange for Fraser. One might have already been impressed by the depth, but there were a number of solid role players who have carved out 100-game careers such as Shaun Atley (197 games), Sam Wright (136), Taylor Duryea (132) and Shannon Byrnes (131). If any of King or Fraser go down, the Bushrangers have some great depth in the ruck position that would make any other side in this All-Stars series envious thanks to Hamish McIntosh and Robbie Campbell. The remaining 100-gamers to miss out include Jarman Impey, Kayne Pettifer and Sam Rowe, with Impey a chance to force his way in if he continues his consistent work now with the Hawks.