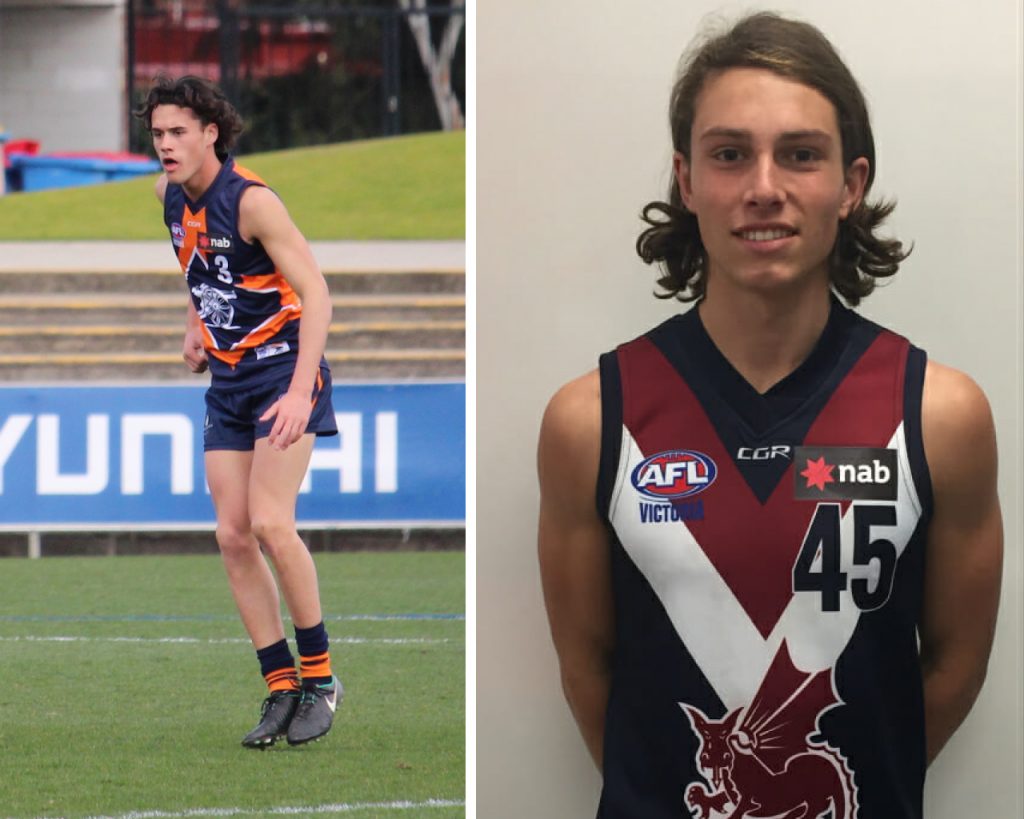 The pair next under the microscope – Calder’s Jackson Cardillo and Sandringham’s Archie Perkins – ironically already played alongside one another at representative level in 2019, and are set to do so again this year as part of Vic Metro’s Under 18 side. But it is at NAB League level where we may see these two line up on opposing sides, with Cardillo already a mainstay in the Cannons’ side, while Perkins is again set to don the Dragon in between school football commitments with Brighton Grammar.

Both are tremendous athletes who ply their trade in a mix of midfield and forward time, able to use their explosiveness in different facets of the game to catch the eye. Having spent the majority of their time inside forward 50 throughout 2019, the two movers of virtually identical size will now look to develop in more prominent midfield roles across all levels. With that being the case, Cardillo and Perkins would well oppose each other at centre bounces during the NAB League, or join each other on the opposite side of the centre and half-forward lines during the national carnival.

These are some of the more outstanding numbers from the Victorian preseason testing day, with both prospects so well matched across each area. Perkins clearly thrives in the jumps, producing massive efforts standing and off either side – something which also shines through on-field. Cardillo certainly does not lag in those areas, but his ground-level prowess is highlighted in very slightly quicker scores in the speed and agility tests. Perkins, a terrific mover across the ground and on the spread boasts a better endurance score, but that is not entirely reflective of Cardillo’s tireless work at the contest.

There is obviously a much smaller sample size to work with on Perkins’ size in terms of NAB League output, but the similarities between the pair are still evident in their 2019 numbers. Both players achieved similar disposal outputs, but it is Cardillo’s ground ball nous (3.8 tackles, 2.6 clearances) and Perkins’ aerial superiority (4.2 marks) which set them apart from one another.

The ability for Perkins to be a weapon going forward is also clear in his greater inside 50 (3.2) and goal (1.7) averages, with his impact hardly waning when used forward of the ball. On the other hand, Cardillo’s tackling pressure and hardness at the ball helps him thrive up forward, with his accumulative impact evident while running through midfield.

Overall, the pair returned very solid numbers as bottom-agers, particularly given they were both moved around the ground and had talented top-aged teammates to content with.

Cardillo’s season-high effort of 27 disposals stands well clear as his best game from a midfield standpoint, thriving on the inside and remaining relevant going both ways. It was the only game in which Cardillo managed to tick over 20 touches, on top of achieving a season-high in tackles with nine to prove his defensive worth. His ability to hunt the ball was also evident as he slammed forward eight clearances and three inside 50s, providing that all-important metres-gained element.

Speaking of, Perkins is one of the most damaging metres-gained midfielder/forwards in the entire 2020 draft crop, and proved as much in his 20-disposal performance against Geelong. Unlike in Cardillo’s best game, Perkins and his Dragons teammates went perilously close to losing in this encounter, scraping over the line by two points as the player in question booted five behinds. Had he been more accurate in the Ballarat conditions, Perkins’ game would have gone to another level given his outstanding marking efforts and penetration (16 kicks, five inside 50s) from half-forward.

Cardillo’s dual two-goal efforts could well have earned a shout here, but he only managed a combined 27 disposals in those outings, while his 19 disposals and one goal against Eastern in Round 17 made for another outstanding candidate. Perkins, too was well-versed against good opposition, booting three goals against premier, Oakleigh in Round 17, with his 16 disposals and two goals against the Sydney Swans Academy another performance near the mark.

As mentioned, Cardillo and Perkins are already familiar with each other, but as teammates rather than foes. The two ran out for the Vic Metro Under 17s in 2019, both returning decent numbers as part of the midfield-forward rotation. Perkins was arguably the better on the day, bossing the half-forward line early while later pumping the ball towards goal amid greater midfield time. Cardillo was utilised a touch more on the outside when running further afield, while also assuming his usual secondary role inside forward 50. With efforts around the 20-disposal mark, both players were among Metro’s most influential and versatile.

There are a few slight differences in either player’s listed strengths, despite their very similar makeups. The distinction of Cardillo’s ‘explosive speed’ to Perkins’ ‘explosiveness’ is deliberate, intended to hint that the latter is a more powerful overall package, while the former thrives slightly more in the specific area of speed. Perkins’ other strengths – vertical leap and athleticism – add to that case, though Cardillo is certainly no slouch across the board either.

While Perkins is as damaging as they come with his combination of forward penetration from high up the ground and scoreboard impact, Cardillo provides meterage in his long kicks, mostly from stoppage situations as he bursts away with that five-step speed and delivers the ball forward. The added trait of stoppage presence attributed to Cardillo is largely credit to his two-way work rate, with his attitude towards ball winning matched by a strong tenacity for tackling.

Cardillo’s nod for versatility applies to both players, but may be slightly more applicable to Cardillo at the next level, with his ground-ball presence and tackling pressure incredibly transferable to medium-small forward roles. On the other hand, Perkins is more of a dynamic, aerial threat who can have a greater say around the ground, providing a target while creating forward movement from almost nothing.

Picking out improvements for players with high ceilings is usually a relatively simple task, with such players typically quite raw and mistake-prone. But both of these prospects are pretty well polished, with only a couple of areas left to sharpen and help them become better overall footballers. Cardillo’s disposal consistency is something that can be fine-tuned, with his penetration no issue, but shorter options on the move and under pressure sometimes overlooked or missed. Though Perkins is so well suited to the outside, the suggested upping of midfield time means he can increase his ball winning rate, while not losing any of that damage or scoreboard impact he is already known for.

Round 14 vs. Bendigo Pioneers

The bottom-ager was tenacious in the contest, accumulating throughout the day and stringing together clearing kicks.

His tackling intent was shown in the second term, giving away an overzealous high free kick but following it up with a holding the ball tackle as Bendigo played on.

Cardillo also fared well when used up forward, finding space inside 50 on the back of a turnover to mark and goal, while also improvising a kick to assist a Jake Sutton goal as he gathered on the move. Really rate his aggression and ability to break tackles.

Just continually does eye-catching things up forward and through the midfield, using his power and confidence around opponents to burst through and get Sandringham going.

Perkins started with a really strong mark against two opponents as he worked up the ground from half forward, but had his greatest impact with three important goals from his 11 disposals.

His first goal came after finding space to mark close to the boundary just inside 50 and converting the shot, and his third came from a similar position but on the run – showing his improved finishing and ability to rise to the occasion against quality opposition.

The thing which makes this matchup so intriguing is how closely the pair is matched across their physical attributes. A single centimetre separates them, and they are two of the most remarkable Under 18 prospects across the country in terms of athletic ability across each department. Explosive midfield types are always a joy to watch, with those bursts from congestion often the most replayed moments on highlight reels. Both players may well be capable of producing as much at the elite level, and have the added asset of being able to impact the game up forward. Perkins may feature slightly ahead on draft boards, but both players are sure to provide eye-catching moments once back on the park as two of Vic Metro’s most promising hopefuls.