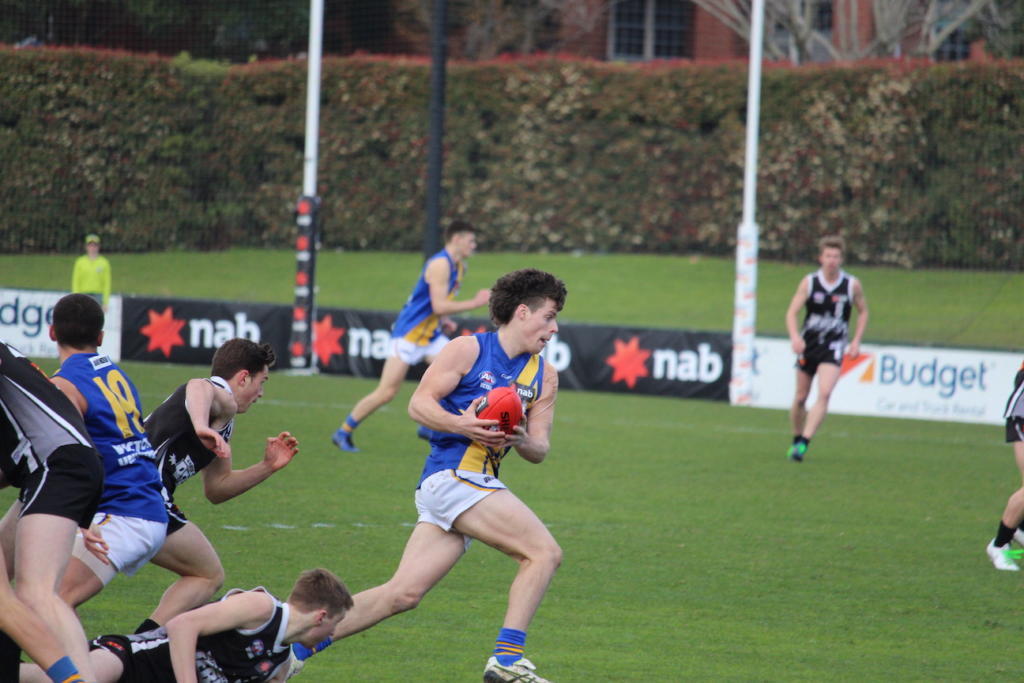 IF you are missing footy like we are, then let us somewhat salvage that with a look back in a new series of Classic Contests. In today’s contest we look at one of the would-have-been Round 11 clashes in the NAB League this year between the Greater Western Victoria (GWV) Rebels and Western Jets. In this edition, we wind back the clock to just one year to mid-2019, where the Metro side snuck home on enemy territory.

A battle of the two western sides went down in Round 11 of the 2019 NAB League, with GWV Rebels hosting the Western Jets in Ballarat on a late-June Saturday morning. Both sides were a touch undermanned amid the national carnival, with just one future draftee taking the field in Western graduate and Carlton rookie, Josh Honey.

The form between the two sides was heavily contrasted, with the Rebels coming off a 111-point belting at the hands of Eastern where they were kept goalless, capping a five-game losing run. The Jets were faring much better at that point, earning three wins on the trot including the scalp of Gippsland in Round 10 as they readied for their first meeting with GWV for the year.

It all meant Western came in right in the thick of a top three charge, sitting just two points off third and four off first in fifth spot at 6-3. On the other hand, the Rebels were down in 15th with their 2-7 record, but had some decent talent in which would have been hungry to arrest their alarming form slump.

For not of a lack of trying, the hosts found themselves immediately behind as Western adjusted better to the conditions, booting 1.3 to the Jet’s 3.1 in the opening term. The yips carried through to the second term for the Rebels too, this time exceeding Western’s scoring shots with a total of four, but putting them all through the behinds as the Jets managed 1.1 to open up a 13-point buffer at the main break, with double GWV’s score.

But with the game opening up slightly and the Rebels still within striking distance, we had a game on our hands. The home side proved as much, straightening up in front of goal to slam home three-straight majors in the third term to close the gap to eight points heading into the final stanza. While a goal to Mitch Martin midway through the term brought the margin back to a single point, Western had all the answers to run home seven-point winners in a tense finish.

Competition leading goalkicker Archi Manton was the only player to notch multiple goals with two on a low-scoring day, with 14 individuals across either side finding the big sticks. GWV’s Liam Herbert led all comers with 28 disposals and a goal, followed by Riley Polkinghorne (26) and Martin (20) for the Rebels, while Daly Andrews (27) was among four Jets to rack up over 20 touches. Honey was impactful with a goal from 16 disposals, but it was Western Bulldogs NGA hopeful Cody Raak who was named the winners’ best with 14 disposals and three marks from defence.

The two sides would go on to meet again in Wildcard Round, with Western advancing to the finals on the back of a 50-point win having finished 7th at 8-7. The Jets would crash out to Gippsland in the semi-finals after overcoming Northern in their elimination bout, with GWV’s 6-9 season ending at that. Jay Rantall would be the sole GWV graduate to find a home at AFL level, though that could well change in future, while Honey and Emerson Jeka were both picked up in the rookie draft following their time at Western.