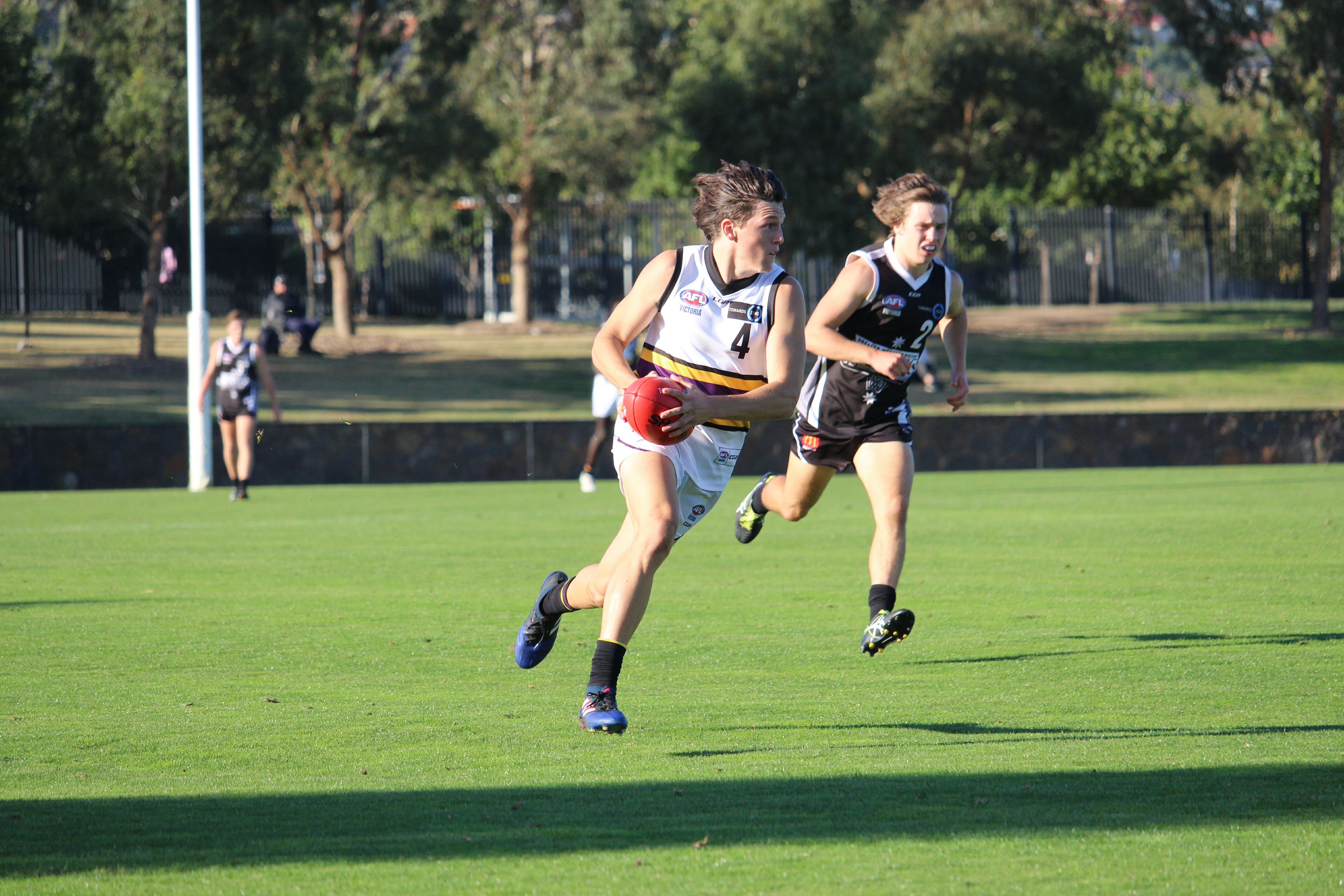 ROUND 2 of the AFL Premiership Season got underway last night, and whilst no players made their AFL debuts for either Collingwood and Richmond, there are at least five debutants set to run out for their teams this weekend. Ned McHenry, Thomas Berry, Luke Jackson, Trent Rivers and Laitham Vandermeer will all make their debuts, whilst Tristan Xerri, Dylan Stephens and Chad Warner have been named in extended AFL squads.

The small midfielder/forward with great evasive skills gets his chance for the Crows in the Showdown, able to play in front of crowds on debut unlike his peers from Round 1. In his first season at SANFL level last season, McHenry averaged 18.1 disposals (at 77 per cent efficiency), 5.3 marks, 4.5 tackles, 1.6 clearances, 2.8 inside 50s and 1.8 rebounds. He earns his chance without any football behind him, but you can be sure he will not leave anything out on the field.

“Ned McHenry is a great player who clubs should not overlook just because of his size. Like any Under 18s player, McHenry has his great games and his quieter games, and he is not the quickest player going around. However, he is the draft crop gut-runner who is a tackling machine with good evasion techniques and decision making, as well as an ability to win clearances and play through the midfield or up forward. He is one of those players that will have a high standard he sets himself, and once he slots into a club at the elite level, expect him to get the absolute most out of himself.”

Berry joins his brother in the Lions top for the first time after plying his trade through the NEAFL last year. He averaged 14.7 disposals, 2.8 marks and 6.5 tackles, which is what he brings to Brisbane on the field. He is a fierce tackler who has elite athletic traits, and no doubt has had time to build up deficiencies in his game to come out and have an impact against Fremantle at the Gabba.

“Tom Berry is an elite athlete who loves a contest. He attack the ball with vigour, and while he has not had a clean run at it, he has still shown some promising signs. Most notably, Berry has added versatility to his bow in season 2018, however his kicking and decision making still needs work. The most agile player in the draft crop and one of the top speedsters on offer, Berry will still have no shortage of clubs looking at him, with the goal of working on those improvements. When he gets the ball, if you give him an inch he can burn you in a second, so his acceleration and power will excite plenty of fans at whichever club he lands at, joining brother Jarrod at the elite level.”

The top three selection from East Fremantle will earn his chance early in the season after narrowly missing out on Round 1 selection. Jackson is beneficiary of Simon Goodwin swinging the axe with seven changes to the side for the clash against Carlton. Playing for the Sharks in the Colts last season, Jackson averaged 32.6 hitouts from 18.6 disposals, 3.1 marks, 4.4 clearances, 2.4 tackles and 1.0 goals per game.

“As a ruckman, Jackson uses his awesome athleticism to leap higher than the other ruckman to win the hitout for his team, and due to his solid ruck craft he regularly palms the ball to his midfielders’ advantage regularly. He also covers the ground really well, and spreads forward, forcing his opponent to be defensively accountable. “At this stage, Jackson looks more comfortable up forward due to his overhead marking ability and solid goal kicking action. Once he is in an AFL environment he can develop his craft either as a forward or as a defender which will allow him greater flexibility as a footballer.”

One of the most reliable and consistent players across the board in last year’s AFL Draft crop, Rivers joins Sharks now Demons teammate Jackson on debut. The pair have come through the West Australian pathway together, and were members of the title-winning National Championships squad last year. In 2019, the versatile utility averaged 26.8 disposals, 5.2 marks, 4.1 clearances, 4.1 tackles and 1.1 goals for East Fremantle in the Colts.

“One of Rivers’ greatest strengths could be considered an area of improvement. His ability to play in almost any position is excellent for someone his age, but he did not really nail down one spot this year. While some of the top 10 players might be considered elite in their respective positions, Rivers is solid across the board, without determining a clear standout role. Although, once he’s in an AFL system, he has the scope to make any position his. Rivers is a really promising prospect who could have an impact at AFL level early on in his career.”

A surprise packet from the 2017 AFL Draft, Xerri always showed potential from a young age as a beanpole tall who started growing into his body through his top-age year. His vertical leap, field kicking and versatility were among his strengths, whilst he had to improve his footy smarts, consistency and speed. This is no doubt a key reason he has been plugging away for the past couple of seasons at state league level, where Xerri has become a really strong ruck/forward option. In 2019, he averaged 17.9 hitouts and booted 12 goals in 16 games, something he will hope to replicate for the Kangaroos against the GIANTS on Sunday if named in the final squad.

“Tristan Xerri is a raw tall who despite his 96kg is still learning the game. At times he would make some mindboggling decisions on the field, but he seemed better suited in the ruck than up forward. He is a nice field kick who while not overly quick, is good in the air and can play deep or high in the forward line. More of a rookie pick than anything, but he has a few tricks from which clubs can take and build upon.”

South Australia’s top draft selection from last year, Stephens is in line for a debut with the Swans if selected on game day. He is named among a six-player inclusion for only two confirmed changes, but even if he misses out, a debut will not be far away. He has terrific outside ability and can play inside, though will likely play off a flank or a wing if need be. A natural ball winner who already has experience against senior bodies, Stephens will have no problems adapting to the elite level. In 2019 playing in the SANFL League, Stephens averaged 18.8 disposals, 3.8 marks, 2.0 clearances, 4.7 tackles and booted six goals in 13 games.

“Stephens was able to flash his natural abilities throughout the course of the SANFL and National U18 Championships. His outside game has been tremendous, the most obvious asset to his armoury so far and his earned him comparisons to AFL stars Andrew Gaff and Lachie Whitfield. Dylan’s continuous movement is supplemented by the capacity to lead up to the ball, break away from the pack and use the ball wisely when entering forward 50. Stephens is a superb athlete displaying his speed (2.97 20m sprint), endurance (21.2 Yo-Yo test), agility (8.24 seconds), and 2km time trial time of 6.01 minutes at the National Draft Combine. He is likely to play that wing role at AFL level, but has shown he can play on the inside, but still with a high-leaning uncontested ball”

The natural ball winner and hardnut was another predicted to make an early season debut due to his high work rate and readiness to play senior football. The third East Fremantle player to potentially make his debut in Round 2, Warner racked up 27.1 disposals, 2.9 marks, 6.4 clearances, 6.4 tackles and booted eight goals in nine games for the Colts. Warner is the definition of an inside midfielder, running at a massive 62.8 per cent contested rate in his top-age year.

Throughout the year, Warner showed off his excellent contested work, often winning the hard ball before distributing it to his outside runners. As well as showing off an excellent offensive skill set, Warner demonstrated a desire to be an excellent two-way player, showing off a ferocious attack on the man with the ball to win it back for his team. He may not have the penetration in his kicking, but Warner has also shown an ability to be effective and damaging with his handball ability, often opening up the play for his team from stoppages. Compared to some other midfielders in the draft pool, Warner does not boast the same explosive athleticism as some other midfield prospects. However, he did test well at the National Combine in the 2km time trial (6:29 minutes), the and yo-yo test (level 21.6). What is evident is that Warner plays to his strengths; a handy skill to have in an AFL environment.”

The speedy and skilful Murray Bushrangers runner could hardly be faulted across his top-age and over-age seasons at the club, missing out on AFL Draft selection as an 18-year-old in 2017, so he went back and was picked up the following year after an even more impressive season. Vandermeer also had the rare feat of playing every game in his over-age year for Vic Country. Playing for Footscray in the VFL last season, Vandermeer averaged 14.6 disposals, with his best effort coming in the final match of the season against Port Melbourne, racking up 24 disposals, six marks, three tackles in the finals series.

“Vandermeer has plenty of appealing attributes and he has proven that he’s worked hard on the deficiencies in his game which caused him to miss out last season. For the second year in a row, Vandermeer has done everything right in making himself an attractive option to club recruiters. It is extremely unfortunate that his season was cut short due to injury but he has shown enough positives throughout the year to be awarded a spot on an AFL list. He’s one of the more appealing prospects for clubs looking for a speedy, outside player with clean ball use and he will most likely be selected late in the draft or possibly in the rookie draft, if successful.”