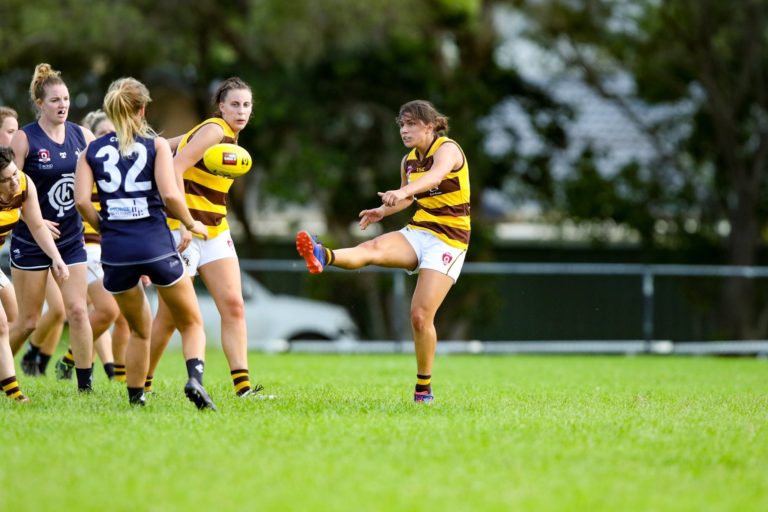 AS the postponement of all seasons commenced over the last week, we head back to the pre-season where we chatted to a number of athletes across the country. In a special Question and Answer (Q&A) feature, Draft Central‘s Taylah Melki chatted with Queensland’s Isabella Kotatis at the state testing day hosted by Rookie Me.

TM: How did you get into footy, Izzy?

What is it that you love about football to have kept you in it for so long?

“The interaction with everyone, you make a lot of new friends through it. Just the friendship groups I guess.”

What made you start Auskick, have you just always been interested in footy?

“My little brother played it. Me, my sister and my brother all used to do sports together so we all decided to do it.”

Has it always been only football for you?

“I’m playing Rugby 7s for school, a bit of touch, and a bit of netball. But mainly just rugby and (football).

How do you balance the two?

“It’s a lot busier now since I’ve been part of the academy. There’s barely any time to play rugby for school so I’ve got to try and make days as it’s the same days as the academy training.”

And how are you finding being part of the academy?

“Really good. I’m learning more new things than I would if I wasn’t in the academy. With club it’s a lot different compare to the academy, it’s more of a high level.”

Do you enjoy that higher level and intensity?

What would you say are some of your strengths on-field?

“I would say my speed and hunger to get the ball.”

On the other side of that, what are you looking to improve on?

“My weaknesses would probably be my defensive area, as I’ve been playing a lot more in the half-back role. Hopefully just improving that to be the best I can be in that area.”

How are you finding playing that position?

“Really good, I’ve only just started playing it recently. There’s a lot more things that I could improve on but I’m enjoying it a lot.”

What are you hoping to get out of this season?

“Hopefully to be drafted at the end of the year. That’s my goal, but also just to improve my footy a lot.”

Has there been a lot of travel for you over the journey?

“Yes. As I said with rugby, football is my number one priority so I’m just trying to balance it out with school and trainings.”

How do you manage all the commitments, especially with school?

“I’m in Year 12 this year so it’s a lot harder with everything but somehow I’m managing to do it all.”

Do you have any sports stars or idols you’ve looked up to over the years?

“I looked up to (Lance) Buddy Franklin from Hawthorn, but now to the Sydney Swans, because he was my brother’s favourite. If it was to be with the AFLW, I’d probably say Monique Conti.”

“Just her ability to chase the ball and how her speed is really good, with good pressure.”

And how has the preseason been for you overall?

“Really good. It’s been a lot harder trying to get fitter throughout the whole season but it’s been good.”