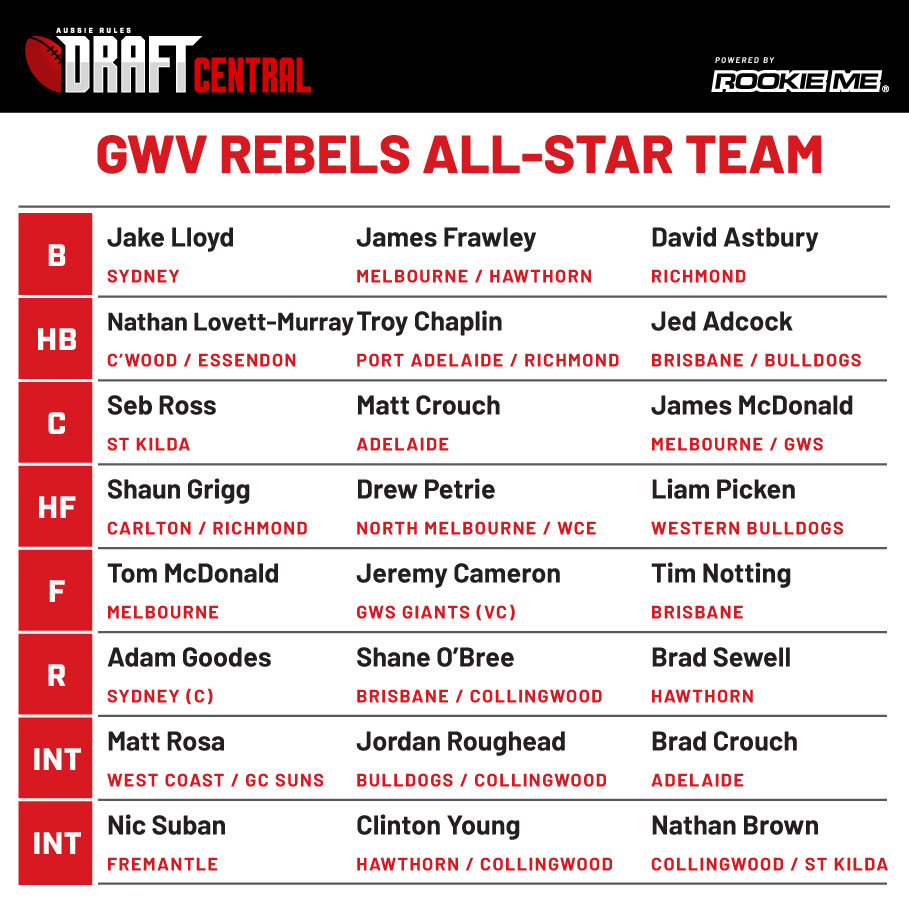 THE Greater Western Victoria (GWV) Rebels – formerly known as North Ballarat Rebels – have an interesting team. As we will discuss, the Rebels have an abundance of key defenders, and a legend leading the side in Adam Goodes who has been the standout player coming from the Rebels, across his AFL career.

There is undoubted talent across three lines, but it is more the ridiculous depth of its key defensive stocks that make it a hard team to formulate. There are up to six players whose preferred position is in a key defensive role, something that is usually pretty hard to come by. Having Goodes in the side allows the Sydney champion to play anywhere on the field, and the ruck is a clear deficiency in terms of depth, so he heads there to lead a hardened inside midfield group.

The key defensive stocks are a smorgasbord of options. In this team, James Frawley, Troy Chaplin and David Astbury all earn starting spots in the back six, with Tom McDonald (forward pocket), Jordan Roughead and Nathan Brown (both bench) also in the team. It is a bit top heavy, but they standout above those who missed out on selection in the team.

For the medium-smalls, Sydney rebounder Jake Lloyd will provide the outside run alongside former Essendon talent Nathan Lovett-Murray and Brisbane turned Western Bulldogs defender Jed Adcock. The trio provide the speed and run that might be lost by having multiple strong, but less athletic keys in the back six.

Led by Goodes in the ruck who has two Brownlow Medals, four All-Australians, three best and fairests and a Rising Star Award just to name a few of his accolades, the midfield looks pretty strong. Shane O’Bree and Brad Sewell provide the inside hardness and unwavering effort that coaches would rely upon as they showed over their 200-plus games at AFL level.

Matt Crouch joins them in the starting midfield with the more recent Crows talent having a couple of elite years over at West Lakes with an All-Australian and best and fairest to his name. On the wings, James McDonald is another hardened soldier and one who could be utilised in a tagging role, while Seb Ross has been a standout player for the Saints of late.

Turning to the bench, Brad Crouch could very well start in favour of just about any of the midfielders, but just has not had the continuity to earn a start just yet – though his 2019 season was huge. Also on the bench is West Coast and Gold Coast winger Matt Rosa, whilst Clinton Young – who could also play in the backline is there, with Nic Suban in a similar position.

The forward line stretches a little thin when it comes to smalls and mediums, though that is set to change in the coming years. In terms of the experienced top-end quality, Jeremy Cameron, Drew Petrie and Tom McDonald provide a three-pronged attack with the latter able to play in the defensive half. Cameron’s two All-Australians, one Coleman Medal and one best and fairest make him a challenging player to beat having booted 403 goals in 154 games.

Around them are three hybrid mid-forwards in Shaun Grigg – who could also play ruck if required – Liam Picken and Tom Notting who were all strong contributors for their sides in their premiership years. The forward half of the ground for the Rebels is very fluid and versatile, able to rotate players around quite easily which would be a bonus for any coach.

We mentioned already how strong the key defensive stocks are for the Rebels, but believe it or not, there were two others who could have deserved a spot in the side. Shannon Watt (155 games) and Michael Jamison (150) were both unlucky, whilst James Walker (151) was the other 150-gamer to miss out.

After that the unlucky omissions drop down to the below-90 games with Mark Orchard (86) and Kyle Cheney (85) next in line. However look slightly below that, and the next way of AFL stars is ready to break into the side. Fast forward a few years and expect the likes of Daniel Rioli, Hugh McCluggage, Jarrod Berry, Darcy Tucker and Jacob Hopper all to squeeze into the outfit.

Throw in Rowan Marshall – who is in some elite form last season – and Oscar McDonald and the team has a high volume of depth that will likely see some of the 150-plus gamers fall out of the side in exchange for youth. If this team was constructed in a few years, this might be the most altered team of the lot such is the young talent coming through the AFL system.