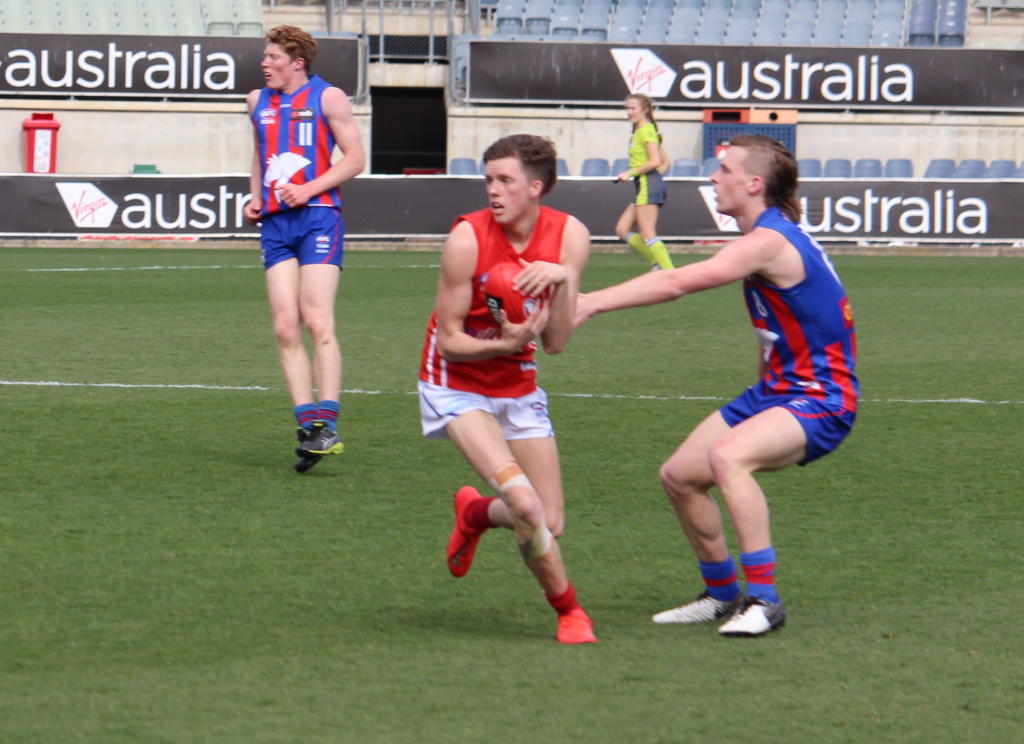 FIVE of the six fixtures scheduled for Round 11 of the 2019 NAB League were played out on a super Saturday, with Gippsland among the big winners. In an interesting quirk, the eventual top four sides all squared off against each other, with the Power facing Oakleigh, while Eastern and Sandringham went head-to-head in Sunday’s lone fixture. Mars Stadium in Ballarat hosted the lone double-header of the weekend, while Tasmania was again raided by a Victorian side and Calder enjoyed the bye.

That side was Northern, who came out narrow nine-point winners against the Devils at Kingston Twins Ovals. The Knights looked to be coasting to victory having led at every break, laying claim to a 19-point buffer at three-quarter time, and extending the margin out to 34 points less that 10 minutes into the final term. A late charge by the home side would fall short as Northern took its foot off the gas, but still travelled back to Victoria with the four points.

Heading back to Victoria, and Western made its trip to Ballarat a fruitful one by trumping the Greater Western Victoria (GWV) Rebels by seven points. In a similar vein to Northern, the Jets led at every break in the low-scoring affair, but were made to work for their victory as GWV pulled to within a single point midway through the final term. The fightback would again prove too little, too late though, as Western held on to secure its seventh win.

Competition leading goalkicker Archi Manton was the only player to boot multiple majors (two), with individual goalkickers spread across the two sides. Liam Herbert (28 disposals) and Mitch Martin were among the Rebels to find a good amount of ball and the big sticks, with Carlton rookie Josh Honey (16 disposals) Western’s highest disposal winner to also bag a goal. Daly Andrews impressed with 27 touches, as did the pairing of Josh Kellett and Lucas Rocci in defence.

They say when it rains, it pours, and that proved the case for Dandenong after having its undefeated streak snapped in Round 10, following it up with another loss – this time to the Murray Bushrangers to the tune of 34 points. Murray’s inaccuracy was the only factor keeping the Stingrays in the game for the best part of three quarters, with its 25 scoring shots to 11 only yielding a 19-point lead at the main break. The Bushrangers finally managed to reverse the trend in the fourth term to run out comfortable winners.

Ryley Bouker and Dominic Bedendo were a couple of bottom-age Bushrangers to impress in front of goal, evenly sharing six of their side’s goals in the win. Another bottom-age pair, Max Gregory and Jai Neal also booted multiple goals, combining for four of Dandenong’s 10 majors. Murray’s hold on the game shone through in its ball winners, with Cam Wild (29 disposals) and Jye Chalcraft (27) well ahead of Dandenong’s best in Bayleigh Welsh, who managed 19 touches and a goal.

In the second game of Saturday’s Ballarat double-header, two country sides went at it for the second time in season 2019. Bendigo would again come up trumps over Geelong, setting up the 29-point win with a six-goal to one second term and holding on to secure victory despite being kept scoreless in the final quarter. The Falcons’ superior finish provided a slight positive despite the loss, as the young side had become known for late fade-outs.

Morwell was the next country venue to host NAB League action, as Gippsland took on Oakleigh in what would end up being a qualifying final preview. But the strong Power unit took home the points on this occasion against the undermanned Chargers, keeping them scoreless in the third term while booting five majors of their own to make up most of the eventual 46-point winning margin.

The day arguably belonged to rookie draftee Fraser Phillips, who booted 5.3 from 20 disposals in a huge outing, with Tom Fitzpatrick the sole other multiple goalkicker. St Kilda recruit Leo Connolly led all comers with 32 disposals and a goal, while bottom-ager Sam Berry and former skipper Brock Smith were among three players to notch 26 touches. Vincent Zagari (22 disposals) was Oakleigh’s leading ball winner, followed by bolting 19-year-old forward Cooper Sharman (20 disposals, one goal) on a down day for the eventual premiers.

Sunday’s sole fixture again proved to be a finals preview, as Eastern and Sandringham did battle in a top of the table clash at Box Hill City Oval. Both teams were slightly undermanned, especially the Dragons, and it somewhat showed as the low-scoring affair was played on the terms of the structured and disciplined Ranges side. They would prove a tough nut to crack, holding out for the 18-point victory and keeping Sandringham goalless in the final term.