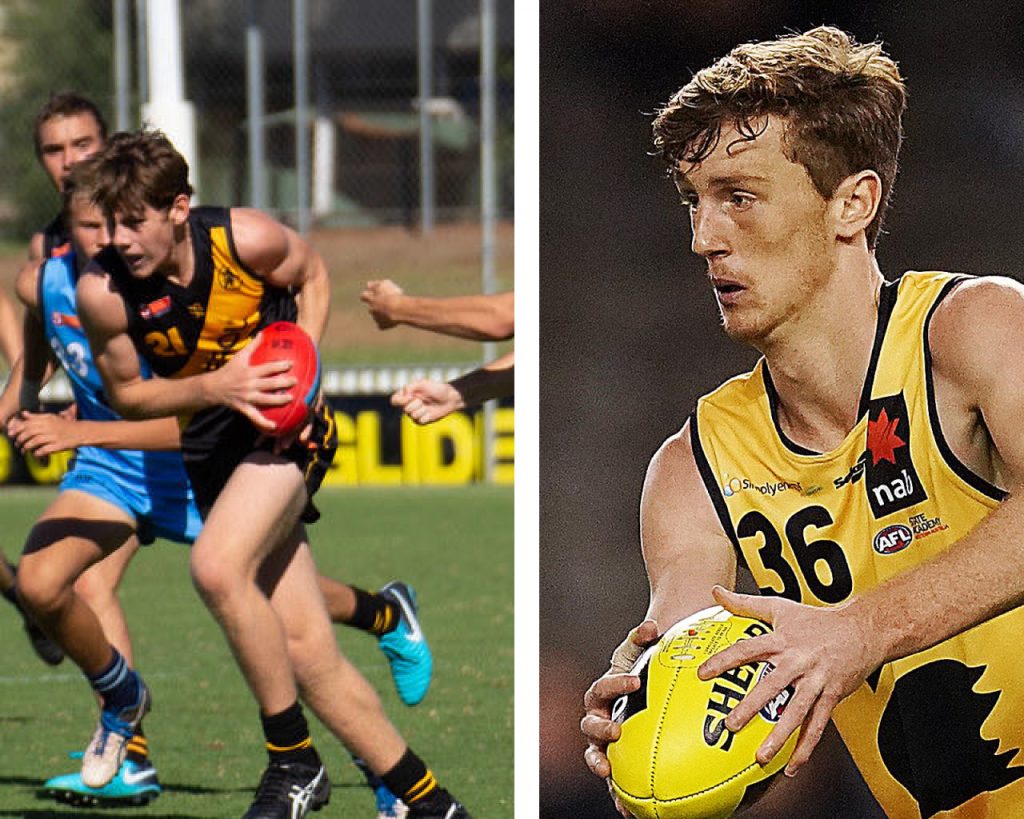 DESPITE remaining in the unknown of football’s temporary absence, Draft Central is set to ramp up its draft analysis with another new prospect-focused series, Marquee Matchups. We take a look at some of the high-end head-to-head battles which look likely to take place should the class of 2020 take the field, comparing pairs of draft hopefuls to help preview who may come out on top.

The next pair under the microscope hail from South and Western Australia respectively, with Glenelg’s Kaine Baldwin and Swan Districts’ Denver Grainger-Barras pitted against one another. Entering the key position department, Baldwin is an strong key forward who is near-unstoppable in the air and covers the ground well, while Grainger-Barras is a versatile defender who can play the lockdown role just as easily as an intercepting or third-up type. Unfortunately, both suffered injuries across their bottom-age year, with Baldwin ruled out after his first outing for 2019 with an ACL injury, and Grainger-Barras requiring shoulder surgery in the back half of the year.

Having both contributed to the spine of the 2018 Under 16 All Australian squad, this looms as a classic key forward versus key defender matchup which will likely take place at some point should the two run out for their respective states in the 2020 Under 18 National Championships. Without further ado, get up to speed with how the two match-up in terms of their form to date, strengths, improvements, and what has already been said about their performances in our scouting notes.

For players who are regarded as key position prospects at the junior level, they are both quite impressive athletically. Keeping in mind that Baldwin’s testing results came at the end of a year-long rehabilitation for his knee injury, he stacks up quite nicely. The aggressive forward returned a very respectable 20.8 yo-yo test score – identical to Grainger-Barras’ effort – which will only get better as he continues to rebuild and improve his tank.

Both athletes’ aerial prowess is reflected in their very even vertical jump scores, able to breach the 70cm mark off both feet off a rolling start, and 60cm standing. Grainger-Barras fared slightly better across the speed and agility tests, posting terrific times for a player of true key position height. Again, considering Baldwin is coming off a long-term knee injury, his agility time of 8.54 seconds is impressive, and the underwhelming 3.18-second 20-metre sprint can be excused as he usually covers the ground well over time and has decent pace off the lead.

It is obviously difficult to compare statistics here given they have been extracted from different years and age levels, with Baldwin’s only game for 2019 cut short and at the SANFL Reserves level. Looking back at his SANFL Under 16 stats, and it is clear that Baldwin is a true centre-half forward, rather than that typically one-dimensional full forward. His ability to move up the ground and impact the play aerially is reflected in his averages of 21 disposals and 9.6 marks, while still maintaining a very good goal average of nearly three per game.

Grainger-Barras is just as capable in the air, but thrives more significantly in the sense that he can play his role so consistently well. He is a true defender’s defender, able to stop the opposition’s best key forward while breaking up the play with his reading of the ball in flight and marking skills. He may not see much of the ball, but typically uses it soundly and can get some rebound going on the back of his efficiency.

The contrast may seem stark in terms of pure numbers, but these two performances stack up fairly evenly when put into context. Baldwin’s best game was selected from his 2018 Under 16 campaign, in a massive win where he managed season-highs in disposals (29) and goals (four). He may not have showcased his contested marking as well as in other games but still managed four, and really conveyed his mobility as he impacted up the field. His versatility as a key position player also shone through, able to pinch hit in the ruck at the junior level.

Grainger-Barras may have returned bigger numbers across his WAFL Colts campaign and sole League outing, but this quality performance against good opposition at the Under 18 national carnival was simply too good to overlook. Against elite-level talent above his age grade, the 195cm defender played a terrific role floating across the back half, while also keeping tabs on the likes of Elijah Hollands. His marking game and reading of the play were exceptional, and it was a performance which only solidified his status as one to watch for this year.

Both players, putting it simply possess the key strength of marking well, but do so in different ways. While Baldwin is able to crash packs and use his strong hands to clunk marks under heavy duress, Grainger-Barras is slightly taller and uses his athleticism to get to an array of contests, moving efficiently to intercept in the air. The reading of the play and intercept marking aspects go hand-in-hand, and also add to his defensive versatility. As already mentioned, the West Australian can play the lockdown defensive role well, but has great composure on the ball and can deliver it well out of danger, with his ability to play as a second or third tall in defence another string to his bow.

Baldwin’s aggression and strength contribute to that key asset of contested marking, with few keen to step in the hole and get in the way of his 91kg frame. His ability to pull of eye-catching moments and have a say further afield play into his high-impact style, with goals a bonus to the overall package he delivers. Of course, ground coverage is something that comes with his ability to venture out as a centre-half forward, and will only improve as he builds that endurance after a long lay-off.

It is perhaps harsh to put durability and endurance as improvements to be made for either player, especially given the parameters surrounding Baldwin. But being able to prove his durability will be key, although recruiters have shown faith in many prospects who suffered long-term injuries during key years of their development. The question of versatility comes from Baldwin’s height, just below true key position size for AFL standards. Given he is working on perhaps even moving into the midfield, gametime will be key to proving his potential in that area.

Grainger-Barras’ offensive output could help him become an even more versatile defensive outlet, with his ball use already at an outstanding level. If he can be let off the chain and showcase those traits more by winning more of the ball across the backline, he could be such a weapon coming out of defence. It seems as if we are clutching at straws and that is often the case with high-end prospects, but there is always room for improvement.

2018 Under 16 National Championships vs. Vic Country

Baldwin was another who had a greater impact than what his stat-line would suggest. His contested marking overhead was outstanding; both deeper forward in the first half, and higher up the ground as the game wore on. Baldwin found his way into the game in the second term when he booted his lone goal and missed the chance to add another within a minute. He continued on with an assist to Zac Dumesny in the third term before clunking a couple more contested marks to finish the day with seven overall from 15 disposals.

Another bottom-age tall who will hold the West Australian side in good stead for next year, he has some neat defensive and offensive attributes. He killed a contest at half-back with a great spoil across the line, and proceeded to be an intercepting defender throughout the game, saving a number of dangerous forward entries by dropping into the hole. Most importantly, he remained composed under pressure and looks like a promising prospect.