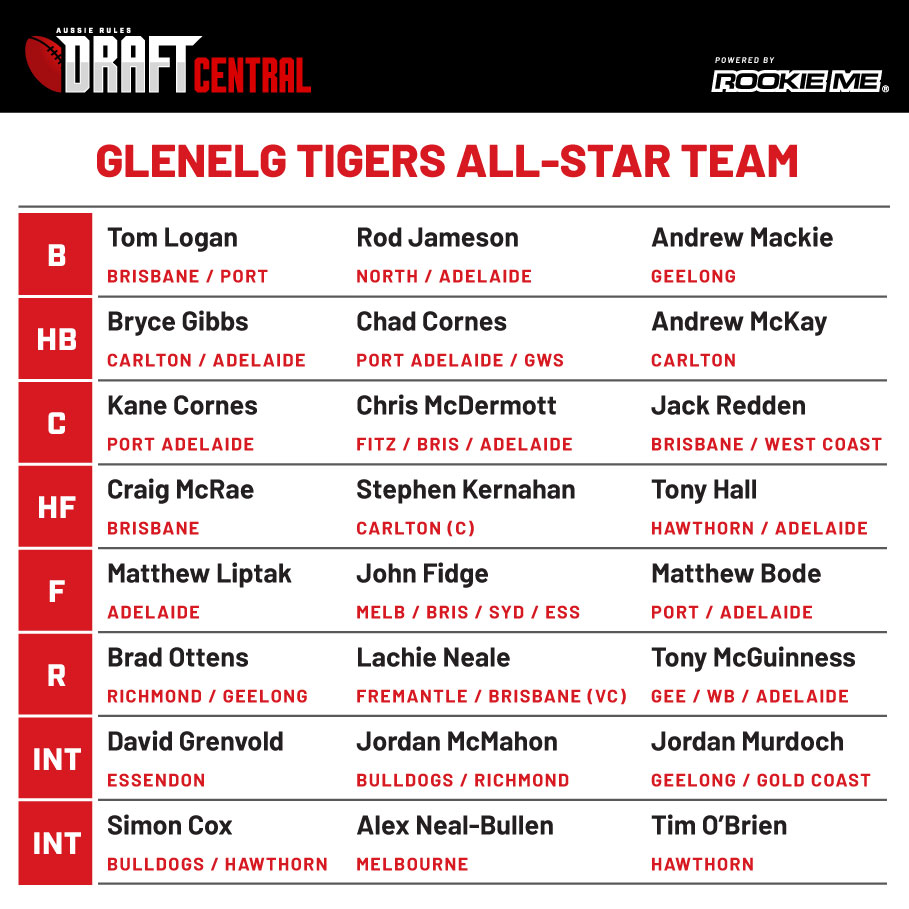 GLENELG TIGERS have a talented All-Star team with some elite players to help straighten up the side and make it ultra-competitive. The Tigers have some strong key position players and those with a heap of premiership success which means they already know what it takes to be the best side.

The team has a strength in defence, with some stars littered through midfield and up forward, including Blues legend Stephen Kernahan who was named captain of the Tigers after winning out All-Star voting. Whilst the depth is not as high as some other sides, they still have viable options coming off the bench who were able to hold up positions in best 22s at VFL/AFL level for some time.

Holding down the key back positions were Chad Cornes and Rod Jameson providing some serious strength there, whilst a number of medium-smalls provide some elite depth. Jameson was named at full-back in Adelaide’s team of the decade, but also kicked 113 goals across nine seasons as he spent some time up forward. Cornes played 239 games with the Power, including the 2004 premiership side. A dual All-Australian, Cornes moved to New South Wales, where he played 16 games for GWS during the club’s infant years. He is also a member of the SANFL Hall of Fame and amassed 50 Brownlow votes across his 15-year career.

Geelong legend Andrew Mackie in the back pocket with three premierships to his name and an All-Australian honour, whilst no-frills utility, Tom Logan assumes a role in the other back pocket. At half-back, Carlton great Andrew McKay played out 244 games and won a club best and fairest in his final season at AFL/VFL level for the Blues. Sliding back to half-back is Bryce Gibbs, the only current player in the back six. He could also play on a wing, but in this scenario has moved back to half-back where he could show class as he did where he won a best and fairest and All-Australian honour. Looking to the bench, Essendon premiership player David Grenvold could come on and provide some support,

The midfield is huge, with Port Adelaide midfielder and tagger Kane Cornes joining his brother in the side. He played 300 games with the Power and was able to accumulate four best and fairests and two All-Australians in his 15 seasons with the club. On the other wing is West Coast’s and former Brisbane midfield Jack Redden who also provides some more recent talent in the side, with 227-game Crow Chris McDermott in the centre. McDermott was the inaugural captain of the Crows, and also named captain of the 1992 All-Australian team as well as a best and fairest and numerous other awards.

Onball, former Richmond and Geelong star Brad Ottens will take the ruck duties and could also switch forward, booting 261 goals and also earning All-Australian honours and three premierships with Geelong. Two players a couple of decades apart combine in the midfield, as Lachie Neale and Tony McGuinness team up. Neale has catapulted into the top players in the competition of late, with 89 Brownlow votes in 159 games, as well as two best and fairest and three Ross Glendinning Medals as a Docker, before adding an All-Australian honour as a Lion. McGuinness played more than 200 games for both Western Bulldogs and Adelaide, earning three All-Australian honours two best and fairest awards and captained Adelaide for two seasons.

A strong mix of talls and smalls, there is no bigger legend than Kernahan at centre half-forward. He racked up three best and fariests and five All-Australian awards, finishing his career with 738 games from 251 games. His legend lives on as a Glenelg, SANFL and Carlton Hall of Fame member, as well as the Blues’ all-time leading goalkicker. His full-forward teammate is a lot less known, but had bang for his buck. John Fidge was recruited to four VFL/AFL clubs but only played at Melbourne and Brisbane where he combined for 59 games and 92 goals, including regular hauls of four and five majors.

Across the half-forward line is Brisbane premiership talent Craig McRae who played 195 games and booted 232 games on his way to three premierships. On the other flank is Bays legend Tony Hall who played 114 games with Hawthorn and then Adelaide, booting 174 goals and was named All-Australian in 1988, the same year he won the first of two flags – one with each club. In the pockets are Matthew Liptak and Matthew Bode who both predominantly played for the Crows, while Bode also represented Port Adelaide initially. Liptak booted 128 goals in 116 games, also playing as an inside midfielder, while bode booted 96 goals in 108 games with the two clubs. Key position Hawk, Tim O’Brien is a player on the bench who could provide height up forward.

Small forward Lincoln McCarthy (53 games and 45 goals) and half-back Daniel Bell (66 games and 1 goal) are among a handful of Tigers who could consider themselves unlucky not to gain selection. Adelaide young gun Darcy Fogarty would be expected to qualify for the team if he continues to show promising signs up forward for the Crows, while Will Gould captained the Croweaters at Under 18s level and is someone who could have a bright future after coming through the Glenelg program.