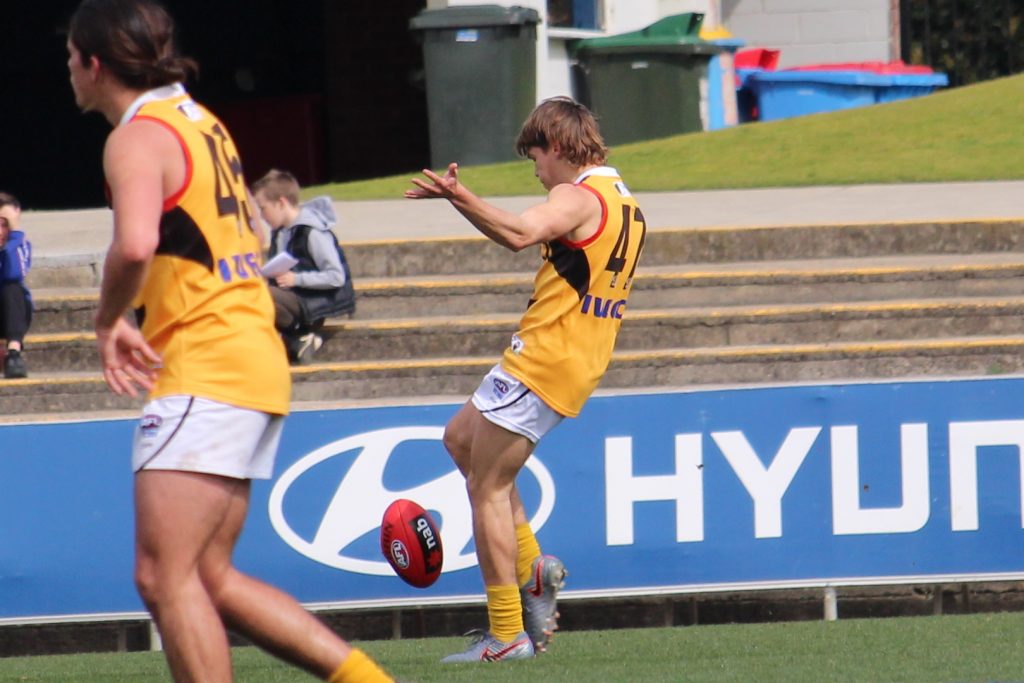 AS the postponement of all seasons commenced over the last few weeks, we head back to the pre-season where we sat down with a number of athletes across the country. In a special Question and Answer (Q&A) feature, Draft Central‘s Michael Alvaro chatted with Dandenong Stingrays’ Will Bravo at the NAB League Fitness Testing Day hosted by Rookie Me.

The 181cm prospect was lauded for his leadership and form during preseason despite a knee niggle late in the piece, and will be looking to back up his solid bottom-age season as one of two Vic Country Academy hub members from the Dandenong program.

Bravo was expected to start the NAB League season through midfield, but has shown his ability to have an impact off flanks at either end of the ground. The speedy customer averaged 10.9 disposals and a goal every other game across his 14 outings for the Stingrays in 2019, enough to earn him a spot in the Vic Country Under 17s side. Should a carnival go ahead, he is poised to feature in the Under 18 setup for 2020 as well.

WB: “It’s been pretty good. “I haven’t actually been testing due to an injury in my knee but it’s been a good day to get around the boys, push them on and watch them get some good scores.”

Have there been some decent results?

“Yes, we’ve got a pretty quick group. “I think we had about three boys who got sub-three seconds (20m sprint) so that’s pretty good.”

Coming off a solid 2019, how’d you rate your bottom-age year?

“It was a pretty good year. “I sort of came on a bit better at the end of the year, at the start of the year I was a bit nervous.

“But I just built into it and all the boys get around you and once you get involved, your confidence levels obviously rise and you start to play your game, do your thing. “It was a really good year with the boys and definitely a good experience.”

You showed good speed and a killer instinct as a mid-forward last season, are you hoping to continue in a similar role?

“I actually hadn’t played too much forward until last year and I think towards the end of the year I did play a bit in the midfield.

“This year we’ve been talking about with my pace, being able to run off half-back and to have a bit of a run through the midfield. “But whenever they need me obviously I can go down forward as well so I think it’ll be good for me to play in all different positions.”

What are some of the things you’re looking to develop to fit into those roles comfortably?

“Just understanding the (defensive) structure, how they like to move the ball and their defence. “Obviously a big motto we have is always defence first so I think just working with them and understanding everything they like to do would be good to have a big year.”

You’ve got a decent bottom-age crop and top-agers like yourself and Clayton Gay in the Academy, how do you think the Dandenong squad stacks up?

“I think this year already we’ve been doing pretty well. Considering we’ve all got a pretty good bond, I think that really helps. “Everyone always gets around each other, obviously the boys are pretty skilful and we’re pretty versatile with our skills around all three (thirds) of the field. “Our forwards, mids, and backs, we’ve got some strong players throughout them.”

Who are some of those boys you’re looking forward to playing alongside?

“Definitely Clayton Gay, obviously us two have been going through Vic Country together which is pretty cool. Bayleigh Welsh through the midfield and James Thomas off the backline.

“We’ve got a new player who has never played at this level, Declan Cole. “He’ll probably play a bit through the midfield so that’s pretty exciting. “We’ve obviously got a lot of boys who haven’t played in this kind of environment before but I think they’ve all bonded to it really well and it’s going to be an exciting year.”

How was the step-up being around the Vic Country hub?

“It’s been really good. “Obviously to be able to go to that next level and see what it’s all about, how quick it is.

“You make a lot of mates out of it, all the boys out of Vic Country are really good blokes, they’re all really warm and inviting so I think that’s really good. “Going into NAB League as well from Vic Country I think it’ll help a lot.”

What are some of the goals you’re looking to tick off in 2020?

“Just to be the best player and person I can be, to help everyone in my team that needs help and in Vic Country as well, just to always be there.

“To bring some bottom-agers under my wing and help them out when they’re finding it hard, just like how last year I was pretty nervous and wasn’t playing my game so I know a few of the boys this year might be the same.”