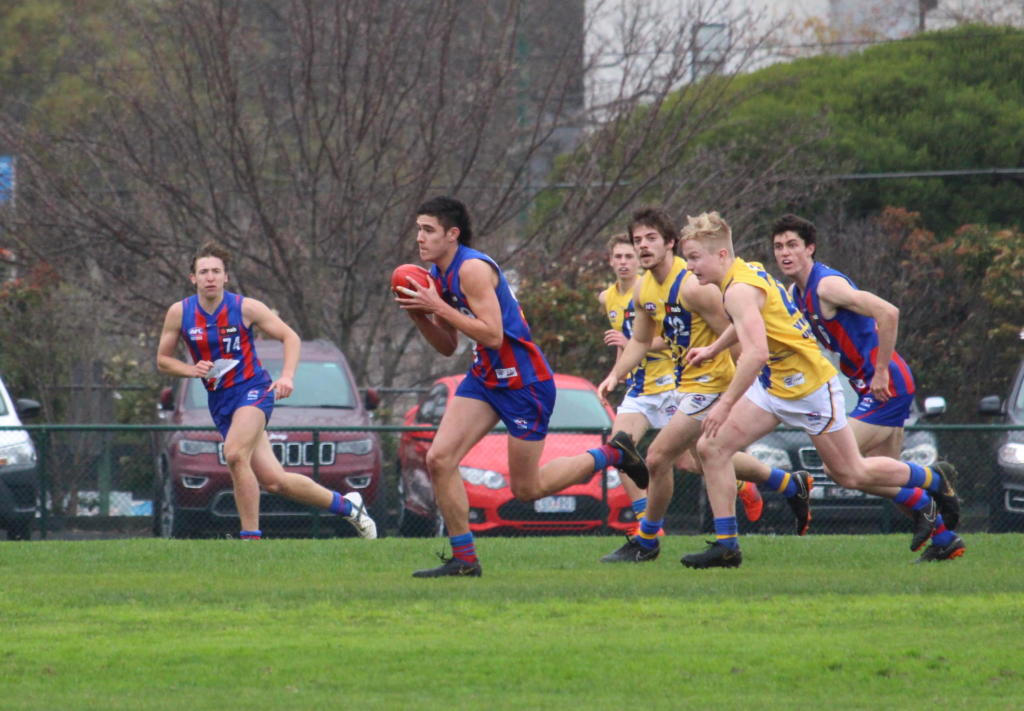 Next under the microscope in our AFL Draft Watch is Oakleigh’s Reef McInnes, a Collingwood Next Generation Academy (NGA) member who contributed to the Chargers’ 2019 NAB League premiership. The 192cm prospect was pushed out to the forward line at times last year, but thrived in his more suited role as an inside midfielder. One of his more notable outings came in that position for Vic Metro’s Under 17s side, but he was just as effective inside 50 for the Chargers and in the Under-17 Futures All-Star showcase.

McInnes continues to step up in showcase games and did so here with a solid display of ball winning across the day. Starting in midfield, McInnes proved he was more than an inside workhorse with his poise on the ball and decision making when hemmed in.

He has surprising agility at times – much like GWS Academy product Tom Green and Carlton’s Patrick Cripps – which helps to get him out of trouble on top of his strength in the tackle.

He went on to become influential up forward, finding separation on the lead and almost pulling in some strong marks. It proved a shrewd move, as McInnes booted two goals; the first coming from a 50m penalty, and the second shortly after with a classy snap from the tightest of angles.

The Collingwood NGA prospect looks to be another great find for the Magpies, and he had some sort of start to the game. McInnes was strong from the get-go, winning the very first clearance and working hard to impact a number of contests around the ground – he was involved in just about everything.

His clean hands, strength in the contest, and tackling made him the dominant inside midfielder, but his spread and props in traffic bode well for a well-balanced game. McInnes was a little quieter as the game wore on, but racked up 24 disposals, nine tackles, six clearances, and four inside 50s.

One of Oakleigh’s best and was a bigger body in terms of height in the midfield for the Chargers. He had a massive first term and looked good around the stoppages, winning a number of big clearances from in close, and set up scoring opportunities with nice kicks inside 50.

He is able to get his hands free when tackled and had a shot on goal in the first term but his kick was rushed and it went to the left. McInnes showed good decision making ability when in congestion, picking the right option when handballing clear and stood tall against a number of opponents.

McInnes was dominant for the Chargers, highlighted by his two goals, 29 disposals, five tackles and five inside 50s. The impressive display was a testimony to McInnes improved recent form and he was the best midfielder on the ground. With his draft stocks rising after outings such as the weekend, McInnes is one to keep an eye on for next year.