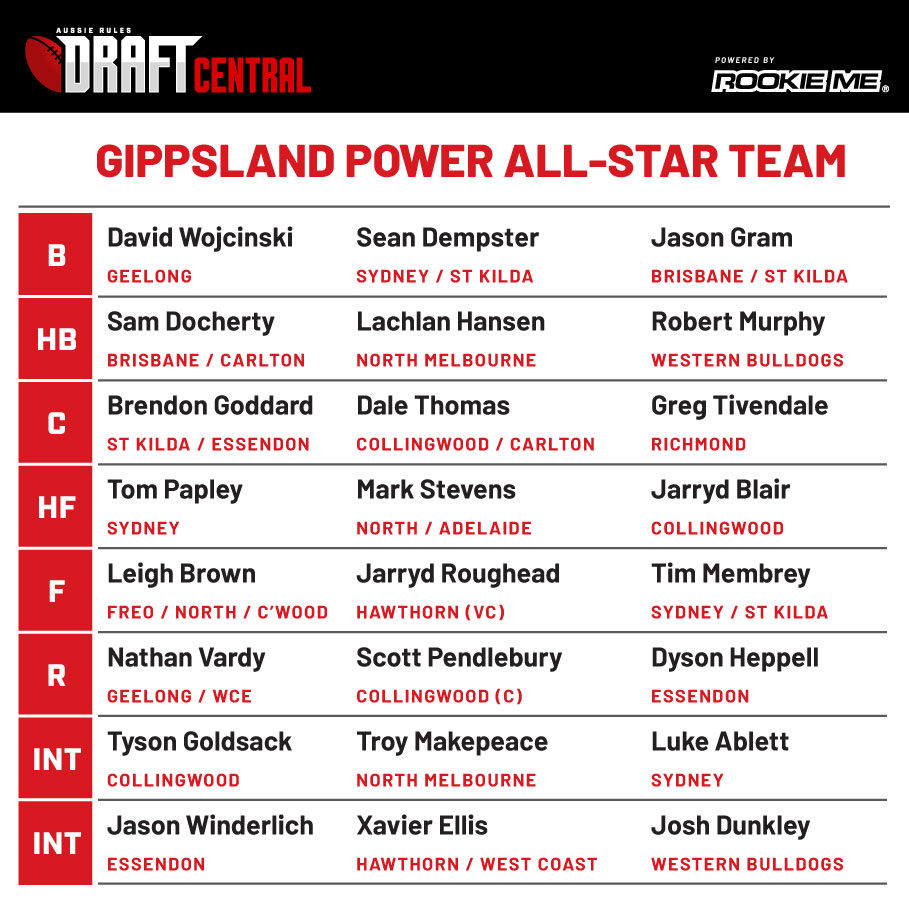 GIPPSLAND Power has a really solid All-Star team. With a nice mix of toughness and class, the Power have a lot of versatile options making it a dream for any coach. From a classy midfield to key position utilities and running half-backs, the Power have a team that could match it with most others in this series.

The team has a nice balance across the board in terms of smalls and talls, as well as some nice depth off the bench. The Power would be able to size up well against most oppositions and have no shortage of captain nominees with an array of AFL captains past and present in the team. In this scenario though, Collingwood skipper Scott Pendlebury will lead the team out after being voted the Power’s All-Star Player of the AFL Era via our Instagram polls.

The defence has a nice balance to it, with Sydney and St Kilda key defender Sean Dempster and North Melbourne big man Lachlan Hansen able to take the key position players. Tyson Goldsack provides some good height off the bench and could play tall or small. In the back pockets, a couple of underrated players in David Wojcinski and Jason Gram slot into the team, with Wojcinski no stranger to success with three flags to his name.

The real X-factor is off half-back where Sam Docherty and Robert Murphy provide some elite talent. They will bring the run out of the back 50, and with both Wojcinski and Gram able to also add rebounding prowess, the Power would be able to cover the slower key defenders in this instance. Docherty could also move into the midfield if needed, allowing Goldsack to add a third tall if the opposition side tried to stretch the defence. Xavier Ellis is another could come off the bench and play half-back, or push up to a wing.

Class with a capital ‘C’ is the best way to put it. Pendlebury is Mr Dependable having the most accolades of anyone in the side thanks to six All-Australians, five best and fairests, four All-Australian 40-squad nominations, a Norm Smith and 194 Brownlow votes. He is joined in the middle by two-time All-Australian and one-time best and fairest winner Brendon Goddard, with former Magpie turned Blue, Dale Thomas, and current Bomber Dyson Heppell rounding out a strong core. Goddard could also play defence or forward, which gives the Power great versatility in the line-up.

Greg Tivendale is the odd one out in the sense that his career ended when most of the other midfielders in this group were starting to hit their straps. Off the bench, the Power has a number of options from which to rotate, including Troy Makepeace, Luke Ablett, Jason Winderlich and Josh Dunkley. With limited ruck options, Nathan Vardy gets the nod after 68 games and 42 goals – second lowest only to Dunkley (66 and 36).

A tall forward line to be fair, with Jarryd Roughead the key centre piece and sole Coleman Medallist in the side. He also has success with four flags to his name and stands alongside fellow tall, Leigh Brown who could play anywhere on the field, but we have slotted him in the forward pocket. Mark Stevens at centre half-forward booted 123 goals in 122 games playing in a premiership with Adelaide to make it a three-prong tall attack.

Tim Membrey could be argued as even a fourth tall, but he adds a slightly different element to the others, and he makes the side off 169 goals in 92 games. The two smalls are Tom Papley and Jarryd Blair who would create some goals out of nothing, and Papley is one who could become something really special in the years to come. There might not be too many options coming off the bench from a forward perspective, but Dunkley could roll through here if need be.

With the talent at the Power’s disposal, the depth wains a little outside the top 25, but there are a number of players who were able to forge out 90-plus game careers such as Tomas Bugg (94), Andrew McQualter (94), Ben Robbins (92) and Koby Stevens (91), while Brent Macaffer won a premiership with the Magpies playing a strong role in 2010.