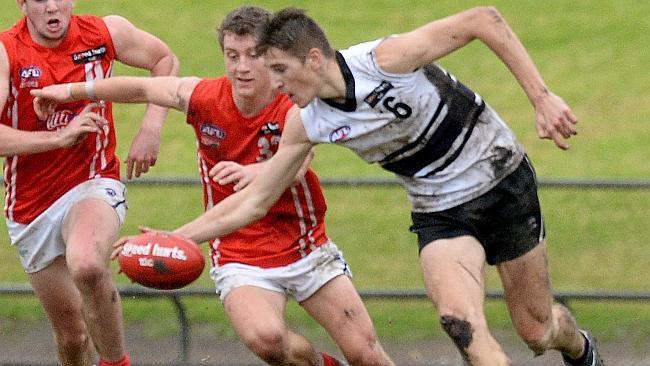 IF you are missing footy like we are, then let us somewhat salvage that with a look back in a new series of Classic Contests. In today’s contest we look at one of the would-have-been Round 9 clashes in the NAB League this year between the Geelong Falcons and Northern Knights. In this edition, we wind back the clock to 2013 to relive the closest match between the sides in a decade.

Back in 2013, TAC Cup outings became somewhat of a foregone conclusion for the Geelong Falcons. They sat atop the ladder at 12-1 after 13 rounds, six games clear of the eighth-place Northern Knights who they would meet next. The previous clash between the two sides that year was a one-sided one which saw Geelong salute to the tune of 96 points at Kardinia Park, only consolidating its status as the team to beat at that point.

But things would turn out a little differently in the pair’s next outing, with Northern able to match the Falcons for draftable talent on the day and sneak home by seven points. The Knights boasted their two top-aged draftees for the year in Marcus Bontempelli, while also fielding a bottom-aged group which included premiership Tigers Jayden Short and Jason Castagna. Lewis Taylor was Geelong’s leading top-age prospect as one of seven eventual draftees over the next two years to grace the Falcons’ lineup.

After a first term assault which saw the home side boot four goals to one, the Falcons stormed back hard to level the ledger at the main break. They could have fared much better though, with an effort of 4.10 in front of goal laying bare Northern’s superior handling of the conditions. It was game on and effectively a clean slate heading into the second half with the result hanging in the balance.

While the Falcons would sure up in their forward half with 4.2, Northern showed off some attacking flair with 7.3 as the game began to open up. Taking full advantage of the scoring end, the Knights set up what turned out to be an unassailable three-goal cushion at the final break. It was just enough to hold off the Falcons’ fourth quarter charge, shutting up shop quickly and strongly enough to ensure the four points remained in Preston.

Joshua Turner was named best afield for the winners with 29 disposals, 10 marks and a goal, with Lennon (24, 11, one) and Bontempelli (21, seven, two) not far behind. Bottom-aged Parade College pair Garrett McDonagh and Josh Iacobaccio were also named among the best half-dozen. Richmond duo Short and Castagna each booted two goals, while Fremantle mature-ager Sam Switkowski and Essendon draftee Kyle Langford managed hit the scoreboard, too.

For Geelong, NTFL premiership player James Tsitas was recognised as best for his mammoth 42-disposal and two-goal effort, while Billy Beardsell booted 2.5 and West Coast’s Jackson Nelson (18 disposals, five marks, five tackles) was the sole draftee among the best six. Taylor somehow missed out despite having 38 disposals and eight marks, while the remainder of the Falcons’ draftees were kept relatively quiet.

After claiming the minor premiership with a 14-3 record, the Falcons would only make it as far as the preliminary finals. They were eliminated by eventual premier, Eastern, a fate which Northern suffered at the semi-final stage after accumulating a 9-7-1 record good enough for sixth spot.