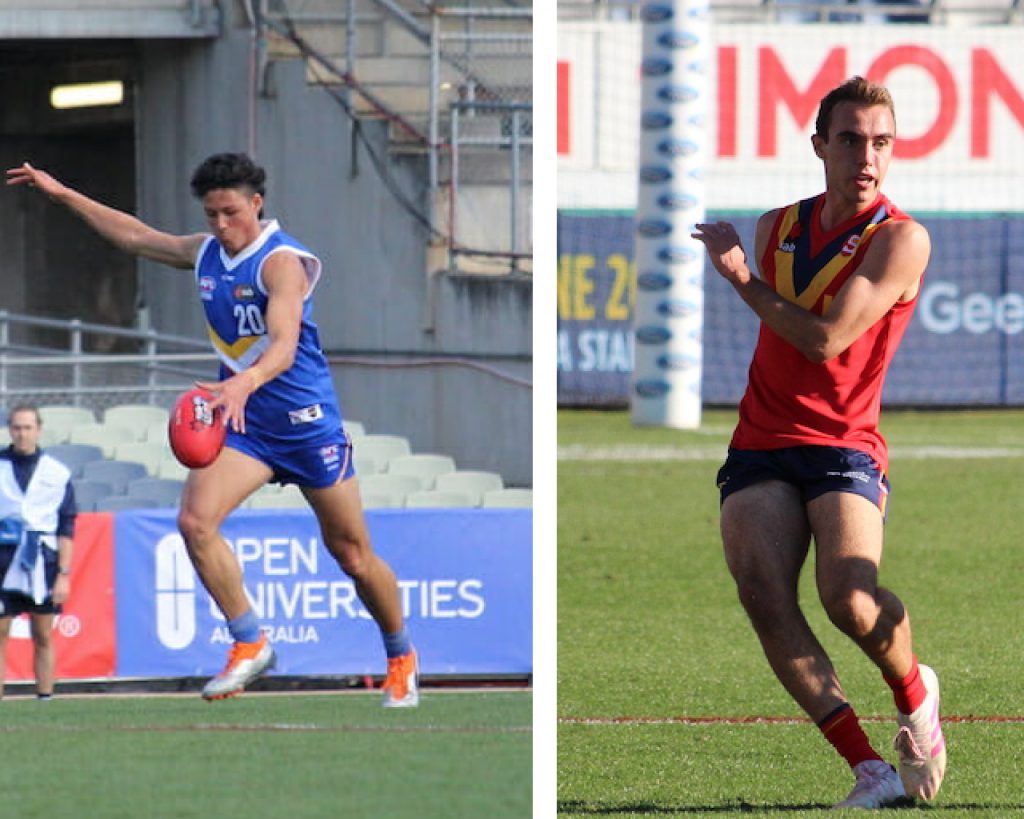 The next pair under the microscope ironically played together twice last year; for the Australian Under 17 side in April, and in September’s Under 17 Futures showcase fixture. 2020 Eastern Ranges captain Connor Downie and Glenelg’s Luke Edwards are those two players, having progressed through similar journeys despite hailing from different states. Both prospects are also already aligned to AFL clubs, with Downie a Hawthorn Next Generation Academy (NGA) product, and Edwards eligible to nominate as an Adelaide father-son candidate.

Downie was an integral figure in Eastern’s run to last year’s NAB League grand final, proving a reliable and versatile member of the squad. He was also one of the rare bottom-agers to feature for Vic Metro in the 2019 National Championships, running out for his sole appearance against Vic Country to open the carnival. Having played mostly on a wing and off flanks at either end, Downie’s solid build and forward-driving attributes see him poised for more inside midfield minutes throughout 2020.

Edwards is a player in a similar boat, but instead looks to make a return to the engine room having been employed as a rebounding defender in last year’s Under 18 championships for South Australia. Remarkably, Edwards has not put on any height since his Under 16 campaign in 2018, but remains a big-bodied type through midfield at 187cm and 80kg. The son of Crows great, Tyson broke through to SANFL Reserves level for Glenelg as a bottom-ager and may well make the step up to League football as a top-ager when SANFL competitions return in June.

Note: Edwards did not participate in the scheduled South Australian preseason testing day.

Attempting to compare these two athletically via preseason testing data is obviously a fruitless task given Edwards did not participate in South Australia’s combine, but we can still extract something out of Downie’s results. The Victorian’s power off one side shows in the 15cm gap in his running vertical jumps, and he definitely uses that leap to compete in the air, while also boasting a penetrating left foot kick. Downie’s time of 3.11 second across 20 metres is not exactly flattering, but his constant forward movement and overlapping runs to chain handballs better show his ability to gain meterage in quick time. Additionally, a decent agility test time of 8.48 seconds allows Downie to evade opponents and is an area Edwards also thrives in through midfield.

Downie may have been the slightly more capped player as far as these statistics go, but was able to showcase some of his best traits on the outside. His NAB League average of 16.4 disposals is a decent output for a bottom-ager, but his ability to impact along the line really comes to the fore in his combination of 3.8 rebound 50s and nine goals for the season.

Edwards’ more inside oriented role shines through in his SANFL Under 18 numbers, reflecting a dominant stoppage game going both ways with 5.1 average clearances, 4.6 inside 50s, and 5.8 tackles. His overall disposal output is also greater, and his slightly bigger frame has something to do with that at Under 18 level.

In terms of their National Championships form, Edwards proved his worth as a consistent contributor across all four games, while Downie could only crack one outing in the stacked Vic Metro side. Again, Edwards’ overall output is more significant, but this time in a different role across half-back as he upped his intercept/rebounding game and maintained similar tackling numbers.

It would have been handy to see the pair go at it when Vic Metro met South Australia, but we will have to wait until this year’s carnival – should one go ahead.

You will be hard-pressed to find a more complete midfield game that Edwards’ display in Glenelg’s Round 14 loss to North Adelaide; the prime mover won plenty of his own ball (32 disposals) both at the stoppages (nine clearances) and on the spread (seven marks), while staying relevant defensively (10 tackles) and impacting the play going forward (nine inside 50s, one goal). It is the kind of game which makes you think a permanent midfield move is a no-brainer for Edwards, and shows how far developed he is for his age.

Downie’s chosen game came in as one-sided a game as you’re likely to see, with Eastern holding its opponent to a total of five behinds while piling on 18.8 (116) in tricky Ballarat conditions. Downie was a key exponent of the onslaught, collecting a disposal tally two touches shy of his season-best, while impacting the play up either end and at the stoppages. His three goals were sweeteners, showcasing his penetrating kick from range as well as his underrated overhead marking in the face of a howling breeze.

Conveniently enough, the two share a pair of identical strengths. The first listed for either player is versatility, something they will both be itching to further showcase in expanded roles should the action return in 2020. Edwards has gone from playing permanent midfield, to shifting to defence, to now being poised as a midfielder once again. Meanwhile, Downie is a damaging proposition all the way along the line from half-back, to half-forward, and potentially inside the engine room.

The other shared trait here is their efficiency, with Downie a safe bet on his left side, while Edwards is ruthless on his right. Downie seems to have a touch more penetration and loves to go long, but Edwards is a touch more accustomed to finding the best option and hardly making a mistake. Edwards’ disposal efficiency of 90 per cent, albeit with a much lower output, only proves his case as a poised user of the ball. Downie may waver a touch more, but can cut teams up with his metres gained and put the ball in more dangerous areas.

As captain of the Eastern region, Downie also gets a tick for leadership, and he could be in contention for the same honours at representative level given his experience there already.  Edwards’ remaining strengths tie into different roles on-field, with his contested game suited to midfield minutes, while reading of the play comes down to his defensive duties. Edwards’ frame also helps in one-on-one defensive situations too, adding to that intercept and rebound style from the back half.

The two again have similar improvements to make, and are ordered in terms of importance. Downie’s inside craft will need a lift if he is to spend more time at the centre bounces, with his chaining and penetrative style on the outside currently more suited to his skillset. He has the frame and class to make the move, but isn’t quite there off bottom-age form. Part of that will be adding an element of explosive speed, which is not currently reflected in his 3.11-second 20-metre sprint time. He covers the ground well over time, but needs that burst at the stoppages.

Similarly, Edwards has been working on that five-step burst in congestion to get away from would-be tacklers, with the pressure at the next level too much for pure strength to repeatedly handle. He can get away with being caught slightly in traffic against juniors, but will be brought down in those situations upon entering the elite system. Another area Edwards said he would like to work on during preseason is his contested marking, being able to crash packs and be an even more damaging interceptor.

Of course, it is often difficult and perhaps harsh to split hairs when looking for areas of improvement, but even the best prospects have room to grow to become more complete players.

Gave a glimpse into his role for next year with a mix of time between his usual wing/half-back position, and in the midfield. Downie’s willingness to get on his bike at every opportunity and move the ball forward was a feature, fitting the metres-gained role well on the outside. He would often dish off on the move and continue his run to get it back, ending his plays with a long kick forward on his customary left side. He may well continue his shift towards a more inside role and has the size to do so, but arguably looked more damaging on the outer as he has done all year.

The potential Adelaide father-son has composure beyond his years and looks a versatile type. Starting in his usual half-back role, Edwards showed great poise in his disposal coming out of defence and worked hard to impact the play further afield once he had released the ball himself. His intercept marking game was also sound, reading the ball well in flight to get in the right position on defensive wing. He is the accumulating type in the backline, but looks a different player once thrown into the midfield with his strong hands and frame allowing him to play that inside game. His smart handballs out of congestion were terrific in the second half, especially at centre bounces, and he would benefit from spending more time there.

Both of these talents have been highly-touted for a good amount of time, and rightly so. Edwards has the obvious and added pressure of being a father-son prospect identified from a young age, but has performed well in his own right and may even blaze his own trail by nominating for the open draft. Similarly, Downie is already linked to a club but should end up following through with the tie and will cost the Hawks a decent amount of draft points.

Lacking in a couple of athletic areas may see the two slide down the order, but Edwards is one who could be right up there should he stamp his claim as an inside midfielder. Downie’s versatility is a massive plus, as is his impact on the outside. While it would be tempting to see him also grow into an inside role, it seems his best traits fit the wing, or a half-back flank in particular.